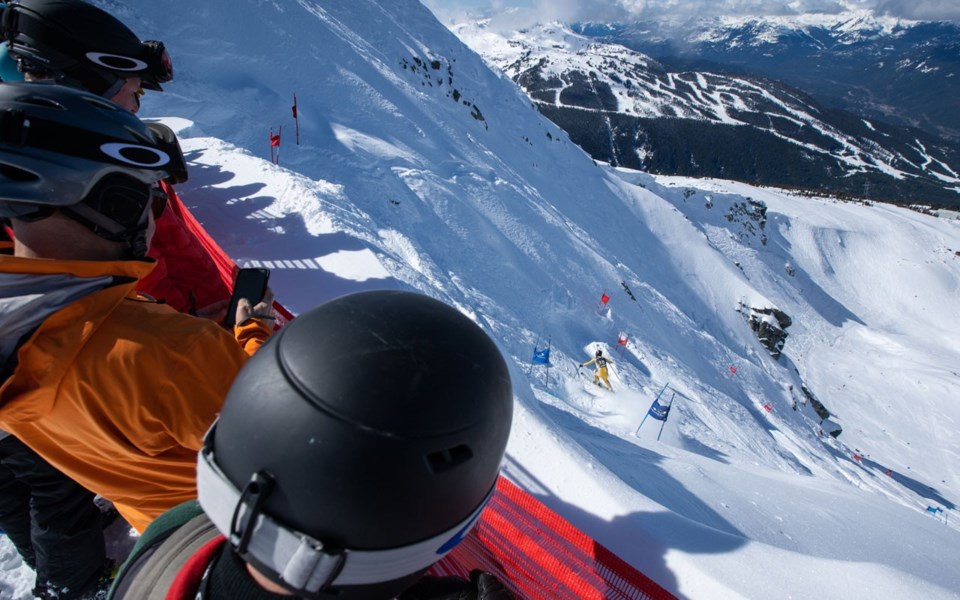 The World Ski and Snowboard Festival (WSSF) unveiled the first chunk of its 2020 schedule earlier this month, and some changes are coming in Gibbons Whistler's first year of ownership.

In addition to an already-announced expansion of the schedule to once again cover two weekends, a new Banked Slalom event is the most significant on-mountain addition, with the finals slated for April 25 in Skier's Plaza.

Wanting to ensure the company's ownership of the festival started well, Gibbons Whistler CEO Joey Gibbons consulted with several athletes before the season to ensure that he was on the right track.

One of the recurring themes was that after a long, stressful and tiring season, it would be welcome to do something a little different.

"[For] all of them unanimously, it was about 'Let's do something fun. Let's get everybody together and do something that the community can watch and get excited,'" he said.

Knowing that several of his friends regularly hit up banked slalom events at Mount Baker and Mount Seymour, Gibbons felt it seemed like a fit to bring something similar up here.

"It would be super cool. We could put our own spin on it, put it right at the base of the mountain and finish into a big crowd," he said. "I just kept learning about it, listening to it. I brought it up with Seb [Fremont], who runs events on the mountain and he got excited about it.

"It just started creating its own vibe."

Gibbons added that with qualifying rounds set for the days prior to the finals, skiers and snowboarders can come give it a shot before the April 25 finals, which he hopes will draw 5,000-plus people to Skier's Plaza.

A release described the set-up as a "winding course filled with whoops, rollers, kickers, and banked turns," and Gibbons expects to have a clearer vision of how it will look after an upcoming meeting with the athletes.

"I really want to make it their idea," he said. "[We'll] develop the format with them."

Gibbons added that he plans to hold similar consultation for the big air contests, garnering feedback from athletes on considerations such as the jump size and the format.

Returning events include the Saudan Couloir Race Extreme (April 17), big air (April 18) and Halfpipe Fam Jam (April 19). While registration has only recently opened and little was confirmed at press time, Gibbons said fans can expect World Cup, X Games and other professional skiers and snowboarders to come out.

"A lot of them are away competing all year long and they want to come back to Whistler when it's that time of year and the sun's out," he said. "They want to really just get together with all their fans in the community and have some fun.

"We feel like this event is going to hit that perfectly."

On the list of events, the big air contests did not retain the Halaw Snowboard Invitational and Sp'akwus Ski Invitational names they utilized in 2019, but Gibbons, noting that Whistler Blackcomb (WB) is taking the lead on organizing the on-mountain events, said those monikers may yet return.

"I know how important it is for the mountain to work with the First Nations, so I'm sure it'll continue if everyone's on board for it," he said.

A WB spokesperson said in an email that naming discussions had not yet occurred.

As for the multimedia events that are near and dear to festivalgoers' hearts, Pro Photographer Showcase (Wednesday, April 22), Intersection (Thursday, April 23), and Swatch 72hr Filmmaker Showdown (Friday, April 24) were all confirmed in the release. However, instead of taking place at Whistler Conference Centre as in years past, the site will also be Skier's Plaza.

"The magic always takes place when the mountain meets the village," Gibbons said. "The more we can bring people together in that environment, the closer we can get to that energy and the better we will be."

While the stage will be covered, and nearby Gibbons Whistler watering holes such as WB-owned GLC and the Gibbons-owned Longhorn Saloon offer some shelter, Gibbons himself expects attendees can handle some inclement weather if it shows up.

"For the most part, there's been a lot of years where those events have taken place when it's been raining, but with the gear that people wear these days, people often come dressed prepared for it," he said.

Gibbons added that though Multiplicity wasn't on the initial schedule, the planning process is underway and more details will be announced soon.

Gibbons said this year's slogan is Better Together, and so far, he's been proud to see the community coalescing to make the festival a success.