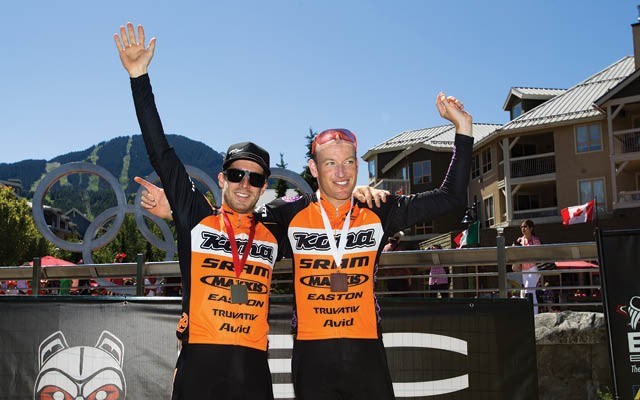 looking to repeat Kris Sneddon and Spencer Paxson celebrate their one-two finish in the Men's Solo Epic class of the BC Bike Race in 2013. The two Kona Factory Team riders were among the leaders after the first three stages of this year's race, ending in Whistler on Saturday, July 5. file photo

Hundreds of mountain bikers from around the globe are set to arrive in the Sea to Sky corridor this week when the BC Bike Race finishes with stages in Squamish and Whistler over the final two days.

As the seven-day event — which first tours through the trails in North Vancouver, Vancouver Island and the Sunshine Coast — has become a race that many bikers hope to cross off their list at least once, it's something that Graeme Fitch has been able to check off every single year.

The Whistler resident is participating in his eighth edition of the BC Bike Race, and is believed to be the only person to ride the event every year since its inception.

"It's a fun way to spend a week going mountain biking every day," Fitch said last week before the race got underway. "It's kind of like summer camp for grown-ups, but on a bike.

"From my point of view, it's a great opportunity to get out and have a fun race, or a 'BC Bike Ride' for us old guys who are just out riding around, not too close to the front."

More than 20 countries are represented amongst the field of participants this year, and Fitch said it's a pleasure to see the international riders' response to biking in his backyard each time.

"It's been a great event to watch grow over the years, and the variety of people from different countries that come out," he said. "It's fun to be part of a mix of different people who have never been here before, and they're just amazed at what we have to offer."

The race got underway on Sunday, June 29, with the opening stage in North Vancouver before ferrying over to Stage 2 in Cumberland, then back across the Strait of Georgia for the third leg in Powell River. Participants also had to complete a ride from Earl's Cove to Sechelt, then from Sechelt to Langdale, before arriving in Squamish on Friday, July 4, and Whistler the following day.

Although the majority of the race field has travelled considerable distance to ride the seven stages, several Sea to Sky residents are factoring into the results early in the event.

Squamish's Greg Day and Quinn Moberg had rocketed to the top of the Open Team of 2 standings after three stages, hitting the finish line in Powell River with a cumulative time of six hours, 47 minutes, 12 seconds. That gave them a 44-minute lead over the nearest team, Swiss riders Joerg Franke and Ruben Wey.

Fitch and partner Greg McDougall had clocked a time of 10:29:44 and were sitting fifth in the Veterans 100 Team of 2 class through Tuesday, even if overall standing wasn't the biggest concern for the Whistler rider.

"Stay in one piece is the first goal. Finish really, really tired every day, but not so tired I can't have a beer to celebrate the day (is the other)," Fitch laughed when asked what his aims were for the week.

"We have lots of little rivalries within the groups, too. We're not necessarily riding for first place, but we're often racing for bragging rights with our friends."

Whistler's Michael Robinson, who was an impressive fifth overall in the Men's Solo Epic class in 2013, posted top-15 finishes on Stages 1 and 3 this week, but some difficulties during Monday's leg in Cumberland appear to have torpedoed his hopes of matching last year's result.

"It all fell to pieces after about Hour 2 on the second day," Robinson said in an email on Tuesday. "I went from racing in a solid group to survival mode in what seemed like a blink."

Feeling ill, Robinson said he had to spend some time recovering at a mid-course aid station and needed a drip bag following the stage. He returned to form in Powell River and said he'll enjoy what's left of the race, even if a top overall finish is no longer in the cards.

"It's such a good vibe at this race that you can't help but take from that," he said. "There are four more days to go and I hope things just get better as the trails unfold."

The defending men's and women's Solo Epic champs held small leads heading into Day 4 on Wednesday — Kris Sneddon was less than two minutes ahead of Barry Wicks and Spencer Paxson on the men's side (all three are part of the Kona Factory Team), while Wendy Simms clung to a two-minute gap over American rider Lea Davison.

Friday and Saturday's stages in Squamish and Whistler both get underway at 9 a.m. The first races are expected to reach the start/finish area at Brennan Park by 11:30 a.m. on Friday, while the leaders should hit their final finish line at Whistler Olympic Plaza on Saturday before 11 a.m.