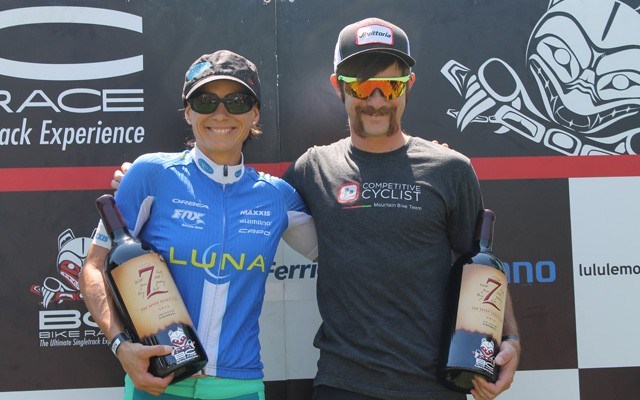 ONE IN, ONE OUT Texan Tristan Uhl will be back to try to defend his B.C. Bike Race title, but Katerina Nash has Olympic dreams. File photo by Dan Falloon

A decade in, the B.C. Bike Race must be doing something right.

With a wait list of 700 in an event that accepts only 600 riders, director of marketing Andreas Hestler said trying to create the best rider experience is key. This year, that includes some schedule and course changes.

Here in Whistler, there were some fairly significant changes made to the route as riders will begin in Cheakamus Crossing and traverse the west side trails before coming in to finish at Rainbow Park next Wednesday, July 13. The race officially kicked off July 7 in Cumberland.

"Every year, we try to make the course better and evolve so it's a better experience for the riders," Hestler said. "In that sense, we're very lucky in British Columbia to have new inventory almost every year to work with. It doesn't have to be a fixed course. We have some flexibility to move and change things and that's a wonderful opportunity."

Hestler said that with many local partnerships and sponsorships, the race tries to be the least invasive it can be. Though some visibility will be lost with the move from Whistler Olympic Plaza, fans can still check out the finish in Rainbow Park and, of course, the start from the Whistler Athletes' Centre.

"For Whistler, we played with all sorts of different trails and venues. We've always been fond of the west side trails," Hestler said. "Highway crossings are always a logistical nightmare, so we try to do that as little as possible.

"Rainbow (Park) is awesome and it's on the west side of the highway. We still have to cross the highway but it's such a beautiful venue."

Because of camping and ferry crossing limitations, the race is unable to expand its 600-participant cap. But Hestler said he and his fellow organizers like keeping it on the smaller side as well.

"There's less wear and tear on the trails we go through," he said. "It's an intimate event at the 600 number. You kind of get to know everybody over the seven days. Not everybody, but a lot of people."

Another adjustment this year was the schedule. The race traditionally began and ended on consecutive weekends, but this year, Hestler said the organizers are experimenting with a Thursday-to-Wednesday slate.

"When we discussed internally the midweek to midweek (schedule), I almost had a heart attack. I'm a traditional biker from way back and everything was always weekend-to-weekend and weekend events," Hestler said. "What we realized was the participants who plan a year ahead to come to B.C. Bike Race, they've got a year to plan it out. They're building a holiday, usually, around it. It's not a get in and get out type of event... They're not really short on time.

"It's a little bit tougher on our crew. It's not as easy for them to come and be part of the event for that."

In addition to easing some logistics, Hestler said differentiating from other events was a factor in the decision.

"Secondly, working with sponsors and our communities, if we can drop 1,000 people into Whistler on a Wednesday instead of being another weekend event, that's listening to how to be a better partner," he said. "Let's try it and see how it goes."

On the men's side, Texan Tristan Uhl will return to try to defend his title, while Squamish's Quinn Moberg, last year's fourth-place finisher, seems to be the top local hope. American Olympic hopefuls Spencer Paxson and Stephen Ettinger will attend, as will French marathon champion Frederic Gombert. Canadian 2014 marathon champion Cory Wallace, a B.C. Bike Race veteran, is also in the men's field, which makes up roughly 85 per cent of competitors.

On the women's side, though 2015 women's winner Katerina Nash is pursuing an Olympic berth and will not return, 2008 team winner Kelli Emmett and Samantha Runnels are anticipated to make some noise. Briton Hannah Barnes was slated to race, but dropped out after suffering a concussion in Switzerland last week.

Through the first nine years, Graeme Fitch is the only rider to have completed every kilometre. For his part, Hestler has begun every stage, but has encountered mechanicals along the way.