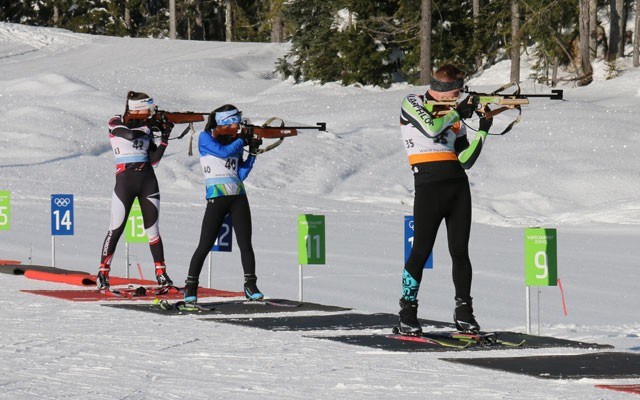 ON TARGET The B.C. Biathlon championships will welcome over 100 competitors to Whistler Olympic Park on Feb. 13 and 14. Photo submitted

Some of British Columbia's best skiers and shooters will give it their best shot at Whistler Olympic Park this weekend.

The 2016 B.C. Biathlon Championships, hosted by Sea to Sky Nordics, will run events this Saturday and Sunday (Feb. 13 and 14) at the Callaghan Valley site. Sea to Sky Nordics chair Clayton Whitman expects an impressive turnout for the event, which will welcome competitors from Yukon and Washington State in addition to every reach of the province. Whitman said on Feb. 9 that 90 people were registered and he expects another 25 to sign up before the first shot is fired. Roughly 35 local athletes will be spread among the 16 different age categories.

"It's been a great snow year so the course and range are in great shape. There's plenty of snow for the event," he said.

In addition to crowning the best in the province, the competition is also a last-chance qualifier for next month's Canadian Biathlon Championships in Valcartier, Que. With an impressive venue, Whitman said, the stage is set for some drama.

Those who want to catch all the action will be welcome, as biathlon is impressive to watch up close.

There is a $15 vehicle fee to enter the park, but no other cost associated with watching the competition.

The pair finished sixth and seventh, respectively, after Germany's Julia Taubitz blazed to the win. Graham was 1.541 seconds back while Apshkrum was 1.59 seconds off the pace. Taubitz was 0.651 seconds ahead of Tina Muller and a full second up on Alisa Dengler as the Germans swept the podium.

As for the doubles, the pair of Matt Riddle and Adam Shippit did not finish their run. Austrians David Trojer and Philip Knoll took the win, followed by Germans Manuel Stiebing and Florian Loffler, and Nico Semmler and Johannes Pfeiffer.

Canada did not place in the team event, as the Riddle/Shippit sled did not complete its run. Apshkrum and Klimchuk-Brown were tabbed for the two singles runs. Germany took the win, followed by the Americans and Austrians.