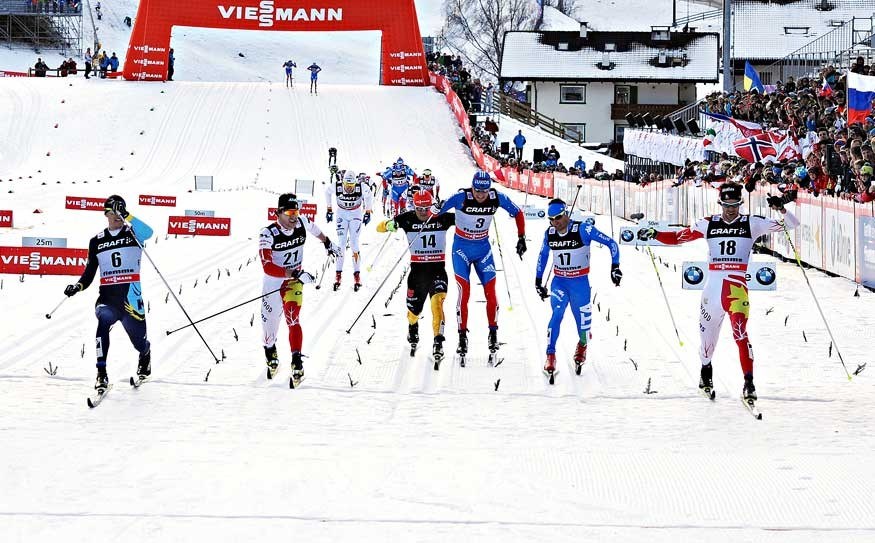 The Canadian Cross Country Ski Team, also called the Nordic Knights by fans, wrapped up the seven-race and three-nation Tour de Ski with three more podiums, bringing the total to four — including the bronze medal Len Valjas picked up in the third stage, a skate ski race at Val Mustair, Switzerland.

In the sixth stage, Canada earned a double podium at the 15km classic race in Val Di Fiemme, Italy, with Valjas surging to a silver medal, followed by teammate Alex Harvey in third place. It was only the second time in Canadian history that two men have shared a podium, after Devon Kershaw and Harvey accomplished the feat with gold and silver in the finals last season.

Valjas, who's learned a thing or two about tactics in the last few years, stuck with the middle of the pack for most of the race before breaking away on the final sprint into the stadium.

"I ignored (the bonus times in the overall)," he said. "I was in 20th most of the way, until the third lap where I slowly started picking up spots. I made a real effort when I was in about 10th coming up that final hill. I just stuck to the skis in front of me and was able to slingshot down into the finish.

"I knew the finish stretch would be important today so I actually grabbed longer poles than I normally would have," added the six-foot-six racer.

Valjas came into this season with a hand injury, but is fully recovered — something that his double pole to the finish made spectacularly clear. He now has three World Cup medals to his credit, including a medal at the World Cup finals last season.

"This is all pretty surreal for me," he said. "I do feel comfortable in all classic races, but have some work to do still with my skate skiing. These races are all my favourite races and they set up pretty well for me. This whole tour has been amazing."

The finish was close, and for a while Valjas thought Harvey might have come up with the win. However, Alexey Poltoranin took the win by a tenth of a second. Just three-tenths separated Valjas and Harvey. Ivan Babikov was also close to the lead group, finishing eighth. Devon Kershaw was 21st.

It was Harvey's seventh career podium and his first podium of the season — although he had a few close calls with a fifth place finish and two sixth place finishes on the tour. "I just love this course, and to finish the Tour off with a podium feels great," said Harvey. "I was a bit rusty in the first lap, but felt good the last two laps. I was second coming up that last hill and glided down into the stadium for the finish.

"Every time I put on a race bib now I look to get on the podium. I know I can be there in both classic and skate skiing so it is just a really good feeling to get my first podium on the year. This is where I got my first last year as well so I am really happy, and it gives me a lot of confidence knowing the World Championships are here this year as well."

The final stage of the tour was a nine-kilometre skate ski pursuit race, with the last three kilometres on a steep, uphill section with a 28 per cent grade. Ivan Babikov has been Canada's top climber in recent years and proved it once again with a second place finish behind Sweden's Marcus Hellner.

"It feels so good, I am just so happy right now to be a part of this Canadian team," said Babikov, who started the day in 17th and finished seventh overall after passing 10 skiers on the gruelling course. "I'm super pumped. Our team pushed me really hard this summer to be better, and it is paying off."

As for why he's such a strong climber, it's a mystery to Babikov.

"I have no idea why I'm good," he said. "Where I grew up there were no hills. Everyone feels the pain at some point on the hill. Maybe I am able to cope with the pain a little better than others. People always ask me why I'm good at it and I don't know. I just love climbing and I just go with it."

Alexander Legkov of Russia went on to place first overall in the tour with a combined time of three hours, 29 minutes and 28 seconds on the seven stages, followed by three-time tour winner Dario Cologna of Switzerland in 3:29:47 and Maxim Vylegzhanin of Russia in 3:30:09. Babikov was seventh in 3:31:33 with personal bests in most events and consistent performances all around. Devon Kershaw, despite being blocked off the podium, placed a solid 12th in 3:32:26, while Valjas was 23rd. Harvey opted to save himself by not racing in the final stage and dropped out of the top 30.

No Canadian women took part in the tour this year. Poland's Justyna Kowalczyk won the title for the fourth straight year, followed by Therese Johaug and Kristin Stoermer of Norway. In total, Norwegian athletes took four spots in the top 10, followed by Finland with three.

The next stop on the World Cup tour is the team and individual sprint at Liberec, Czech Republic, taking place this weekend.