Birken cyclist rides for a reason 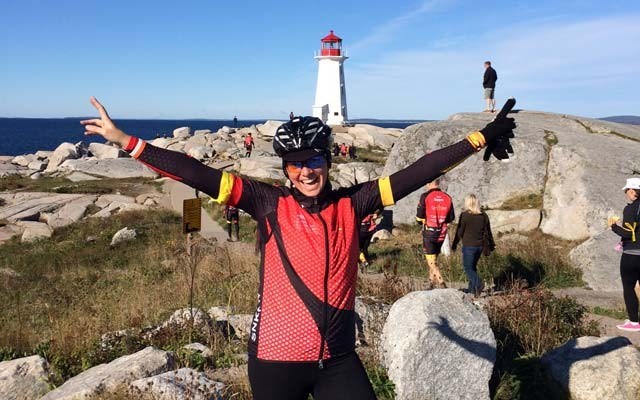 Birken resident Jennifer Lawrence has long had a connection to the Sears National Kids Cancer Ride and the Coast to Coast Against Cancer Foundation.

But she stepped up her commitment in a big way this year.

Lawrence rode her bike for seven days of the ride, now in its ninth year, as she sought to raise money and awareness to fight the disease.

"Eight years ago, my cousin (Nick) died in his first year of university from cancer and we as a family, we are mostly from Ontario except for myself, started a fundraiser in his honour," she said. "We were trying to figure out how we could get the money to a childhood organization. We stumbled across this organization.

"Any national rider is expected to raise a minimum of $25,000, so our family decided this would be a good way for us to alleviate some stress from a national rider because you have to do so much training. We would sponsor a rider every year. Since 2008, when he passed away, we have been sponsoring a national rider."

Nick's brother did the ride in 2013 and Lawrence, at that time, didn't really think it would be possible for her to participate. However, after continued encouragement from family, she decided to register in April and rode for seven days from Barrie, Ont. to Halifax. She had another family member to ride for, sadly, as cancer claimed her cousin Amanda after a decade of trying to treat it.

"I ended up being able to ride this year with two cousins, a fiancé of a cousin, and two of my aunts were volunteers who drove a motor home across the country. It was a pretty special year for me this year to join in and have that support across the country," she said. "From Barrie to Toronto, they had a ride-along day where family members can raise money and ride along for a day. That day, we had about 10 family members that rode along and then probably another 30 or 40 family members cheering us on at each stop."

Lawrence noted she hopes she can do the full ride among the national riders in the future, but at this time in her life, family and work commitments left her unable to complete the full ride.

The ride officially started in White Rock on Sept. 7 before wrapping in Halifax on Sept. 24.

Lawrence noted the riders in her group, in addition to covering 150 to 200 kilometres a day, also had commitments each day where they met community members and toured medical facilities in stops along the way.

"Along the way, we stopped at Sears stores where we met with families who have either lost children or (have) children that are battling cancer right now," she said. "We also visited all the oncology departments across Canada where the money is going to directly. We got to see doctors and people who work in the oncology departments to see where the money is going and to see how it's bettering these hospitals across the country."

Lawrence also noted all proceeds go towards the cause because volunteers perform tasks like driving the support vehicles and cooking meals, and sponsors cover costs and provide equipment. Sears, for example, offers three semi trailers with bunks as dorms that park in their lots at night. Riders have access to the store's restroom facilities overnight. Other sponsors allowed riders to use their showers after a hard day's ride as well.

Organizers are still counting the funds raised as donations from individual locations of the department store are still rolling in. The 2015 ride raised nearly $4.7 million to support childhood cancer research.