Boxers Bate and Wark each now 2-0 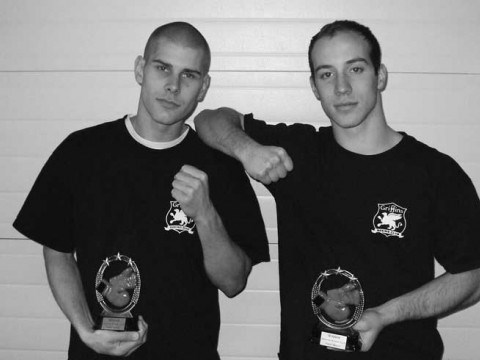 Whistler boxers Geoff Bate and James Wark were matched against tougher opponents for their second sanctioned bouts since entering the sport and both young fighters came up with wins after exciting three-round battles.

Coach Sasha Gier was happy with his students' efforts on Saturday night and the fact that both were still going strong into the third round. "Endurance is everything," said Gier.

Geoff Bate was up first against a boxer from the Capital City Boxing Club in Victoria.

"It was a total battle for three rounds, really non-stop action," said Gier. "(Bate) won all three rounds again, but there were a lot of punches thrown on both sides, taken and given, and he was against a very tough opponent."

Gier had watched the same fighter from Victoria a few weeks earlier at another bout, and Gier worked with Bate before his fight to develop a strategy.

"We knew that (his opponent) would come straight forward and try to push (Bate) back, and I remembered that he was super-aggressive but also that there was a question in that fight of his endurance. I told Bate to move around a lot, go sideways instead of stepping back and attack from all angles, and that definitely did the trick.

"There were a lot of clinches... so I told Geoff to stay away, he's a really strong guy and he's going to try to lean on you and put weight on you to exhaust your legs. Geoff used both hands to keep him off, and both boxers landed some very solid shots. It was a very good fight."

James Wark, who won his first fight by a second round Technical Knock-Out, also went three rounds against an opponent from the Griffins Boxing Club in North Vancouver, where the match took place. Wark won the first round, then was penalized a point in the second round for pushing his opponent to tie it up after two rounds. Wark stepped it up again in the third round to take the win by one point.

"It was a very busy fight, a lot of punches thrown on both sides and in the end James won by one point," said Gier. "Again, the other guy was very skilled and very fast, and James threw everything but the kitchen sink at him, which the guy took and handed back. It was a really good fight, but in the end James landed a few more punches and took advantage of every opening he got. The third round was his."

Bate will be back in action Friday, Dec. 4 in New Westminster at another Boxing B.C.-sanctioned match. Wark was also expected to compete but Gier wanted him to rest and recover from an earlier hamstring injury.

"It's only four days to prepare (after resting from the weekend), but they have no injuries from the fight and both fighters are already well conditioned," said Gier. "We're just going to go over the video from Saturday, look at technique a little, correct their styles a little bit."

Gier says his boxers are learning a lot in the ring. They might learn even more from a loss, he admitted, "But they're both really dedicated guys and they're learning a lot from wins as well. We know we're still a long way from perfection, but they're in very good condition, they're very aggressive. We just need to work on boxing styles."

The boxers are currently training five days a week with Gier, including a trip down to the Griffins gym every Friday to spar with other fighters in a sanctioned ring. However, in the next week a ring will be assembled at the newly formed Pemberton Boxing Club that is a lot closer and will serve as a home base for Gier, Wark and Bate.

Local boxing coach Kevin Murray is setting up the gym to teach young boxers and give local youth something to do. Since it was announced Gier says there has been a lot of interest in Pemberton and Mt. Currie.

Gier, who ran a kickboxing club out of Pemberton in the past, says a lot of his former students have signed up for the group, as well as others from Whistler and Pemberton. Most are training for the fitness angle but some are also interested in competing.