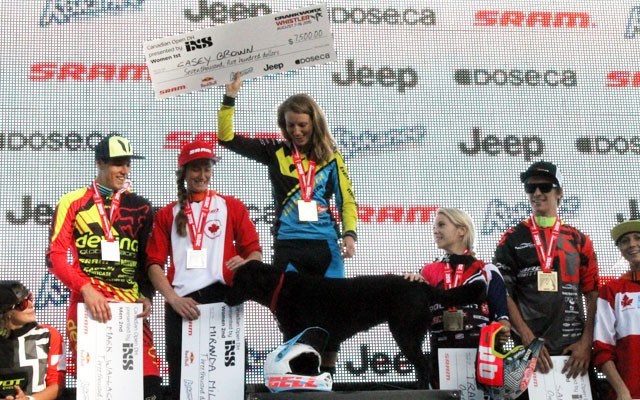 There was certainly a B.C. boost in the Crankworx-closing Canadian Open DH on Sunday.

Revelstoke's Casey Brown slammed the competition on the women's side, posting a final time of three minutes, 20.95 seconds (3:20.95) to get past Squamish's Miranda Miller by 2.38 seconds. Australian Tracey Hannah, who earned the overall downhill title later in the evening, placed third 5.46 seconds behind.

"I had a good couple practice runs this morning in the rain and the wet weather. I knew it was going to dry up and I could pull it together for the afternoon," she said. "I'm used to the dirt here. I've ridden it since such a young age. I'm loving being back in B.C."

As for the men, new Whistler resident Troy Brosnan pierced the hopes of the field by blazing to a time of 2:47.50, which was 1.89 seconds up on Duncan's Mark Wallace. New Zealand's Sam Blenkinsop rounded out the top podium.

Brosnan arrived in June and plans to stay until November, at which point he will return home to Australia to train during their summer.

The event was Brosnan's only downhill of the week, as he opted to stick to his typical training schedule.

"I was resting up and getting ready for the next World Cup," he said. "It felt good not to do much all week and to really rest up and be fresh for this race. I had an amazing run and it feels good to get first."

Each winner received $7,500 for the victory.

While Anneke Beerten had the Queen of Crankworx title in hand since Thursday's pump track event, there was a seesaw battle between France's Adrien Loron and Great Britain's Bernard Kerr for the men's title. Kerr came into the week with the advantage, though Loron took advantage of Kerr's early absence to wrestle away the lead. Kerr, however, pulled even with a third-place showing in Friday's dual slalom before taking a 10th-place in Sunday's DH to defeat Loron by just 10 points.

"It feels so awesome. I only just did it, so it's awesome," said the giddy Kerr. "(I just wanted) to ride every event and not go out."