Burch locks down Wheel Up 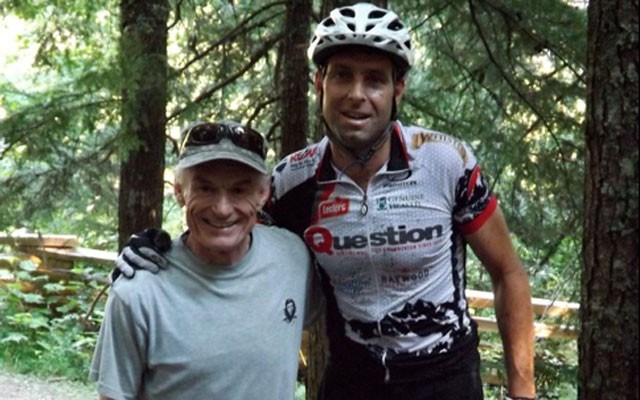 There wasn’t much left for Dave Burch to give at the Westside Wheel Up. The winner of the 20th anniversary edition of the race had some minor leg cramping as he dismounted his bike at the finish line.

He said it was a good thing the race wasn’t any longer otherwise he the cramping would have become an issue for him. The Team Whistler rider pedaled across the line ahead of second place finisher Chris Clark and Mahon Lamont in third place.

“It all came together,” said Burch as he recovered at Rainbow Park. “Sometimes it does so I’m feeling stoked on that.”

This was the second Westside win for Burch. He said he’s been doing the race since 1998.

“I just felt good on the climbs and slowly reeled Clarky in over the Beaver Pass and then I never looked behind me,” he said.

“I haven’t won a Loonie Race this year. I’ve been second four times, I’ve had 10 top five finishes so its one of those things where Chris beat me a couple times.”

Burch said he can hang up his race plate proud of strong races at the start and finish of the season.

“I won that Red Bull descent in the Nimby at the very start of the season so it’s nice to bookend the season. Now I can hang up the race number,” said Burch.

Robin O’Neill was the first woman across the finish line with Sarah Olner right behind her. This was only the second time O’Neill has participated in the race.

“It is such a nice course and it is such a good cause,” said O’Neill.

Olner said she wanted to get out of the gate a little quicker.

“I was hoping to go out a bit faster at the start but it just wasn’t there,” she said at the finish line. “It was a good course, long for sure.” Lamont, 16, said he too had a tough start.

“I felt sick this morning and I felt pretty bad at the start but once I got onto the trails I just hammered,” said the youth racer.

He said his competitors blew him up at the start and he rode smart to avoid any crashes or flat tires.

Race organizer Phil Chew said he’s already thinking ahead to next year and ways to attract more riders to the fundraiser for the B.C. Disabled Ski Team.

Just over 100 people rode in the race this year, down slightly from the record number of 124 competitors.

Chew said the course was a little tougher this year and he’s happy with that because he wants the event to be known as a challenging race.

Check back for more sports coverage on Thursday.