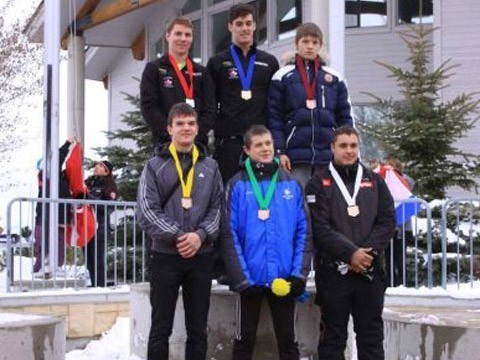 The top junior luge athletes in the world converged at Utah Olympic Park in Park City on the weekend to take part in a pair of junior World Cup events - a new level of sanctioned competition supported by the International Luge Federation.

It was a good weekend for Canada overall.

On Saturday, Canadians John Fennell and Mitchel Malyk placed first and second overall in the Youth A category, with Roman Repilov of Russia placing third.

"I was surprised when I crossed the finish line and saw first beside my name," said Fennell. "I had two very fast starts, which were my best all week. I was looking to get into the top 10 so I am very happy with this result."

On the women's side, Jenna Spencer came within 12 one-thousandths of a second of the podium. Theresa Buckley of the U.S. placed first, followed by Victoria Demchenko of Russia and Ulla Zirne of Latvia.

There were no Canadians in the junior men's event, with Germany's Chriss Eissler and Florian Berkes placing first and third, and Emanuel Reider of Italy taking the silver medal.

On the women's side, Emily Sweeney and Kate Hansen of the U.S. were first and second, followed by Kathrin Rudolph of Germany in third. The top Canadians were Jordyn Carss and Elena Corrigall in sixth and seventh, while Laura Glover placed 10th.

Calgary is hosting a Junior World Cup on Dec. 1 to Dec. 2.