Canuck bobsledder doubles up at WSC 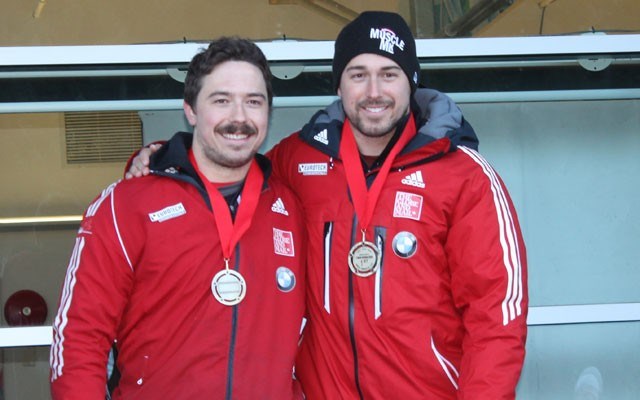 Nick Poloniato made the most of his time at the Whistler Sliding Centre.

The two-man bobsleigh pilot from Hamilton, Ont. captured both IBSF North American Cup races at the local track on Nov. 26 and 27 to extend his overall lead over Ivo de Bruin of the Netherlands to 44 points. The Dutch team was the runner-up in both races.

Poloniato, competing with different brakemen — Cameron Stones in the first race and Joey Nemet in the second — explained his familiarity with the Whistler track paid off during the two days of competition.

"I had a good two weeks of training and I was here earlier in the year, so I had a lot more runs than most of the people competing," he said. "I continued to build on that and I put together four really consistent runs and I was really happy with how I drove."

With Stones, the former defensive back with the Bishop's Gaiters football team bested de Bruin by 0.88 seconds before posting a differential of 0.78 seconds with Nemet. Australia's Heath Spence piloted his sled to bronze in the first race while American Dakarai Kongela nabbed the medal in the second.

Poloniato, who has hit the podium in all four NAC two-man races this year, said while there are some aspects of the WSC that play to his strengths, it's far from an easy run to master.

"It's definitely a challenging track. I've had my battles here. I like the speed," he said. "It went well and I'm continuing to improve and get better in a lot of areas."

Two-man isn't Poloniato's sole area of focus, as he's also piloting a four-man team that hasn't embraced quite as much success this season, posting a high finish of sixth at the three-race Calgary event.

"I don't have as much experience driving four-man, so a big thing for me this year is getting a lot of run volume driving four-man and continuing to get better at that," he said. "Both are really important, but I want to continue to build more confidence in the four-man. You have to be really good at both."

Poloniato will continue training in Whistler this week before returning to Ontario for Christmas. In the New Year, he will head to Europe and look to familiarize himself with some tracks

"I've just got to continue to be disciplined with the program. I've got really great coaches I really work well with, Lyndon (Rush) and Graham (Richardson)," he said. "(I'll) continue to stay strong physically and I think it'll all keep snowballing and keep going downhill."

Competing with Cynthia Appiah in both contests, de Bruin knocked off fellow Canadian Alysia Rissling by 0.26 seconds in the first before falling to fourth, 0.72 seconds off of American Brittany Reinbolt's winning pace, in the second. Canadian Julia Corrente took the silver in the second race while South Korea's Seonhye Lee was the bronze medallist in both events.

The slip off the podium was the first for de Bruin, who had won all three races to this point in the season.

"I was just taking it push by push, corner by corner, and it just came out good," she laughed. "It was a pretty smooth run yesterday.

"We had a really good push and that definitely helped it."

The de Bruin sled posted the best start each time out but couldn't make good on the second day, losing time midway through both runs.

Overall, though, de Bruin is satisfied with the progress she has made this year already as she looks to get back in Bobsleigh Canada Skeleton's good graces after being dropped from the team in the summer of 2014 for missing a start standard by 0.01 seconds.

"It's looking pretty good. We're looking at it as a development year, learning all the tracks a lot more and getting a lot more runs in and so far that's been working for us," she said.

De Bruin acknowledged she, too, had gone to war with Whistler's track, but has spent time learning its intricacies and has come to appreciate it.

"I definitely like Whistler. I would say it's our second-best track. It's a lot of fun," she said. "I wouldn't say it's one of my strengths, but it's one we've definitely been working on a lot."

Like Poloniato, de Bruin will be spending another week in Whistler to train and prepare to maintain the strong start to the season. She currently holds a 42-point advantage over Reinbolt for the overall title.