Canucks coming to town for camp 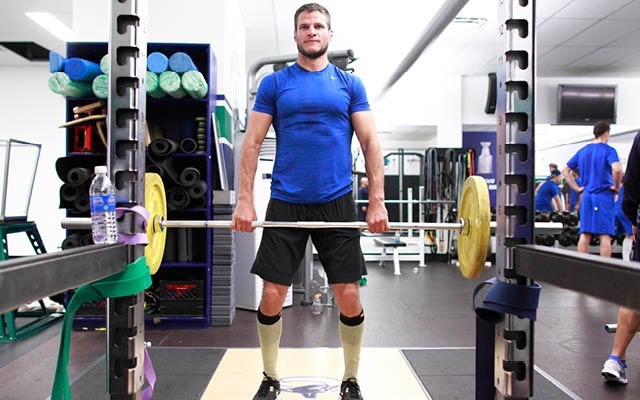 boys in blue are back Kevin Bieksa and the rest of the Vancouver Canucks will be in Whistler for training camp once again this year, hitting the ice at Meadow Park Sports Centre Sept. 19 to 22. photo by jeff vinnick / courtesy of vancouver canucks

Vancouver Canucks fans will get their first chance to see the team's veterans, newcomers and prospects on ice together in Whistler this weekend, when the NHL team opens its training camp in the resort.

The Canucks will take over the rink at Meadow Park Sports Centre for four days, beginning on Friday, Sept. 19, before getting into their schedule of preseason games.

On Sunday, the players will be divided up for an intra-squad scrimmage, with puck drop scheduled for 10:30 a.m.

All on-ice sessions will be open to the general public at no cost, but space will be limited and spectators will be admitted on a first-come, first-serve basis. Doors will open at 8:30 a.m. each day.

Parking at Meadow Park Sports Centre is also expected to be limited, so local residents are encouraged to walk, bike or take transit to the rink.

Several Canucks prospects were in action this past week during the Canucks YoungStars Tournament in Penticton, where they took on other up-and-comers from the Calgary Flames, Edmonton Oilers and Winnipeg Jets. The Canucks' first preseason games take place Tuesday, Sept. 23, with split-squad contests against the San Jose Sharks in both teams' cities.

The Canucks traditionally move their training camp around to different B.C. communities each preseason, and Whistler has acted as host five of the past 12 years. Several other NHL teams have paid a visit to Whistler in recent memory, too, including the St. Louis Blues in 2013.

Some of the 2014 Phat Wednesday series champions were among the leaders again Sunday, Sept. 14, when the Phat Weekend DH Triple Crown race hit the Whistler Mountain Bike Park.

Several dozen riders competed in the three-stage downhill, with one course running down No Joke, the next following Schleyer and Lower Whistler Downhill, and the final leg taking place on Dirt Merchant and Rutabega.

In the master men's race, Richard Bedford took the victory by a hair over Shane Gayton, as the two riders were separated by less than one second after three legs. Adam Dagg finished in third place.

Phat racing will wrap up for the year on Sept. 27 with the Phat Weekend Enduro. See bike.whistlerblackcomb.com for full results, details and registration.

This weekend marks the arrival of cyclocross racing in the resort, with two-days of competition planned for the Creekside area on Saturday and Sunday, Sept. 20 and 21.

For the uninitiated, cyclocross is a unique style of mountain bike racing that is part cross-country and part criterium, and generally requiring riders to dismount and carry their bikes in order to navigate past on-course obstacles.

Prize money will be up for grabs both days in the elite categories, for which a UCI racing license is required. All other men's, women's and junior riders are eligible to participate with a Cycling BC citizen license.

Check-in begins at Dusty's at 8 a.m. each day, with the races getting underway starting at 10:15 a.m.

The course will begin and end at Whistler Creekside's Medals Plaza, using parts of the Franz's Trail shopping area walking paths and the lower slopes of Whistler Mountain. Sunday will use the same course as Saturday's races, but in the reverse direction.

The Canadian Sport Institute-Pacific will host its next Podium Search event on Saturday, Sept. 20.

Podium Search is a one-day athlete identification camp where participants are tested to determine their capability for sport performance at the elite level. Athletes are put through physiological and sport-specific tests to see how they compare to national team standards.