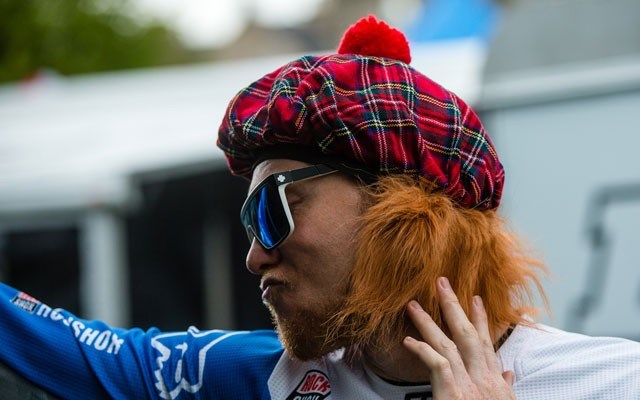 Enduro rider Josh Carlson hams it up wearing a tam o’ shanter during a moment at the Cannondale Alpine Bikes World Enduro in Peebles, Scotland over the weekend. Carlson, an Australian who trains in Whistler, placed ninth. Photo by Matt Wragg/Enduro World Series

This year's contingent of Enduro World Series riders hasn't seen the best of Josh Carlson yet.

The 29-year-old Wollongong, Australia product, who regularly trains in Whistler, has admittedly raced on the conservative side after returning healthy from two injury-ravaged seasons. The approach didn't hold Carlson down at the third event of the EWS season in Peebles, Scotland on May 30 and 31, as he pedalled to a ninth-place finish and now sits 11th in the overall standings.

"It's been a rough couple years sorting my program out and getting back to where I'm happy with. I'm learning to ride at a pace that's comfortable and sustainable and still competitive," he said. "As the two weeks went on, to come away with a ninth and finally crack back into the top 10, it felt really good.

"Every stage that we raced in Scotland and in Ireland (a week before) were really technical and had so many aspects to it that you had to put it all together."

In Scotland, Carlson got off to a relatively slow start with 15th and 17th place showings in the opening two stages before finishing fifth once and sixth twice in three of the final four sections.

Overall, he was 30.36 seconds back of winner and series leader Justin Leov. Whistler resident Yoann Barelli was 11th in the race, 52.97 seconds back while Jesse Melamed was 24th, Jordan Hoddor was 96th and Davis English 126th. The field boasted 510 finishers.

Carlson has made steady progress throughout a strong year thus far, placing 18th in the season debut at Crankworx Rotorua in New Zealand and improving to 14th at the Chain Reaction Cycles Emerald Enduro before scooting up another five spots.

In the 2013 season, Carlson suffered a "humongous crash" at the French race that made a major impact on the left-hand side of his body. He broke his elbow in four places, dislocated several bones in his shoulder and badly injured his leg, among others ailments. After coming back from that, he separated his shoulder at the season-opening race in Chile. Though he posted some strong results throughout the season, he was shut out of the top 10.

Carlson said he began feeling "100 per cent" over the winter — a season that included plenty of training. He isn't feeling any lingering effects of his injuries.

Carlson plans to spend a fair amount of time in Whistler Mountain Bike Park in the coming weeks, especially with the next race not slated until mid-July in France before races on this continent after that.

"I'll definitely aim to build up for Colorado and especially Whistler," he said. "I'm looking to ramp it up, have a great solid ride in Whistler."

Explaining he plans to take a more aggressive approach when the season starts up again, Carlson plans to take more calculated risks in order to improve his times after taking the more obvious lines while getting other factors on point thus far.

"At the moment, I'm focusing on the sure things, focusing on the pedalling and focusing on maintaining my momentum and being smooth and fast," he said. "It's just a matter of being really sharp and riding each stage as close to the edge as you can, taking a few risks and not quite holding back on the technical sections by actually being aggressive and attacking the track. It's those little things that add up."