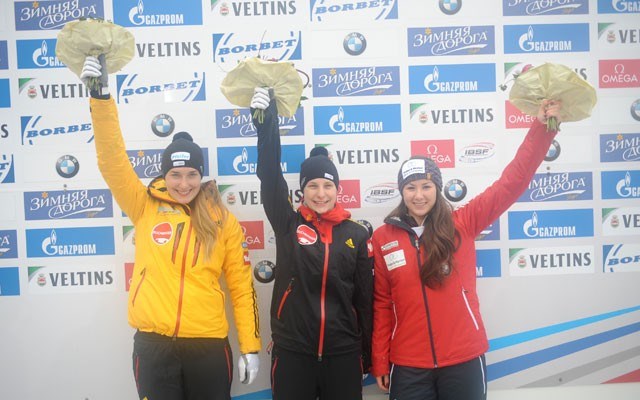 Winterberg isn't much like her home track in Whistler.

But Jane Channell seems to find a way at the German track, even if she can't fully explain what exactly it is about her style that seems to sync pretty ideally with it. The 27-year-old North Vancouver product took her first ever IBSF World Cup medal at the course on Dec. 4. This is her second year on the world's top skeleton circuit.

"I was so excited. I'm just so happy,"Channell said in a Dec. 8 interview from Königssee, where she is training for a race this Friday, Dec. 11.

Channell posted a two-run time of one minute, 58.75 seconds (1:58.75) to earn a spot on the World Cup podium for the first time. Two Germans finished ahead of her, as Tina Hermann won with a time of 1:57.87 while Jacqueline Loelling placed second, 0.40 seconds back. Channell was fifth after the first run, but posted the fourth-best second attempt as the two sliders ahead of her struggled and slipped back.

Channell acknowledged she was trying to keep her expectations from getting too high in advance of the race, as the warm conditions in Winterberg posed stiff opposition for all racers.

"All during training, it was super warm and rainy. The majority of the track is covered, but with the humidity, it makes the track frost up quick. On race day, it happened to be so foggy, the cameras couldn't even see the start of where the starting block was," she recalled. "Knowing that and everything, the track conditions were definitely deteriorating the farther down the start we got. We had to battle that as being a main, key factor of the track."

Additionally, she opted to use runners and equipment that wouldn't mesh perfectly with the frosty conditions, but would ideally provide some advantages elsewhere. The hunch, certainly, paid off.

Though the visibility was poor, Channell explained it's not a huge concern as the athletes' knowledge of the track and modern visor equipment minimize the risk.

"You know the track. You've slid it through training, and we were there last year and everything. Visibility isn't an issue," she said, adding the tinted visors block out both sunny glare and hazy fog.

The milestone may not have been quite as special last week, as Channell didn't miss the podium by much at the World Championships in Winterberg last season. She can't entirely explain her success there, but appreciates it.

"I wish I could pinpoint it. I don't know what it is about this track. It's a glider's track, so in regular English, it means the less you do, the better off you are," she said. "Each track has its own rhythm to it and the rhythm to this track is one I just click with, I guess."

The Winterberg success may be even a little harder to explain for Channell, considering there aren't many features it boasts that are common to her home track here in Whistler.

"If you can picture the exact opposite, pretty much, that is exactly it. Winterberg is one of the fastest tracks out there aside from Whistler, but you don't really hit that top speed until you're in the very bottom corners," she said. "Whistler is a lot more in your face. You can get away with not-perfect entrances. As long as you perform the steers correctly in the corner, you can fix it.

"In Winterberg, it's all about the angles and the more precise details is more where time is gained or lost."

Looking ahead to this week's race, Channell said she doesn't have quite as much run volume in Königssee as compared to Winterberg, so getting in tune with the track's rhythm will take a little more time.

"Each corner is shaped differently each year. It's just being able to click with the track and trying to figure out those minor details that we're going to pull off, if I can do that," she said.

Fellow Canadian Elisabeth Vathje placed ninth in the race. On the men's side, Dave Greszczyszyn placed 13th and Barrett Martineau was 17th.