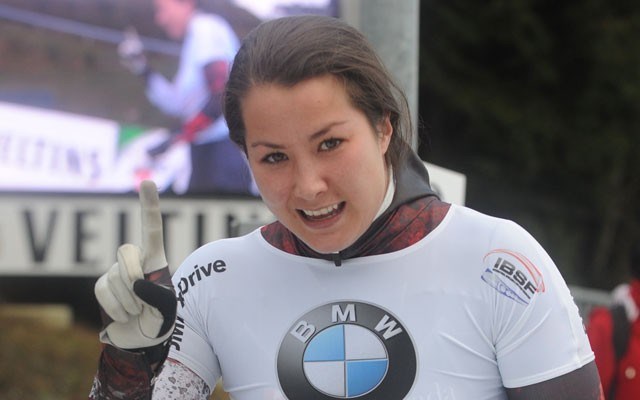 Jane Channell's first full season on the IBSF World Cup circuit didn't get off to a particularly encouraging start.

The 27-year-old out of North Vancouver, who trains at the Whistler Sliding Centre, suffered a hamstring injury while training in the offseason. She felt its effects well into the season.

However, she missed the top 10 only once during World Cup competition this year — placing 11th in the season's final race in Konigssee, Germany on Feb. 26 — and took home her first two medals, a silver at Park City, Utah and a bronze in Winterberg, Germany. That consistency helped Channell earn the overall bronze for the 2015-16 season.

"I'm so happy the season ended and played out as it did," she said. "I learned a lot this year, with my sled and my equipment... I'm really looking forward to coming back last year."

As well, grasping the intricacies of the tour's tracks should help her out in the seasons to come.

Though she narrowly missed the podium in January's races in Whistler, taking a fourth-place finish, Channell appreciated her first major race on her home run.

"Hitting the podiums, both in Winterberg and Park City were great, but being able to compete at home in Whistler would probably be the highlight of my season, even though it wasn't my best result," she said. "Just to be able to be there and to showcase how great of a track Whistler is is, I think, one of the coolest things this year."

Heading into the offseason, Channell will look to regain the form she felt last summer before tearing her hamstring and being forced to sit out for roughly six weeks as it healed.

"Right before that happened, I was at a training camp where I was the fastest I've ever been, I was the strongest I've ever been, so it was really disappointing when that happened," she said. "It definitely did lag into the season and unfortunately, with skeleton because of the (lack of) funding, we weren't able to have a therapist on tour. It was difficult to deal with it on my own, pretty much."

A major component of the summer will be spent working on her explosiveness, as she'll be looking to be quicker out of the gates, but Channell added that there's a lot she can do with her mind as well.

"I need to still work on my starts and I need to stay healthy throughout the summer so I'm able to come into the next season ready to go," she said. "(I need to) just go over the tracks, visualize myself going down the tracks over and over again, just a lot of inspiration, I guess."

Though the schedule has not officially been announced for 2016-17, the rumblings are that the venues from the recently passed Sochi Olympics and the upcoming PyeongChang Olympics will be on the menu next year. Channell has only been to the Russian track once and the South Korean track will be new for all. Regardless of whether a venue suits her style or not, Channell stressed she'll need to do her best to put up results.

"I'm confident in my ability and I'll do my best wherever the races take us," she said.

Other Canadian women had reason to celebrate in Konigssee, as the bobsleigh duo of Kaillie Humphries and Melissa Lotholz won the Crystal Globe — Humphries' third and Lotholz's first. The team hit nine consecutive podiums, including winning here in Whistler in record fashion.

"To win the overall title is a great feeling especially knowing we were never off the podium all year regardless of our finish position," Humphries said in a release. "Melissa progressed a lot this year and really stepped it up. We are going in the right direction with what we want to achieve and that is great."