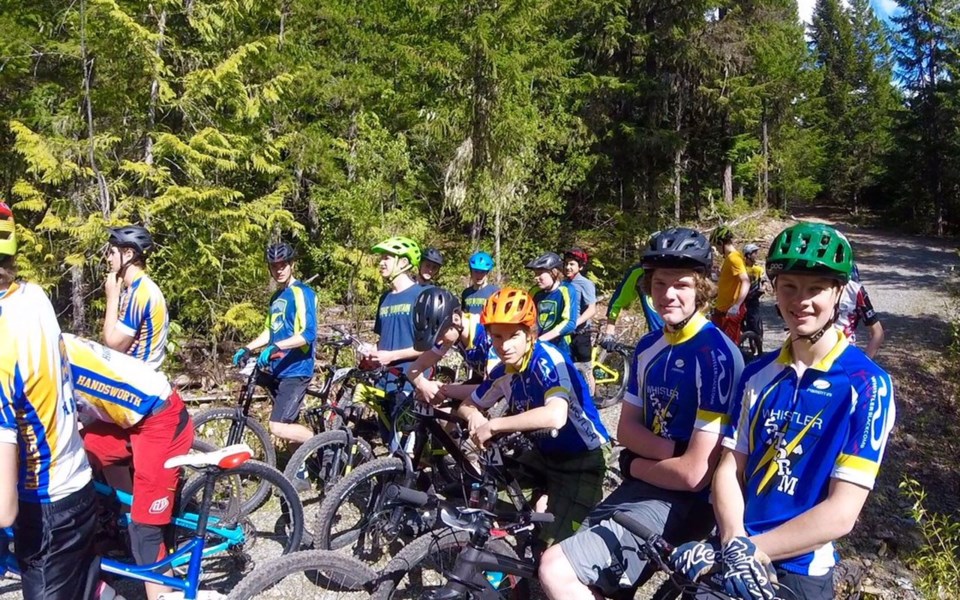 The Sea to Sky corridor is the home of mountain biking in British Columbia—and the future certainly looks bright.

She said the riders had to employ a different strategy than they do on their home trails, but they were able to make it work by cornering quickly as opposed to tackling rocky, rooty technical terrain.

Whistler scored second overall despite a heartbreaking double flat from Jaden Tucker in the cross-country race, where he was a podium contender in the Grade 9 division, sitting in second place at the top of the climb. Tucker rebounded to pull off a sixth-place finish in the enduro.

Clements was also impressed with Kenzo Okazaki, who made significant improvements over the course of the season in order to peak at the right time, taking a win in the Grade 8 boys' enduro and second in the cross-country. He also earned the King of the Mountain title while teammate Camie Rushbrook took the Queen of the Mountain award.

"We knew he was strong," Clements said. "But it was a little bit of a surprise for him to do so well."

Grade 9 students Marlie Molinaro and Maya Mikkelsen were fifth and seventh, respectively, on the women's side, while Kaila Lafreniere won the Grade 8 women's event.

In the enduro, Kearns, Fogolin and Jelenic were in the top 10, taking fourth, sixth and 10th, in order. Mikkelsen was fifth and Molinaro was seventh in the Grade 9 women's race, while Lafreniere won the Grade 8 competition.

Clements noted one Whistler rider, Caden Lancaster, nearly had to miss the event when his bike suffered a freak mechanical that couldn't be fixed before the meet. However, she said Bike Co. offered a steeply discounted rental and the Whistler Off-Road Cycling Association picked up the remaining tab to allow Lancaster to compete.

Pemberton Secondary coach Nicole Jean, meanwhile, said the team had some trouble in the enduro since they weren't able to pre-ride the course. However, they'd already picked up a fair portion of points in the cross-country event to pad their totals.

"The kids gave it their all and they were great," she said.

In the Grade 11 and 12 cross-country race, Joe Davies won the men's event while Avery Hargitt was fifth, and on the women's side, Ella MacDonald, Alisa Feuz and Fiona Davies were third, fifth and seventh, respectively.

At the Grade 10 level, Arriya Kuiper was third in the women's race while Aidan McIvor took ninth in the men's race.

In the Grade 9 race, Christopher Beaton hit the top 10, taking eighth in the men's competition, while Leah Pegram was fifth in the Grade 8 women's event.

In the enduro, meanwhile, Davies was seventh in the Grade 11 and 12 men's event while MacDonald, Feuz and Davies were second, sixth and eighth, respectively, for the women.

In the Grade 10 event, Sean Turin took a second on the men's side, while Kuiper was fifth on the women's side. Beaton took eighth in the Grade 9 men's race while Pegram was sixth among the Grade 8 women.

While Pemberton sent a 19-rider contingent, it was missing World Cup junior rider Lucas Cruz and a couple other riders racing the Nimby Fifty.

Jean noted the team had 32 riders this year, over 10 per cent of the school, and it claimed the senior boys' and combined junior and senior girls' banners in the North Shore Secondary Sports League this season.

Jean added the Whistler Cycling Club provided a boost by providing a bike for one rider, Shaquari King, who had never participated in the sport before this season.

"He vastly improved. He's never mountain biked before in his life and never had an opportunity to get involved in the sport," she said. "He had a great time."