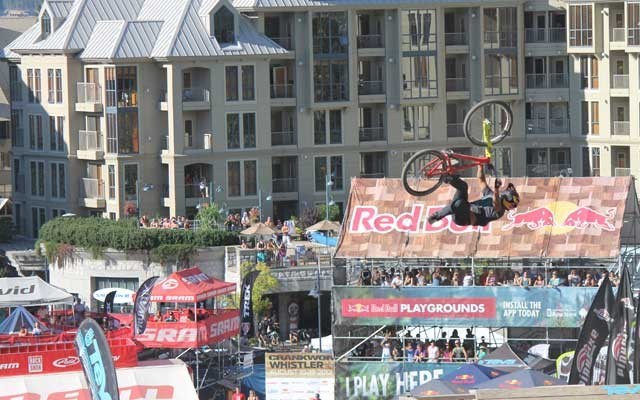 For years, Whistler has been at the forefront of mountain biking.

The Whistler Mountain Bike Park invented a whole new kind of riding that has gone global, influencing bike designs and riding styles. And while North Shore trailbuilders can take the credit for building imaginative wooden stunts in the forest (although A River Runs Through It is also influential), it was Whistler that merged North Shore-style riding with big mountain riding and BMX to create the sport of mountain bike slopestyle, the most exciting event going these days.

Brandon Semenuk, the most progressive rider in the sport with wins at every major slopestyle event in the world, is also a Whistler product.

Crankworx Whistler innovations over the years also include one of the longest downhill competitions in the world (Garbanzo DH), the first big money Pump Track competition and one of the first new era dual slalom competitions. Last year's inaugural tailwhip competition was also huge, drawing a huge crowd of mountain bike fans.

And while innovation is part of the festival, Crankworx Whistler also pays homage to some of the more niche elements of the sport, providing a venue for the Trialsworx trials competition and bringing back the Fat Tire Criterium.

This year there's plenty of new things taking place that will generate even more excitement, including a sold-out Enduro World Series event and the Canada Cup finals for cross-country and downhill (with the downhill finals doubling as the Canadian Open DH).

All told, there are 14 events on the schedule this year, if you include the annual Canadian Cheese Rolling Championships. Most of the events are open to the general public, although there are a few invite-only competitions on the list.

Fat Tire Crit — Whistler Olympic Plaza gets converted into a racecourse, with cyclists powering through laps of an 800-metre course. The men race for 20 minutes plus five laps and the women 15-plus-three, with riders getting pulled off course every few laps until only a few remain to challenge in the final sprint. There are also primes available at different times, creating a race-within-a-race.

Dual Speed and Style — A few years ago saw the return of the dual slalom discipline to mountain biking with courses that included jumps and berms as well as gated slalom sections.

As always, Crankworx organizers took things a bit further and built courses that are bigger and burlier than anything else out there, and then last year organizers decided to add another twist to the event by adding a few bigger jumps and giving riders scores for adding tricks to their runs. It's a unique format that's been replicated a few times since, where being the fastest doesn't necessarily mean winning.

The event is invite only with 32 riders in the qualifier and the top eight advancing to the finals.

This year's event will have four features and one point will be available for each feature that will be worth a pre-determined amount of time. Athletes will still be competing for the fastest trip down the course, but judges will award points — and time deductions — to the athlete they thought handled each particular feature the best.

SRAM Canadian Open Enduro presented by Specialized — After a foray into the enduro discipline last year, organizers are going all out and hosting an event that is both the North American championship as well as one of seven events in the Enduro World Series.

There were two rounds of open registration for the race, both of them selling out quickly.

The course will not be announced until Aug. 9, but there should be at least five timed stages around Whistler if the first three events of the world series are any indication. The prize purse is $25,000.

The fourth race in the world series is on July 27-28 at the Colorado Freeride Festival. Whistler is the fifth race, and will be followed by events in France and Italy in August and October.

Garbanzo DH — This event is wide open to the public, and features a 3,400 vertical foot (1,100 metre) descent from the top of the Garbanzo Zone to the finish line in Whistler Village.

There is $8,000 in prize money up for grabs in the pro categories. For more information and registration visit www.crankworx.com.

GoPro Dirt Diaries — The night's entertainment is the now annual GoPro Dirt Diaries competition, where participants (one athlete and a crew, if they choose) have seven weeks to create a four-to-six minute mountain bike video. The films will be screened at Whistler Olympic Park with an expert panel of judges awarding $5,000 to the top film, plus $3,000 for second and $2,000 for third.

Time is TBA, but the Garbanzo pro categories aren't complete until 7 p.m.

Fox Air DH — The Fox Air Downhill is one of the longest-running events on the Crankworx schedule, with participants racing down A-Line's non-stop collection of berms, tables, step-ups and step-downs at top speeds. This event is open to the general public and sells out all 400 spots. The prize purse in $8,000.

Canadian Open XC — This is a new event for Crankworx Whistler, representing the final Canada Cup race of the 2013 season. The race takes place in Lost Lake Park with racers doing four-to-six laps of the course, starting and finishing at Spruce Grove Park. One Whistler rider, junior Felix Burke, is the running for the overall Canada Cup title.

The slides will be presented at Whistler Olympic Plaza. Admission is free for grass seating, but there will be some paid seating up front.

Teva Best Trick Showdown — The format is a little different this year with a head-to-head, elimination event until only a few riders are remaining to contend for the biggest cheque of the $10,000 prize purse. The show runs from 4 p.m. to 6 p.m. at the base of Whistler Mountain.

Ultimate Pump Track Challenge presented by RockShox — This event was brought to Whistler Olympic Plaza last year from its previous home on the mountain, drawing a huge crowd. Organizers are sticking with that formula, building another big course for riders to face off in the usual elimination format. The finals run from 8 p.m. to 9 p.m. with a prize purse of $8,500.

Giant Dual Slalom — Giant Bicycles sponsors this giant dual slalom race through the Boneyard. The course always lives up to its name, with huge airs, big corners, rhythm sections and other features to challenge some of the top 4X riders in the world.

Trialsworx/Kidsworx — Mountain bike trials riding is not as fringe as it used to be, thanks to ambassadors like Ryan Leech, the incredible videos of Danny MacAskill and Mill Bay's John Webster holding his own against the best riders in the world at the World Cup level. Trialsworx, which includes a Kidsworx competition for kids, draws trials riders from far and wide to Whistler to take on a series of routes around the village.

Riders have a set amount of time to complete each course, and get penalized with "dabs" every time they put a foot on the ground. The lowest score wins, and riders get two judged attempts for each section.

Trialsworx runs through the day, starting just after 10 a.m. and finishing at 2 p.m. Stages are at the Town Plaza gazebo, in Mountain Square opposite the movie theatre and near the covered bridge over Fitzsimmons Creek.

Canadian Cheese Rolling Championships — This now annual event has people run down a steep slope on Blackcomb in pursuit of a wheel of cheese, with the winner of the final round, male and female, each get two season passes to Whistler Blackcomb and a very expensive wheel of cheese.

There are a wide range of side events for all ages, including a kid's uphill run, games, cheese tastings and more, as well as a new costume contest where the winner can walk away with ah $500 gift certificate for IGA Marketplace.

The festival runs from noon to 4 p.m. at Base II on Blackcomb Mountain.

Red Bull Joyride — This event is the crown jewel of Crankworx, the longest-running mountain bike slopestyle in the world, as well as the event that riders most want to win — for the prestige as much as the $25,000 first prize cheque and $50,000 total in prizing. Crowds over 20,000 gather in Whistler Village to watch the event, and hundreds of thousands more tune in over the live feed.

The show itself runs from 5 p.m. to 7 p.m. with a list of invited riders facing off in a two-run qualifier, with the top riders earning a chance for a third run. Only the top score out of three runs will count.

Get there early to get a good viewing spot, and there will be screens positioned around the course so spectators can see the entire runs.

Canadian Open DH — Some 400 riders are expected to take part in this year's Canadian Open DH race, which doubles as the Canada Cup Finals. A few younger riders from Sea to Sky are in the running for national titles, while the pro riders will be looking for a share of the $30,000 prize purse.

Amateur categories run through the day, with the pro divisions racing from 3 p.m. to 5 p.m.

The best place to watch, as always, is the now legendary Heckler's Rock, which is probably the loudest and rowdiest spectator venue in the mountain-bike world. It's a high-speed area where riders are prone to crashing, and features a steep ride-out. It's also under the Fitzsimmons Chair.