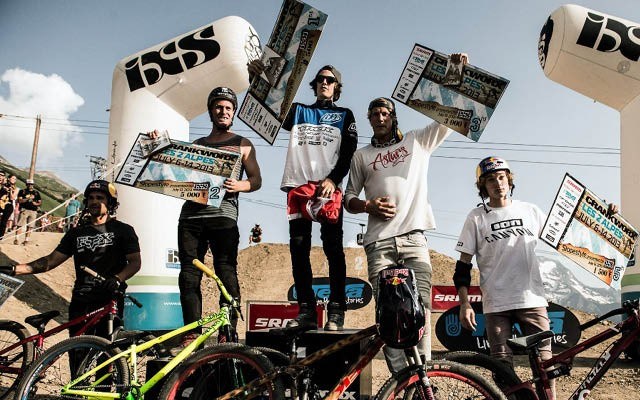 If you just can't wait another few weeks to get your Crankworx fix here in Whistler, you're in luck, because Crankworx Les 2 Alpes is on this weekend, and fans can catch much of the action online.

Whistler's own Brandon Semenuk goes into the Les 2 Alpes Slopestyle on Saturday, July 5, as the two-time defending champion, having edged Sam Pilgrim and Martin Söderström to retain his title in 2013.

This year's contest is also a diamond-level stop on the Freeride Mountain Bike World Tour, the first one of the season, featuring a course designed by Yannick Granieri. A live webcast of the finals will become available at 7:30 a.m. PDT at www.crankworx.com.

Some other events to keep an eye on at Les 2 Alpes are the GT Dual Speed and Style, as well as the Pump Track Challenge presented by Rock Shox on July 4.

The weekend closes with the Polygon Air DH iXS European Cup race on July 6, with 2013 winners Gee and Rachel Atherton headlining the men's and women's fields.

Visit the Crankworx site for a full streaming schedule, or to view more details about Crankworx Whistler, running Aug. 8 to 17.

KIDZ CRUSH IT IN PHAT RACE

The big kids made way for the littler ones last week as Wednesday, June 25, was reserved for the first-ever Phat Kidz race in the Whistler Mountain Bike Park.

More than two dozen riders aged 17 and under turned out for the evening race, which put competitors to the test on a course featuring Crabapple and Del Bocca Vista.

Aaron Gungl posted the fastest time of the night, stopping the clock at two minutes, 30.94 seconds. The result also put him first in the 13-and-up age group, which saw Kolt Hoyle (2:33.62) in second place and Stephanie Denroche in third.

Ethan Shandro had the overall runner-up time at 2:31.73, which placed him atop the 11-12 age category. Finn Finestone rode into second place with a time of 2:45.06. while third place belonged to Eric Milley.

Jackson Goldstone put together an impressive ride to win the 9-10 age group, finishing the course in 2:45.13. Jacob Coleman and Cosmo Wilson rounded out the category's podium.

Finally, the youngest age group saw the largest numbers for the race, and it was Zowan Sayers who claimed the 7-8 age title at 3:33.83. Griffin Wood took second place, three seconds behind, while Dylan Marino rode to third place.

The next Phat Kidz race is scheduled for July 23, using B-Line and Ho Chi Min. Before then is the Lil' Shredders day on July 6, a free drop-in skills clinic with Whistler Mountain Bike Guides, open to riders aged six to 12. See bike.whistlerblackcomb.com for more details.

The Phat Wednesday series resumed after press time on July 2. Check back next week for results.

Registration for the 17th annual Squamish Triathlon remains open until midnight on Friday this week ahead of race day on Sunday, July 6.

The event gets underway in Alice Lake at 10 a.m. Visit www.squamishtriathlon.org for registration and event info.