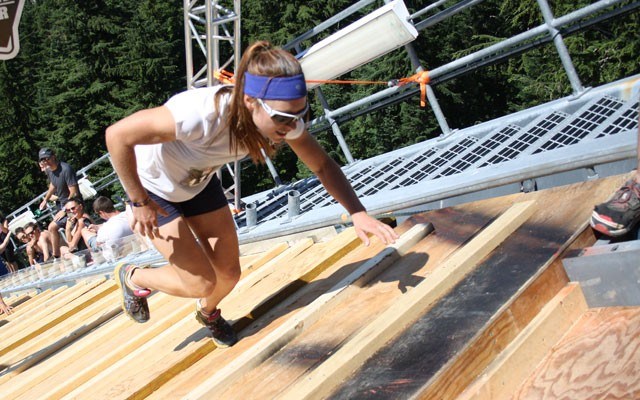 Zoe Dawson approaches the finish line of the women's final at the Red Bull 400 at Whistler Olympic Park on Sunday, July 19. Photo by Dan Falloon

The Red Bull 400 took a lot out of competitors who had completed their first runs.

Brandon Crichton and Zoe Dawson made short work of the course not just once, but twice.

Crichton, from North Vancouver, and Dawson, from Squamish, captured the respective solo finals at the first-ever Red Bull 400 held in Canada. The race forced runners up the ski jumps at Whistler Olympic Park.

By virtue of their victories, both runners also qualified for the Red Bull 400 global finals at a top-secret location in Europe unknown to even race director Geoff Langford after the race.

Crichton, a former professional cyclist, had competed in his first running race the weekend prior to the steep run.

After qualifying with a blistering time of four minutes and seven seconds (4:07), he shaved another 14 seconds off that time in a neck-and-neck final with Shaun Stephens-Whale, who was just two seconds back. Michael Simpson placed third with a time of 4:01.

"There is no how. I have no idea," Crichton said when asked how he improved his time from the first heat to the final. "I'm an endurance athlete on the road cycling side of thing. It's totally different from something like this. It's so hard to train for something like this.

"I've been spending countless mornings and evenings on the Grouse Grind, trying to pick the streets in North Vancouver that are the steepest and doing wind sprints."

While Crichton has had the race on his mind for the past two months, women's winner Dawson took a decidedly different approach. The Squamish resident by way of Australia snagged one of the final registration slots after opting to compete last minute.

Dawson also improved her time in the final, trimming down to 5:08 after qualifying with a 5:26. Chantelle Groenewoud and Tiffany Phillips each crossed the line about five seconds after Dawson.

"It's kind of nice that in a way, you knew what to expect, but you also knew you were going to hurt a lot," she said. "I pretty much did the same thing and it kind of worked. Keep a steady pace. And I had a friend there at the side telling me to pace myself and not go too nuts. It's tempting, the last one of the day, to push it."

In the relay, Whistler Core won in a blazing time of 3:15.

Organizers, meanwhile, were pleased with how the race went off. Langford said all 400 spots were filled and when the race is held next year, they will look to accommodate more athletes who are interested in taking part.