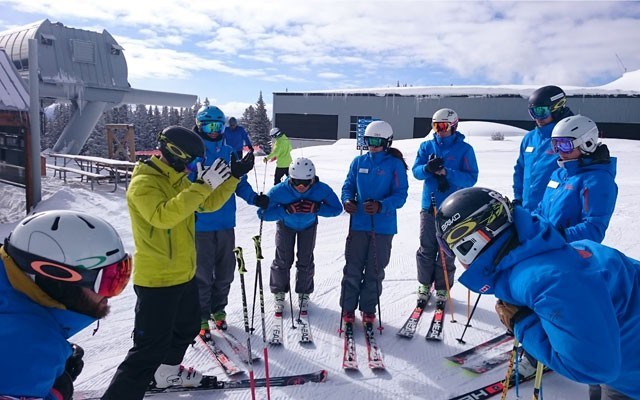 Whistler boasted a successful return to the synchronized skiing circuit.

The Whistler Demo Team hit the podium in its first trip to the Aspen World Synchro Championships, which ran March 31 to April 2.

The team particularly excelled at the bumps, taking the top score in that category, and also took a third-place showing in the race to sit in first place after the first day of competition.

However, those two disciplines made up only 10 and 20 per cent of the score, respectively, with the synchro portion making up the remaining 70 per cent of the tally. The Whistler team finished fifth there to take third overall. In a tightly wound field, Whistler scored a 346.25 four-run total while the winning Telluride Ghostriders nudged ahead with a 361.00 score.

Team manager Guy Dale was proud of how the team performed, especially given it was their debut in the event. They needed to make some adjustments upon arriving, especially in their third synchro pass, as the pitches in Aspen weren't as steep as they had skied here at home.

"We actually had to make a couple of last-minute changes because we realized that the pitches that we'd practiced on here in Whistler were slightly different," he said. "We had to check with the judges and make sure that was OK. It was all good and the changes were made. You have to hand a playbook into the judges so they can give you a difficulty score on your passes."

Dale said the team learned about the intricacies of the scoring at the coaches' meeting, but couldn't make all the tweaks so late in the game. With the exact pitches and dimensions nailed down, they'll know exactly how to get ready for 2017.

"One of the things that we learned is if you stop right up and use the whole terrain available to you — you stop right up against the fence — you get a maximum score. We were stopping maybe 15 feet from the end flag so you get a 0.25(-point) deduction each time," he said. "We can't really change too much because it'll just ruin everything, so let's just give it a go and see what happens."

Dale was particularly impressed with the second pass of the contest, which was a mandatory classic school pass revealed by judges at the competition, as the collection of Whistler skiers completed it as smoothly as the veterans.

"We were right up there with all the other teams," he said. "We were super happy about that, actually, because (it was) our first time doing the mandatory pass, and doing it as well as the other guy was awesome because the other teams have been together for three or four years and they're training all the time. We only managed to get two-and-a-half days of full-time training."

After some up-and-down results in its first three passes, the Whistler team impressed in its final attempt. In the fourth pass, each team repeats one of its previous arrangements. Whistler notched its best score of the contest to tie for second on that particular pass and launch them from fifth overall to third.

"That last pass was our godsend. It was our saviour to finish on the podium," he said.

One trait going in Whistler's favour was its high level of skiing, but they'll need to work on skiing well together if they hope to rise in the rankings.

"We were skiing faster and probably more high performance than any of the other teams, so when we looked at the scoresheet, our performance mark was the highest," he said. "But because we're new at this, the synchronicity, because we were skiing so fast, was slightly off, so our synchro mark was middle of the pack.

"Next year, what we're going to have to really practice is trying to find a good blend between how fast we can push it and at what point does it stop becoming neat?"