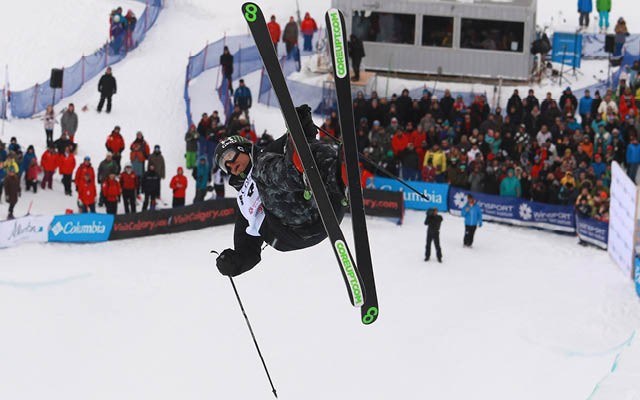 Justin Dorey is feeling back to his old self, and it sure looked that way in Calgary last week.

The Whistler-based member of the national halfpipe ski team led a Canadian podium sweep with a victory at the Jan. 3 World Cup contest at Canada Olympic Park, sharing the podium with teammates Noah Bowman and Matt Margetts.

Dorey has battled injuries for parts of the last two seasons and spent several months in 2013 recovering from shoulder surgery. But the 25-year-old has come into the Olympic year at full health and has started to reclaim his place as a favourite for a medal in Sochi next month.

"Winning today allows me to change my priorities for the rest of the season," Dorey said through a press release. "Now, it's all about revving it up for my Sochi run... and winning this event, standing beside my best friends, is the best feeling ever."

Dorey was coming off a fourth-place finish at the U.S. Grand Prix World Cup event just before Christmas and kept the momentum going into last week's contest. The Vernon native posted a score of 83.20 on his first run and then topped that mark on his second trip through the pipe, taking a mark of 87.20 from judges.

"It's been a long, challenging recovery from my shoulder surgery last year but I finally feel like I'm skiing like myself again," Dorey said in an email to Pique. "I feel like I'm back to where I was at before I went in for surgery, I'm picking up where I left off.

"That being said, all my competition has had nearly a year to progress their skiing while I've been trying to get back to where I was last year, so I still have my work cut out for me to get to the front of the pack."

Bowman (84.40) and Margetts (82.60) skied their way onto the podium with impressive second runs of their own.

Dorey now has his place at the Sochi Games confirmed, joining teammates Mike Riddle and Rosalind Groenewoud. Riddle did not compete in Calgary as he rested a bruised heel, while Groenewoud skipped the women's contest as she recovers from arthroscopic knee surgery.

Dorey said he'd been taking a bit of a conservative approach to his runs as he worked towards earning his Olympic qualification, but he can now look to up the ante on some of his pipe hits with a spot in Sochi locked up.

"Now that I can stop worrying about trying to get my Olympic team spot I can focus on doing some more progressive runs," he said.

With no American skiers on hand in Calgary, the Canadians were the clear-cut favourites at the event. Dorey said he'll be looking to build off the victory as the competition gets stiffer in the weeks leading up to the Games.

"Although the field wasn't as deep as it will be for the next few contests, I can use this win as positive momentum moving forward into the next three competitions," he said.

For d'Artois, the fifth-place finish was an excellent result as he continues to break through with some early-season results. The 21-year-old fell on the opening hit of his first run, a double-cork attempt, but came back to post a score of 78.60 on his second run to land in the top five. Switzerland's Yannic Lerjen (78.80) edged d'Artois for fourth spot.

"I was very excited," said d'Artois as he prepared to leave for Colorado on Sunday (Jan. 5) to continue his competition schedule. "It's my best result at a World Cup and it gets me that much closer to potentially making the Olympic team, so that's cool.

"I know I have a run that can put me in finals, so now what I have to do is fine-tune it so that I can make it on top of the podium."

The local product also skied to a seventh-place finish at last month's Dew Tour contest. That result helped d'Artois earn an invite to the Winter X Games, which he received this week. It will be his first appearance at the X Games, which takes place Jan. 23 to 26 this year.

"That's some pretty big news for me," said d'Artois. "I'm so stoked to be able to compete there... X Games is the biggest comp of the year, other than the Olympics this year, so it's really exciting to know I'll be in the event."

Megan Gunning finished fourth in the women's competition from Calgary for the top Canadian result, while Keltie Hansen finished eighth. The entire Canadian team is now headed to Breckenridge for a U.S. Grand Prix World Cup stop, with the finals scheduled for Sunday, Jan. 12.