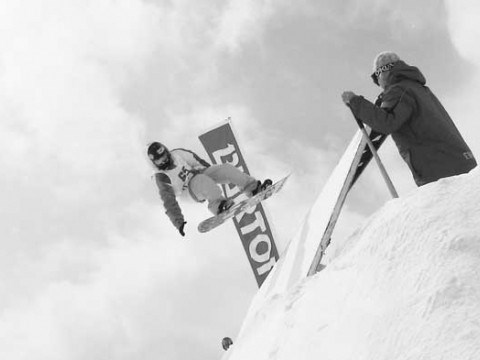 The format for last Saturday's 13 th annual Showcase Showdown was not easy, but the key to winning was to make it look that way.

Competitors started off with a massive big air jump off an extended table at the bottom of the park. Most riders stuck to spins but a few used the extra airtime to get inverted. One rider attempted a huge double wildcat that ended with a crash.

The bottom part of the course was a raised area with ramps on either side leading to a wall ride. There was a rail and a box in the middle that riders could either hit on the way up or the way back, or both.

The difficulty was in judging momentum. Too much and riders went flying off the back of the wall ride. Too little and riders wouldn't have enough speed to get to the rails.

Jesmond Dubeau was one of a handful of riders to get it right every time, and was rewarded with a $2,000 cheque, prizes and bragging rights.

Dubeau made the finals with the best two runs in the qualifier, then posted the best score on his first run of the finals to edge out reigning Showcase Showdown champion Andrew Burns.

"The top air was pretty much the same. I did a frontside 10 (1080 spin) and a backside rodeo 720 - I stuck with those because I felt comfortable on the jump," he explained of his choice on the first part of the course.

"The rails were a different story. You just did whatever you had the speed to do.

It was a tough morning for the event with more than 25 cm of new snow overnight, but Dubeau said it actually worked in favour of the event.

"The format was really good and it was well-organized. The jump was perfect and it probably helped that we got some snow last night because that made it softer and people were willing to try a few more things."

Dubeau's first run in the finals was worth a score of 27.8. Andrew Burns placed second with a 25.8, followed by Jay Wexler with a 24.4. Rounding out the top 11 were Pablo Aristeguieta, Andrew Wood, Scott Brown, Jonathan Versteeg, Dave Fortin, Yutaka Muraki, Geoffrey Brown and Braden Dean. Dennis Bannock also qualified for the finals but didn't compete in the final round.

Burns was happy with his result and admitted to having some trouble on the bottom of the course.

"It's always a super-fun contest, it's all friends and stuff," he said. "I tried, but I kind of blew it I guess... (Showcase Showdown) always has some kind of weird jib setup and the big thing today was people trying to deal with the bottom features.

Dubeau, Burns and the rest of the field are already looking forward to a rematch at the Grenade Games, an event organized by Danny Kass during the Telus World Ski and Snowboard Festival.

On the women's side it was Molly Milligan's day with two of the highest scores in the final. Star of Peace Quinn was second and Marion Bouwy third. Gillian Andrewshenko also qualified for the final but crashed hard on the big air. She managed to walk off course but was unable to finish the contest.

Milligan stuck with a stock backside 360 off the big air for most of the day but on her last run mixed things up with a corked 540. She also had trouble carrying momentum on the bottom of the course, but came up with a solution.

"It was really hard getting speed on the rails on the bottom part so I ended up just transferring - gong as fast as possible and just going from left to right on the wall ride on my last hit," she said.

"I sprained my knee two weeks ago so going out East was a little stressful for me, having that in the back of my head," she said. "I took Advils and worked through it and went to the physio who told me it was ride-able. But just getting past that mental block..."

It was also Milligan's best showing in the Showcase Showdown.

"I've never really done well," she said. "I'm not a pipe rider and I think that nerves have always gotten me... This year was more of a jumper so I liked it."