Manuel Osborne-Paradis wins super G at Lake Louise but John Kucera likely out for season
Dec 4, 2009 7:09 AM By: Andrew Mitchell 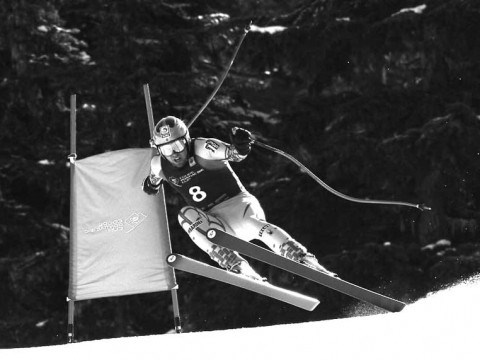 It was the best of times, it was the worst of times for the Canadian Alpine Ski Team this past weekend as the speed team made its Olympic year debut at Lake Louise.

The best was a gold medal performance in the super G by Whistler Mountain Ski Club alumnus Manuel Osborne-Paradis, although there was also some good to report from his teammates as well.

The worst was a crash in the same race that left world downhill champion John Kucera sidelined indefinitely with a broken tibia and fibula. He reportedly underwent surgery on Sunday evening and although his rehabilitation got underway immediately it's likely that he will be unable to represent Canada in the 2010 Olympic Winter Games.

The weekend got underway with the downhill, where both Kucera and Dixon had solid runs. Kucera placed sixth, less than 0.2 seconds off the podium, while Dixon placed a very solid eighth. Three other Canadians placed in the top-30 with Osborne-Paradis 16 th , Erik Guay 21 st and Louis-Pierre Helie 22 nd .

Kucera was happy with his result.

"My run was solid for sure," he said. "I think there are some sections that I was not as clean as I should have been and maybe could have skied better but that's racing, you never know."

Dixon would also have done a few things differently if he had the run over, but was content with his performance.

"I'm happy with my results," he said. "Yesterday I made a few mistakes. I am feeling really comfortable and confident with the training we had. I'm happy even if it was hard skiing. The light was a little flat but I just tried to make the best of it and looked for speed. I just tried to ski the best that I could."

Veteran Didier Cuche of Switzerland took the gold medal in the downhill. He was followed by Wener Heel of Italy. Carlo Janka, another Swiss skier, placed third.

In fact, the Swiss had four skiers in the top-10, including Ambrosi Hoffmann in fifth place and Tobias Gruenenfelder ninth. Canada and Sweden had two in the top-10, which left one spot for Austrian Michael Walchhofer.

Sunday's super G race took place in faster conditions and the Canadians were spectacular. Osborne-Paradis won the gold medal by 0.24 seconds over Austrian Benjamin Raich, with Walchhofer taking the bronze.

Erik Guay placed fourth, just 0.13 back of the podium while Dixon finished just 0.04 back of Guay to take fifth place.

Three skiers in the top-five at a World Cup super G is a record for the Canadian speed team.

"I don't think it gets any better than this," said Osborne-Paradis. "In super G I knew that I was making some good turns but I didn't expect this."

It was Osborne-Paradis's second World Cup win. He won a downhill at Kvitfjell, Norway last season.

"I'm really happy that everything is progressing well. I have been working on my technique and it's been getting better and I think the confidence is there. At this moment I'm going in the right direction so I'm pretty happy.

"I really think I skied well at the top but then for some reason I started holding back a little bit and I was round in my turns, not really riding my skis. But I'm glad today that I was able to stay around in the top five."

Two other Canadians were in the top 30 with Francois Bourque placing 27 th and Jan Hudec 29 th . Both are coming off knee injuries and skied a little more tentatively as a result.

Kucera's crash midway down the course cast a pall over Canada's party as he was airlifted off the course. Not only is Kucera, 25, the reigning world champion in downhill he was also a strong medal contender in three disciplines, downhill, super-G and giant slalom, heading into the 2010 Olympics.

Kucera ran into trouble on a steep section of the course when he lost traction and flew into the safety nets. It's unknown how long it will take to rehabilitate his broken left leg, but a statement from Alpine Canada verifies that he underwent surgery on Sunday night and will miss the 2010 Games.

The Canadian women's technical team continued to show improvement in Aspen this past weekend, with two women posting career-best results in the slalom and giant slalom races.

The giant slalom took place on Saturday. The top Canadian was Marie-Pier Prefontaine, who earned her first World Cup points with a top 30 finish. None of her teammates qualified for a second run.

Kathrin Hoelzl of Germany placed first, followed by Kathrin Zettel of Austria and Frederica Brignone of Italy - one of four Italians to finish in the top 10.

In the slalom the following day Anna Goodman had a career-best finish, ranking 11 th after her first run and 13 th after her second.

"It was so icy, it was definitely a battle today and I was happy with the way I fought," said Goodman. "It wasn't a feel-good course today, it didn't feel that good. But it's a step-by-step process and I hope to continue to take the next step the next race."

Goodman wasn't the only skier to earn points by finishing in the top 30. Rookie Erin Mielzynski placed 30 th after starting 60 th .