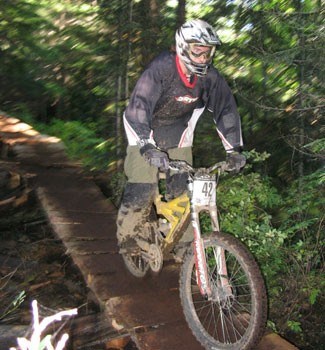 The fourth annual Max Vert Enduro became a war of attrition, with crashes and mechanical failures taking their toll on the field. By the end of the race, three riders were chainless, two bikes were missing rear derailleurs, one rear shock was blown and another bike had the rear swing arm knocked out of place. Add in about five flats, various brake malfunctions, and literally dozens of crashes, and you’ll get an idea of what the riders went through in this year’s race.

Seven of the top riders all managed to make 12 laps of the course, which was in the Garbanzo Zone, and included No Joke and In Tight. With an estimated 2,200 feet of vertical, that means the top riders managed to fit in 26,400 vertical feet of downhilling in just over four hours. To put that into perspective, Denali, the highest peak in North America, is 20,320 feet.

Only the riders that completed a lap before the four-hour mark were allowed to attempt another lap.

Despite the length of the trails, the race went down to the wire for the top riders, with less than two minutes separating the top riders for most of the race.

Chad Onyschuk and Chris Dewar rode most of the day together, building up a lead heading into eight laps. They chanced a short bathroom break almost three hours into the race, not realizing how close their competitors were, and were caught with their shorts down when a pair of riders passed them on course.

Eager to regain the lead, they picked up the pace and took a few chances. Dewar proceeded to rip off his rear derailleur, and Onyschuk crashed. Both riders would later return to the race, Dewar with only a single speed, but neither rider was in a position to get the lead back.

Junior rider Kristian Short took over as the leader, but only briefly before Dave Mayers made his way to the front. Short tried to chase him down, and at the end of the race he was just 30 seconds back of Mayers.

"It was good, but it hurt," said Short, when asked how it felt to descend more than 26,000 feet of technical singletrack in just over four hours. "I hurt my thumb riding yesterday, so it’s pretty sore, and my legs are starting to cramp up a little, but it went pretty well.

"I had one crash all day, which was where the guy who won the race got past me. I couldn’t reel him back in for the end of the race. I saw him a few chairs ahead of me on the chairlift, but that was it. I didn’t know how close I was until I got to the finish."

Short races in the B.C. Cup events, but missed the first two months of the season with broken ribs. He returned for the last three races, and was fourth in the junior expert category in the B.C. Cup finals.

The fact that he finished just behind Mayers and ahead of riders like Onyschuk and Dewar was not lost on Short.

"That was the best part of this. I wasn’t expecting to keep up to those guys, but I had a really good ride today, didn’t make a lot of mistakes, didn’t have any mechanicals or anything, and I kept up to some of the best guys. They had some bad luck, but I was right up there with them when it happened. It’s a huge confidence boost for me," he said.

Dave Mayers, who has 77 days riding the park this season, says he was well prepared for a long day of riding, but was surprised by how many laps they managed to fit in.

"I didn’t think I’d be doing 12 laps today, I thought maybe nine or 10. One minute you thought you were on your last lap, and the next you were back on the chair again," he said.

Mayers also liked the choice of trails for this year. In past years the Enduro was run on the lower mountain, with riders doing wide open trails like A-Line and Dirt Merchant.

"I thought it was great. No Joke is one of my favourite trails on the mountain, I was definitely impressed that they chose it because it is hard, really rocky and rooty, but it kept the race interesting," said Mayers.

"My hands were just killing me by the end, I was barely hanging on for the last four laps. My hands actually slipped off the bars a couple of times, but somehow I managed to catch myself before disaster. I didn’t crash once today, which was amazing.

"As long as you keep it pinned and don’t have any mechanicals, then anybody can win this race."

Second place in the men’s category went to John Bir, followed by Onyschuk in third. Michael Traubridge, Tim Chadd and Coley Genzel also managed to fit in 12 full laps in the time allotted.

In the junior category, Short was followed by Kyle Salisbury and Chris Ashton who finished with 11 laps each. Special mention also went to 12-year-old Tyler Allison, who finished fourth place among juniors with 11 laps the day after he won the Under 15 category in the 72.8 km Cheakamus Challenge.

Alex Prochazka, 13, also managed to squeeze in 10 laps, or about 22,000 vertical feet, after he lost his chain on the second lap.

Angela Teng was the only competitor in the women’s category, but pulled out after her second lap after a crash that pitched her sideways into a tree. Carly Rheault managed six laps racing alone in the junior women’s category, riding her last two laps with malfunctioning brakes.

The winners in each category received season passes to the bike park next summer. Fittingly the winner of the draw prize pass was junior Taylor James, who somehow finished the race with a broken swing arm.

The proceeds from the event went to the Whistler Off Road Cycling Association, and will go towards trail maintenance projects in Whistler.