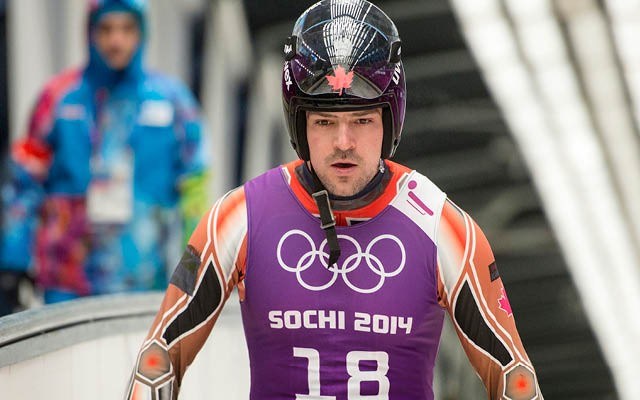 READY TO RACE Sam Edney wraps up a training run at Sochi's Sliding Center Sanki on Tuesday, Feb. 4. His men's singles race gets underway on Day 1 of the Olympics. photo courtesy of Canadian Olympic committee

Without a doubt, Canada has never sent a luge team like this to the Olympics.

Since the 2010 Games, the Canadian crew has spent much of its time rewriting the sport's national history books, consistently turning in record-setting performances at World Cup and world championship races.

But it's all been building up to this — one more chance to make history on the biggest stage of all.

Luge gets underway Saturday, Feb. 8 when men's singles competitors take their first two of four runs at the Sliding Center Sanki. Canada has never brought a luge medal home from the Olympics before, but to come back empty handed this time around would be — to put it mildly — a disappointment.

Sam Edney has been a mainstay on the Canadian team as its athletes have gone from also-rans to podium threats. As the 29-year-old prepares for his third Olympics, Edney said it's been "inspirational" to watch the success of his teammates as they've collected World Cup medals regularly in recent seasons.

He's been a key piece of the team relay squad that will be in the mix for a medal in Sochi, but Edney is starting to feel like it's his turn to stand alone on the podium.

"I've seen this team go from being an ultra-young, rookie team, and knowing from where the program has come in so many years, it's a huge feeling of satisfaction to be part of that team," Edney told Pique on Tuesday, Feb. 4 from the athletes' mountain village at Krasnaya Polyana. "But absolutely, it's made me hungry for that medal."

Alex Gough has established herself as one of the world's top female sliders, now with two world championship bronze medals to her credit and more than a dozen podium finishes at the World Cup level. She was the only non-German to place on the podium multiple times this season, capturing six medals from nine races.

Meanwhile, Kim McRae earned the first top-three finish of her career late this season, while the doubles duo of Tristan Walker and Justin Snith also broke through for a World Cup bronze this winter, another Canadian first.

Though Edney has racked up a number of top-six results, he has yet to get over the hump and post the podium finish he's been chasing for years.

"I remember I was watching the race when the doubles got their medal, and it was one of the proudest moments I've had in the sport," said Edney. "I know that I've put in the hard work that they've put in, so it's definitely something I feel is close, and I know I can do it, but I want it that much more now."

Sochi might be the ideal place for Edney to take that next step into the top three. Although Gough and the relay team — featuring Gough, Edney, Walker and Snith — present Canada's best chances for luge medals at the Olympics, Edney's continued rise through the men's singles ranks have him poised to get one on his own. And he's headed into these Games as confident as ever.

"At Vancouver-Whistler, I expected something, but I feel like coming to these Games, I'm just that much more prepared and ready for it," said Edney, adding that he's hopeful the luge team can provide an early spark for the entire Canadian Olympic squad in the early days of the Games.

"I'm eager to race and I'm hoping that I can help be part of a group of luge athletes that inspire the Canadian team to exceed what we did in Vancouver."

Tuesday was the first day of official training on the Sochi track, and Edney said a "feeling of comfort" came back to the entire Canadian team on the ice there. The Canadians grabbed a bronze medal in team relay, a new Olympic event this year, during last season's test event in Sochi and ranked second only to Germany in World Cup racing this winter.

"The team has a lot of confidence coming into the Olympics, but at the same time we know there's a big task ahead, and that's to win the country's first Olympic medal (in luge)," said Edney. "It's just about, on that day, performing to the level that we've trained for and what we expect of ourselves."

Edney, John Fennell and Mitchel Malyk are in action on Feb. 8 and 9; Gough, McRae and Arianne Jones compete in women's singles on Feb. 10 and 11; Walker and Snith's one-day doubles race goes Feb. 12; and the team relay is scheduled for Feb. 13. The final runs each day will get started between 7:45 and 8:40 a.m. PST.