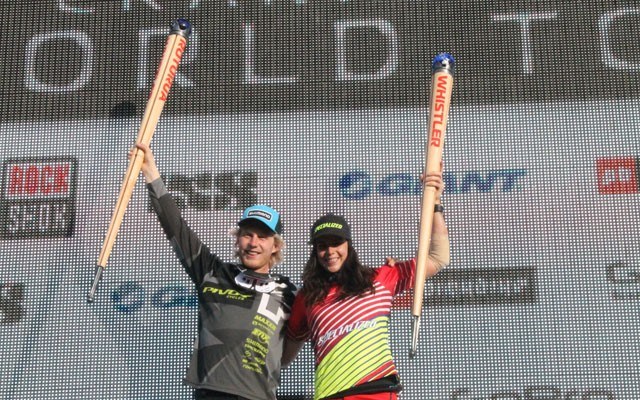 THEY CAN BE ROYALS Bernard Kerr and Anneke Beerten raise their sceptres as King and Queen of Crankworx. Photo by Dan Falloon

In past years, being the King and Queen of Crankworx meant conquering Whistler.

In 2015, for the first time, it meant conquering the world.

Dutch rider Anneke Beerten accumulated plenty of points early in the week to have the women's title in hand by Friday, Aug. 14 but Great Britain's Bernard Kerr went right down to the wire to eke out the men's title. Both took a $25,000 prize.

Kerr came into the week with the advantage, though French rider Adrien Loron took advantage of Kerr's early absence at the UCI World Cup in Windham, N.Y. to wrestle away the lead. Kerr, however, pulled even with a third-place showing in Friday's dual slalom before taking a 10th-place in Sunday's Canadian Open DH to defeat Loron by just 10 points.

"It feels so awesome. I only just did it, so it's awesome," said the giddy Kerr. "(I just wanted) to ride every event and not go out."

Loron had two wins to Kerr's one, so he held the advantage entering the final day and put the onus on Kerr to find some extra points. He had some familiarity with the speedy set-up for the downhill, and knew exactly what he needed to do.

"I know I ride good on this course, but I got held in the gate for 20 minutes," Kerr said. "I knew 'Put a smooth run down, man. Hammer the pedals and you got this.'"

Kerr sacrificed a chance at major points in the dual speed and style contest in order to compete in New York while Loron earned 20 points with an eighth-place showing. When he did arrive, though, he scored points in four of five events, including some challenging ones.

"I did really good in slalom, and even pump track, I got top-eight, and that's tough for me," he said. "I can't thank everyone enough — the mechanics worked so hard this week."

Kerr already has an eye on defending the title in 2016 and plans to employ a similar strategy — go hard.

Beerten secured her crown by making it to the final four of the dual slalom, eventually falling to American Jill Kintner in the finals. Here in Whistler, Beerten competed in six events, earning points for a top-10 finish in five of them, to secure the win by 125 points over hard-charging Canadian Casey Brown and by 250 points over Kintner. At 150 points a pop, Brown's two wins and Kintner's three helped them climb the ladder, but Beerten's three second-place showings (100 points each), and her established advantage coming into Whistler proved to be enough.

Though she was home and cooled relatively early, it was because of her hustle.

Beerten came into Whistler sporting stitches in her knee. Those were removed early, but she earned seven in her elbow and one in her hip after a fall in the Official Whip-Off World Championships on Aug. 13. Still, she took a second in the pump track that night before placing second in the dual slalom the next day.

"(It's) amazing. I'm super stoked. I've been looking forward to this event the whole year and I pushed hard every race," she said shortly after clinching the title. "This week has been really challenging with injuries. Taking it here tonight is amazing."

Beerten acknowledged she wasn't feeling well toward the week's end after six events, including an enduro race early on. When she officially clinched the title, she planned to enjoy the rest of Crankworx as a spectator.

"I'm going to chill out," she said emphatically after the slalom race. "That's all I'm going to do."

While Beerten wasn't sure her schedule would align for her to defend the throne in 2016, she said she'd enjoy the first-ever sceptre given out by the festival.

"It's always going to be remembered as the first one, so I'm happy to take that," she said.

Crankworx Events Inc. general manager Darren Kinnaird said the final few days of the battle to be king went as well as he could have hoped. Though a lot of work was needed to make the tour go, Kinnaird was sad to see the year wrap.

"I'm a little melancholy. We had a great year," he said. "We couldn't have asked for a better first year."

In other world tour news, stakeholders in the Rotorua event hope Crankworx Events Inc. will extend their commitment to the New Zealand locale.

"Right now, it's a three-year deal. We want it to be a 10-year deal, or longer," event manager Ariki Tibble told the Rotorua Daily Post on Aug. 11.

Kinnaird said there hasn't yet been any movement on extending the deal, as he and the rest of the brass has put on two competitions in just over a month. He does enjoy the venue and would like to see it entrenched as part of the tour long-term.

"They've been talking about that since we were there, the first couple days," Kinnaird chuckled. "Rotorua's a special place. It's a great home for Crankworx and hopefully it makes sense for years to come."