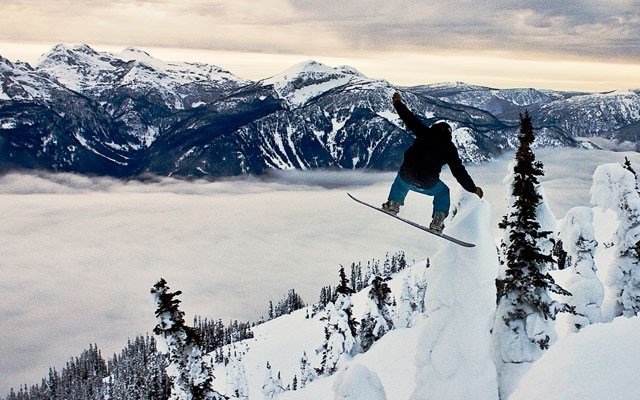 A former Whistlerite has come up big overseas.

In the first year snowboarders were allowed to enter, Kai White, 22, throttled the competition at the North Face Freeski Open at Remarkables, New Zealand on Sept. 4.

White, who originally hails from Quadra Island and now resides in Revelstoke, lived in Whistler for two years shortly after the 2010 Winter Olympic Games.

In the final in New Zealand, White posted an average score of 90.25 to best runner-up Roland Morley-Brown of New Zealand by eight points. American Brian Stenerson was 4.5 points back of second place to round out the podium.

The field flew a little under the radar, as Stenerson was far and away the top qualifier, placing 20 points up on third-place White in advance of the finals.

The qualifiers were initially postponed for two days because of high winds creating icy conditions on the hill and, when reached via email, White explained conditions hadn't improved greatly when they were held. Still, he did his best to achieve and finish on the top half of the cut.

Wrote White: "I dropped into my line and had a good double drop on the top section, but in trying to shave speed before the bottom sections I had a quick wash out that hurt my fluidity and control scores. (I) rode into another drop through the bottom section but overall knew I could have done better.

"Before I got the results I was worried that my wash out was going to affect me more, but in turn most others in the snowboard division had a wash out, or bail, due to the dust-on-crust conditions, so I was able to come away with 3rd in qualifiers."

After another two-day break, the seven who made the cut returned to the mountain for the finals. White noted he'd been researching a particular line with an exposed face that led to a mandatory double-drop for competitors. He initially thought the section wasn't a possibility because of too much ice and too little snow, but when 10 centimetres of the white stuff had fallen in advance of the finals, it crossed his mind again. Being the last competitor to go, White figured he'd better take the risk.

"...(I) made some turns around the rocky upper exposed section of the line and came into the funnel where it seriously looks like you're about to send off a 100-foot cliff (30m) only five feet (1.5m) before can you see your line," he recalled.

"(I) pulled off to the left and let my stuff pass by, so I could see what I was dropping into, and then sent the first drop, landed smooth and fired right off the next one sticking the landing and straight lined it out though the bottom gates. As soon as I stuck the second drop I knew I had a solid line.

"After researching the line and staring at it for ages to finally getting to do it and stomp it was a feeling I'll never forget, no doubt a highlight of my career in the competition sense."

The judges noted the drop White used is rarely an option, and his use of it caught their eyes.

"It's not often there's enough snow in there and it's especially hard on a snowboard," head judge Dion Newport told the event website. "It was incredible to watch a snowboarder tackle it and nail it."

White will continue to compete this winter in hopes of cracking the Freeride World Tour.