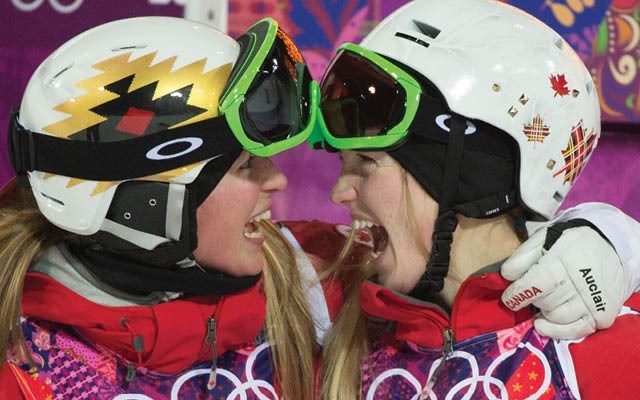 The opening days of the Winter Olympics in Sochi marked a coming-out party for Canadian freestyle skiers. Or, in the case of Alex Bilodeau, a re-introduction.

Canada found itself near the top of the medal standings after the first five days of the Games, thanks in large part to the huge amount of hardware collected from freestyle ski events — three gold, two silver and one bronze.

The women's and men's Canadian moguls team set the bar high in the first competitions from the Rosa Khutor Extreme Park, taking four of a possible six medals — the most won by any nation at an Olympics before.

Alex Bilodeau delievered an unprecedented gold at the 2010 Games when he became the first Canadian to stand atop the podium in a home Olympics. His gold medal in men's moguls on Monday, Feb. 10 marked another first, as he became the first athlete to repeat as champion in a freestyle ski event.

And just as expected, the battle for gold came down to a head-to-head battle between Bilodeau and his world-champion teammate, Mikael Kingsbury.

"I need to retire now, because he's pushing me too hard," Bilodeau said of Kingsbury to the Canadian Press. "That's the best I can do."

Taking his last Olympic run, Bilodeau put together an electrifying trip down the bumps in the six-skier medal round to reclaim his place atop the podium. The 26-year-old said he couldn't have envisioned himself completing a better run.

"I've dreamed about laying down a run like that," said Bilodeau. "That's it. I know that (Kingsbury) can deliver a better run than me. I know he's got more talent. But I put the pressure on him."

The last competitor of the night, Kingsbury put together a solid effort in his bid for gold, but simply wasn't as tidy when navigating the course, and settled for second behind his rival and teammate.

"I did a great run with just a little mistake, Alex deserved it today," said Kingsbury, who at 21 will almost certainly take another run at Olympic gold in 2018.

At one point, with three Canadians qualifying in the top three positions heading into the medal final, thoughts turned to a red-and-white sweep of the podium. However, Marc-Antoine Gagnon fell back to fourth, and the bronze went to Russia's Alexandr Smyshlaev, to the delight of his home crowd.

Philippe Marquis, originally left off the Canadian Olympic team but given a spot in Sochi as an injury replacement, had an inspiring performance of his own, finishing eighth.

Although Bilodeau and Kingsbury finishing in the top two positions was exactly what everyone was predicting on the men's side, considering the way they've dominated the World Cup season, Justine and Chloé Dufour-Lapointe doing the same on Day 1 was a bit of a surprise.

Not that the sisters from Montreal were undeserving medallists when the women's event wrapped up on Saturday, Feb. 8, but because neither were the clear-cut favourite going in.

The Dufour-Lapointes both came through when it mattered most, while reigning Olympic and world champion Hannah Kearney of the U.S. struggled and settled for bronze, unable to ski cleanly out of the landing on the top air.

Justine and Chloé holding hands together on the podium could very well be Canada's lasting image from these Games. And it came on the first day medals were handed out.

"We will always share that moment together," Justine told CP. "It's beautiful, just really beautiful."

Justine posted a score of 22.44, then watched Chloé card a 21.66 to guarantee a pair of medals for Canada. Kearney, the top qualifier into the medal final, went last, and the Canadian celebration started the second her 21.49 went up on the board.

"We had four years (since the Vancouver Olympics) to get prepared," Chloé told CP. "When I set foot in this country, I knew I was going to be ready on that date."

The debut of slopestyle skiing at the Olympics will be remembered for Canadian triumph, though here in the Sea to Sky, it was at first a moment of great concern.

Dara Howell and Kim Lamarre took gold and bronze for Canada in the women's final on Tuesday, Feb. 11, while Whistler's Yuki Tsubota placed sixth despite a spectacular and scary crash on her final jump of the Games.

Tsubota is reportedly OK, recovering from a broken jaw after she cased a 900 on her second run of the finals, doing everything she could to be part of the podium discussion.

After a solid rail section, a 540 and switch 540 off the earlier features, the 20-year-old came up short trying to land the 900, and the jarring impact saw her knee collide with her chin before she slid, motionless, to the bottom of the slope. She was carried away on a stretcher, but Canadian Freestyle Ski Association CEO Peter Judge told media that Tsubota would be alright.

"The initial assessment is that there is an injury to her jaw," said Judge. "There's nothing other than that. She didn't have a concussion, so she's clear.

"She's in a good frame of mind. Nothing we have to be overly concerned about."

Tsubota's first-run score of 71.60 stood up for sixth place.

Howell qualified in first position, giving her the last spot on the start list for the final. She only needed one run to take the gold, and what a run it was, earning a score of 94.20 from judges after a switch cork 720, switch 900 and a bow-and-arrow 540.

"I think that's the best run I've ever done in my entire life," said the 19-year-old from Huntsville, Ont., to CP. "The course just worked for me today... I couldn't be happier."

Montreal's Kaya Turski was the overwhelming favourite going in, but it wasn't the X Games champion's day, as she fell on both of her qualifying runs and did not advance to the final. She had battled a mystery virus all week and said she simply didn't feel like herself in Sochi.

"I don't think I've ever cried for 10 days straight in my life," Turski told CP of the virus's effect on her. "So in a way I'm just glad it's over. I just want to go in my bed and take some medication and just relax."

Much has been made at these Games about the IOC's refusal to allow Sarah Burke memorials on their uniforms or equipment, but Burke's influence and presence was certainly felt on this day.

"This medal is definitely for Sarah," Howell told the media. "I said the other day that I really hope a Canadian brings home a gold medal and it will be for Sarah.

"Sitting up here and being that person, I can't believe it."

Whistler Racket Club back in the swing of things
Jun 19, 2020 2:00 AM
Comments
We welcome your feedback and encourage you to share your thoughts. We ask that you be respectful of others and their points of view, refrain from personal attacks and stay on topic. To learn about our commenting policies and how we moderate, please read our Community Guidelines.