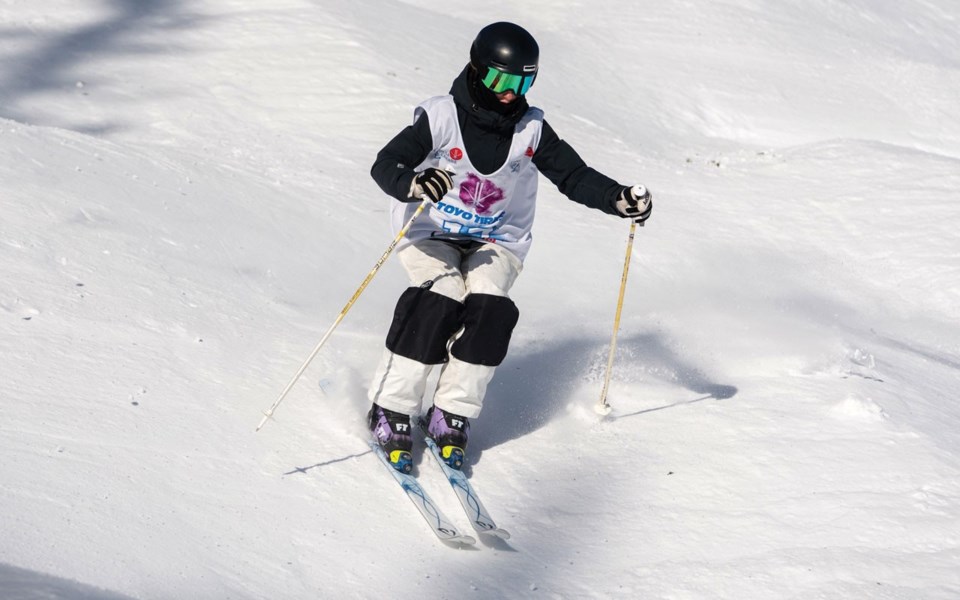 ON THE CHASE Chase Capicik excelled at the FIS Junior World Ski Championships in Italy.

Freestyle Whistler alums had a banner year on the junior world stage, as five athletes competed at their respective championships recently.

Firstly, Skye Clarke and Josephine Howell were in Klaeppen, Sweden for the FIS Junior World Ski Championships for slopestyle and big air.

"It was my first time competing at a world level, so it was pretty special to be able to represent Canada," Clarke said.

Clarke, 16, explained that she was able to tackle the course smoothly while showing off considerable skills for the judges.

"I was pretty consistent. I grabbed my tricks well and I thought I landed pretty clean," she said. "The fact that I spun to the left and the right, and I had a switch move, definitely helped. On the rails, I had a right spin and a left spin ... I had some variety."

Clarke added that while she performed well, she thinks she could do better in a future year, as she had some nerves going into her first-ever international competition.

"It was such a great experience but I think the one thing that I take away from it is skiing and having fun. I felt there was more pressure this contest because it was a world competition," she said. "If I could go into it just skiing and having fun, that would be a bit better. I got a little bit stressed, which I think affected my skiing."

Howell, meanwhile, acknowledged being a little bit baffled by the scoring, as she didn't land any of her runs the way she had envisioned.

"It was kind of funny. I fell on all my runs," she said. "I was surprised that they gave me a good result, so it was cool.

"My jump was good, but I just had a weird landing. I think they didn't take away too many points for the landing."

Howell, 17, didn't blame the course, though, calling it one of the best she'd ever skied. While she was initially taken aback by the international flavour, she was soon able to settle in.

Howell was excited because Estonia's Kelly Sildaru, who she called the world's best women's skier, junior or not, was in attendance. Sildaru, who has been winning X Games gold medals since she was 13, ran away with both gold medals at Junior Worlds as well.

"It was pretty cool to meet her and compete against her," Howell said.

Like Clarke, Howell feels better prepared to tackle similar events should she qualify in the future.

"I feel more prepared to compete at that level now," she said. "I only knew about five people there, so it was more of a feel-it-out situation so I think in the future, it'll feel more comfortable."

Three other skiers competed at the FIS Junior World Ski Championships for moguls and dual moguls on April 5 and 6 in Chiesa in Valmalenco, Italy.

Linton, 17, said she exceeded her expectations by sneaking into the top 10.

"It was really cool. I would have just been stoked doing a top-to-bottom run with my tricks, but I ended up doing a lot better than I thought I was going to do," she said. "Making finals itself was a great feeling and ending up in 10th, it was really cool to be the top Canadian girl."

One element that benefitted Linton was a massive snowfall that transformed the course to the point where it started to feel homey.

"The course had changed quite drastically to a really awesome West Coast-style course, which was definitely good for me. That's what I've trained on all my life," she said. "My runs were really good. I stuck with a 360 to a backflip just to make sure I got the solid run down, which I did. "It was clean, it was quick, it was good. I was really proud of it."

Linton took her results as proof that she is on the right path, and is further emboldened to pursue her passion.

"What I brought from this competition is if I really focus and put the work down, I can really get it done. This experience has made me realize that hard work really does pay off," she said.

Meanwhile, Capicik, at just 14, was the youngest of the locals attending either event. She's made the jump from Timber Tours to her first NorAm Cup contest to Junior Worlds in the course of a season.

"This year, I had started skiing some of the bigger comps, so I was really excited to be named to the team at a big event like that," she said. "It's fun, because I have a lot of friends and a lot of people along the way supporting me."

Capicik said she fell ill almost immediately after landing in Italy and wasn't able to train, putting her behind her competitors. However, going in without major expectations, Capicik was thrilled to crack the top 20 in an event where she was going primarily to soak it in.

"I had to work on speed. I was there just for experience, not to go out there and win," she said. "I got the experience to see what it's going to be like in the future.

Cordell, meanwhile, was also happy with the course change resulting from the 100-centimetre snow dump preceding the competition.

"They ended up rebuilding the course before the competition, which added a bit of a surprise," he said.

While Cordell, 18, felt he could have placed higher, there were still several positives he took from the experience.

"I landed my run but didn't do as well as I thought I could have," he said. "I messed up in my jumps a bit, but overall, my skiing was pretty good and my time was fast, so I was happy with that."