Freestyle skiers rake in the medals at Apex 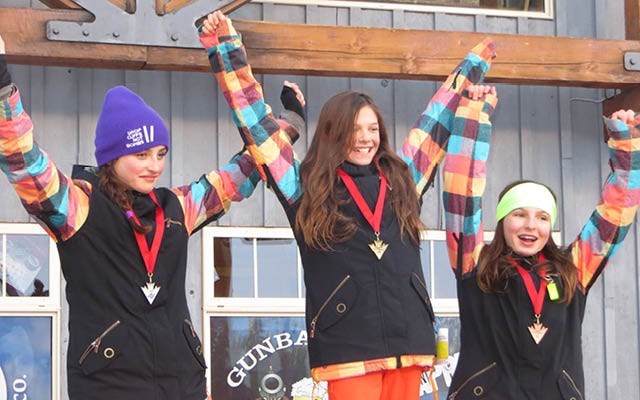 Whistler Blackcomb Freestyle Club skiers collected a whole bunch of hardware when competing in the first Timber Tour event of the winter at Apex last weekend.

Luke Smart led the way by capturing three medals at the youth level, winning the Jan. 17 slopestyle, placing second in the Jan. 18 moguls event and grabbing another gold in the Jan. 19 big air contest. It was a Whistler podium sweep of the youth boys' slopestyle podium, with Chase Ujejski and Lucas Pelletier joining Smart in the top three, and Evan Low finishing just off the podium in fourth. Other locals earning a top-10 finish in the age group at Apex were Sam Cordell, Carter Krasny, Evan Phillips and Max Edwards.

Sofiane Gagnon picked up back-to-back victories in the juvenile girls' group, as she won gold in slopestyle and moguls. Brendan Kelly took a turn atop the podium as well in the junior boys' moguls event.

Charlie Armstrong rounded out the medal count with a bronze in juvenile boys' slopestyle, edging teammate Aiden McConnell for the last podium spot.

The younger Whistler Freestylerz were also in action at Apex, with 31 of the club's skiers aged eight to 12 combining for 35 medals over three days.

Leading the way were Maia Schwinghammer, who swept the 12-year-old girls' events, and Chase Capicik, who was also a triple-gold medallist in the girls' U10 group. Erin Wilson, Lynette Conn and Josephine Howell all earned three medals from three events as well.

In boys' competition, Lucas Cruz won the 12-year-old level's moguls and slopestyle events while grabbing bronze in big air. Oscar Van Dongen (U10) was a winner in moguls and big air and a slopestyle bronze medallist.

See www.bcfreestyle.com for full results. The next Timber Tour event is in Prince George, running Feb. 7 to 9, while the next Super Youth contests are at Silver Star in March.

GYMNASTS OFF TO GREAT START

The Storm Troupe gymnastics team from Whistler Secondary School was extremely impressive during this past weekend's high school invitational meet in Delta that kicked off the squad's competitive season.

In Level 3 competition, Caitlin MacConnachie's performances earned her the all-around gold medal, as she took first place in all events except the vault, on which she finished third. Caleigh Lamont made it a one-two finish in the all-around standings after first-place finishes on the vault and floor exercise, plus a runner-up result on the bars.

Hannah Peatfield was the all-around winner at Level 2, having won gold on vault and beam while earning top-six finishes on the bars and floor.

Nicole Boulanger showed no rust when returning to competitive gymnastics for the first time in several years, earning an all-around Level 1 gold thanks to wins on the vault and bars. Also at Level 1, Jasmin Gebauer-Barrett was excellent in her first-ever meet, finishing second on the floor and fifth on beam out of 40 gymnasts. Erica Harrison of Howe Sound Secondary also travelled with the team and posted a 12th-place floor-exercise finish in her competitive debut.

The Storm Troupe will open up the gym to spectators on Jan. 31 between 4:30 and 7:30 p.m. for a mock meet as the gymnasts prepare for further competitions later in the year.

"The ski jump facilities in the Callaghan Valley are among the best in the world and the perfect place for our athlete to hone their skills and challenge the world's best," said Curtis Lyon, chairman and high performance director for the two sport organizations, in a release. "We see the venue as an integral part of the sport in this country and one of the keys to our success."

The national team will be at the 2010 Olympic venue to train from Jan. 27 to Feb. 1 in preparation for the Sochi Games.

Meanwhile, a new youth ski jumping program that will be known as Flight 2022 will launch in March, welcoming children aged eight to 12 to earn an introduction to ski jumping.

The annual Spud Valley Loppet returns to Pemberton on Feb. 2, with registration now open at www.zone4.ca.

This year marks the 25th running of the cross-country ski race, a 12-kilometre classic course that runs from Ronayne Farm to the Lillooet River forestry bridge. The race, which starts at 10 a.m., will be followed by lunch at Fougberg House.