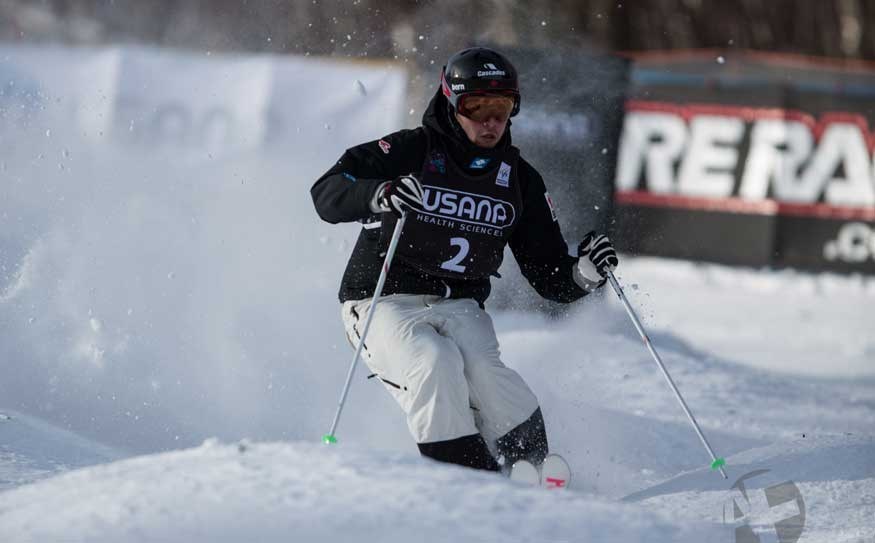 The Canadian freestyle ski team raked in the medals once again, this time with a triple World Cup at Deer Valley, Utah — moguls, aerials and dual moguls — and a halfpipe competition at Park City, Utah.

Mikael Kingsbury kicked off the week's medal streak with a win in the single moguls, followed by teammate Alex Bilodeau in second. It was Kingsbury's fourth win this year and his 19th straight World Cup medal.

"I'm very excited, to do a podium here and win, it's the best feeling," said the 20-year-old Kingsbury of the night event. "It's the best course in the world and I always look forward to this stop more than any other place. The course and the crowd and everything is just perfect here."

In the end, Kingsbury and Bilodeau were separated by just 0.18 points, while American Patrick Deneen placed third by almost half a point.

"Alex pushed me all day with his skiing, he was skiing super well and it was a good battle today," said Kingsbury. "I know he wants to win, and I want to win, so we push each other to the max. It's going to be interesting for duals (on Sunday)."

For Bilodeau, who took off most of last season to train, the race was another opportunity to fine-tune his skiing before he defends his Olympic title in 2014.

"For me, it's the first time this season that I showed my best skiing," he said. "I made a small mistake in the middle section, but other than that I'm really happy."

Phil Marquis also made it into the six-skier super final, where he placed fifth overall. Simon Pouliot-Cavanagh and Marc-Antoine Gagnon also made the finals, placing ninth and 12th respectively.

In the women's event, it was a rare shutout for Canada with none of the women making the super finals to be in a position to podium. Audrey Robichaud just missed the cut-off in seventh place, followed by teammate Justine Dufour-Lapointe in eighth and Andi Naude in 12th. Chloe Dufour-Lapointe was 17th, Maxime Dufour-Lapointe 20th and Whistler's Chelsea Henitiuk 22nd.

The Americans swept the podium with Hannah Kearney on top of the podium, followed by Heather McPhie and Eliz Outtrim.

Gerrits placed second on Saturday, between Maxime Gustik of Belarus and Michael Rossi of the U.S.

The athletes used the new World Cup and World Championship format, which calls for four jumps instead of the usual two — a qualifier, a round-of-12 jump, a round-of-eight jump and a super final for the top four. Making things even more challenging, athletes have to perform different jumps in the three final rounds, which has proved a challenge for athletes with stock jumps they have relied on in the past — and the level of difficulty of jumps sometimes goes down from round to round as a result as athlete's empty their bags of tricks.

"I'm on top of the world," said Gerrits after picking up his silver medal. "There's not much I could have done better today and to get second place with what I did was awesome."

As for Rochon he got into trouble in the first round after landing too far down the transition, and placed 24th overall.

On the women's side, Xu Mengtao and Xin Zhang of China were first and second, while Laura Peel of Australia took the bronze medal.

At the final event, the dual moguls, Alex Bilodeau climbed to the top of the podium for Canada after edging out Deneen in the finals, while American Bradley Wilson edged out Russia's Alexandr Smyshlyaev for the bronze.

"It's definitely very good to be back on top of the podium and I'm so happy with my skiing," said Bilodeau. "It was improving every run today and so it's looking good for the rest of the season."

Bilodeau hoped to face Kingsbury in the medal rounds, but his podium streak came to an end when his ski popped off before the second air in the quarterfinals.

Kingsbury placed fifth on the day while Marc-Antoine Gagnon was seventh.

Canada was back on the podium again in the women's event, with Justine Dufour-Lapointe winning the silver medal behind Hannah Kearney.

Also qualifying in the top 16 were Audrey Robichaud, Andi Naude and Maxime Dufour-Lapointe, who finished 13th, 14th and 15th respectively.

While the freestyle moguls and aerials teams were at Deer Valley, the national ski halfpipe team was just up the highway at Park City for a U.S. Grand Prix event that doubled as a World Cup. It was the first event so far this season where no Canadians landed on the podium, although they came close.

In the men's competition, David Wise and Torin Yater-Wallace were first and second overall, followed by Kevin Rolland of France. Canadians Mike Riddle and Matt Margetts made the final and placed sixth and seventh respectively. Whistler's Simon D'Artois made the finals but crashed hard, sustaining a concussion that led to him being airlifted to hospital as a precautionary measure. He spent the night in the hospital, but is expected to make a full recovery.

He finished 11th on the day, his best result to date at the World Cup level.

"For the rest of the season it's looking okay," he said on Wednesday. "I will most likely not compete (at the Olympic test event) in Sochi, but have a couple more events that I will be able to ski in. My season is not over yet."

D'Artois said he trails the other athletes on his team when it comes to the Olympic selection, but with a few more good results this year and a strong start next year he says he has a chance.

In January, the team also lost Justin Dorey in the Dew Cup. Dorey separated his shoulder and was expected to return after some time off, butç found out weeks later that he would require surgery.

Despite the loss of two athletes, D'Artois is confident that the healthy members of the team will qualify for the maximum number of quota spots at the Olympics. "We have a very strong team," he said.

He was also surprised by the media coverage of his injury and comparisons to Sarah Burke's accident on the same pipe.

"I think the media has been a bit intense in covering my crash. Five male athletes fell that day and you don't hear anything of the other four crashes on the news. The fact that mine was a head injury and that Sarah had hurt herself in the same pipe a year before does make it stand out, but to make our sport look more dangerous than any other action sport is unnecessary.

"If the media wants a story, why not write about the relation between physical activity and hurting yourself. They go hand in hand."

On the women's side, Canada's Rosalind Groenewoud was left off the podium for the first time this season, placing fifth overall in a close contest where just 0.6 points separated fifth from third. Maddie Bowman of the U.S. was first, Ayana Onozuka of Japan second and Virginie Faivre of Switzerland third.