Pilots taking part in the 2012 Canada Paraglide Nationals got in five days of flying and competition in the Pemberton Meadows last week, following five different courses that ranged from 47.4km to 69.6km in total distance.
Aug 15, 2012 9:00 PM By: Andrew Mitchell 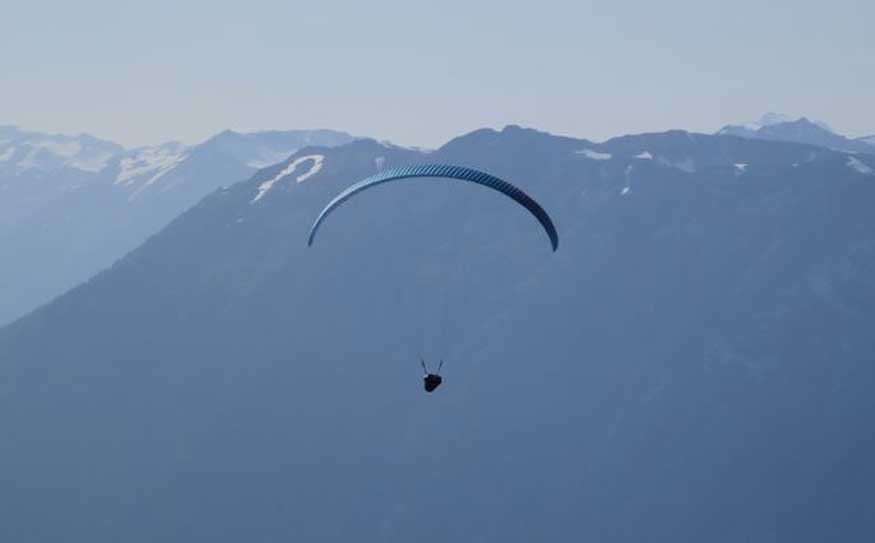 Pilots taking part in the 2012 Canada Paraglide Nationals got in five days of flying and competition in the Pemberton Meadows last week, following five different courses that ranged from 47.4km to 69.6km in total distance.

Taking off and landing in the same area, they would navigate their way around a course while a GPS, or two, tracked their location. Points were allocated for time, for hitting GPS targets and for the landing, with a maximum of 1,000 points for each day of competition.

When all was said and done, Denis Cortella of France placed first overall with 4,820 points, winning the fifth day and earning over 930 points on the other four. In second was Matt Senior from New Zealand with 4,717 points, followed by Andy Macrae of the U.S. with 4,602. The top Canadian, and the Canadian champion, is Frederic Bourgault, who finished fourth overall with 4,489 points. Jim Orava, one of the event organizers, placed a solid 10th overall in 3,491.

The top female pilot was Nicole McLearn, who is a regular in Pemberton. She finished 11th overall out of 73 athletes, finishing with 3,376 points. Tonya Roumiantseva of Canada and Claudia Schwab of Germany were second and third in the event.

There were also a few less competitive categories in the event, and athletes could be counted in more than one category. Pal Takats of Hungary was first in the "Relaxed" category with 4,087 points, followed by Jesse Williams of the U.S. with 2,434 and Roy Morris of the U.S. with 2,202. Karen Girouard was the only female in the group, finishing with 528 points.

In the Sport category, Pal Takats was also first with his result, followed by Canadian Igor Tolsky with 3,820 points and Konstantin Terentjev of the U.S. with 2,853. Magali Legault was the first female with 1,341 points, with Tonya Roumiantseva in second with 1,100 and Claudia Schwab in third with 938.

The competition wrapped up under a shadow after Seattle's John Clifford crashed into the Lillooet River on the third day of competition and drowned.

At the time, organizers had called the event as a storm front was moving into the area, although all but three paragliders had returned to the ground before Clifford, a married father with a five-year-old daughter, was struck by wind while making a turn, and fell. The incident is still under investigation

While the tragedy impacted the event, organizers believe that one of their goals — to get international recognition for the quality of the paragliding in Pemberton — succeeded. The event drew athletes from almost 20 countries, including Europe and South America, all of which voted to continue the competition after the loss of Clifford.

In fact, the response was so positive from visiting pilots that organizers posted a warning on the web page. "Local residents and businesses should be prepared to be inundated with paragliders, their friends and families from all over the world next year, with more and more in years to come. Pemberton is now firmly established on the flight map of top global adventure sport flying destinations, the word is out (and) this is no exaggeration."

This Saturday, Aug. 18 at 11 a.m. the 36.5km Just Another Bike Race gets underway in Squamish, featuring a lot of trails that weren't included in other races, like Angry Midget, Hoods in the Woods and Word of Mouth. The event will also feature the new Legacy Climb, the first time it's been featured on a local bike race.

The complete course is at www.testofmetal.com.

The event gets underway at 11 a.m. at Quest University. Day of race registration is available for $67.20, cash only, until 10 a.m.

The 5 Peaks Trail Running Series returns on Saturday, Aug. 25. Back for more, the Whistler 5 Peaks event takes place in the high alpine with both Sport and Enduro course options available. There's also a one kilometre Children's Challenge.

The event was moved to Blackcomb last year because of the late snowpack, and once again that's been an issue for organizers. However, the course on Blackcomb will be different than last year with more singletrack.

Also coming soon is the Meet Your Maker 50 Mile Trail Ultra and Relay on September 2. This is a tough new race for solos and relay teams, covering 80km of trails in Whistler. The longest section is just under 23km, following the Comfortably Numb trail.

Visit www.meetyourmaker50.com for registration and details.