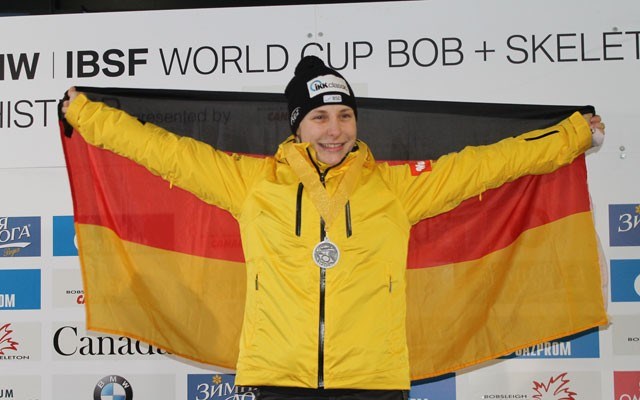 Germany is generally at the forefront of sliding sports, and skeleton athlete Tina Hermann is the latest to pick up the torch.

The 23-year-old picked up her fourth win in six tries this season at Whistler Sliding Centre on Friday, extending her overall lead over teammate Jacqueline Loeller in the World Cup standings.

Hermann trailed American Anne O'Shea by two-hundredths of a second after both posted blistering first runs in rainy conditions. When the skies cleared for the second attempt, Hermann was even quicker, improving from 54.57 seconds to 54.33 seconds. Her combined skeleton time of one minute, 48.90 seconds (1:48.90) was good enough to best O'Shea by 0.19 seconds in the end. Loeller placed third, 0.58 seconds back.

While not entirely satisfied with her first run, Hermann made it up in a big way with her second attempt, as the only blemish kept her from winning by a greater margin.

"The first run was not so good, but it was OK. I don't make such big mistakes," Hermann said. "The second run was really good, but out of corner 16, I crashed and that was my only mistake, I think."

Though Hermann posted strong results in 2014-15, finishing no lower than sixth, she was winless heading into this skeleton season. Faster starts have helped her find the little extra time she needed to climb up a few spots.

This weekend, she enjoyed her first World Cup visit to Whistler.

"It's a great track. It's one I really, really like and the speed is great," she said. "It's also very difficult to run fast."

Sitting in fifth after the first run, Jane Channell of North Vancouver took fourth place, 0.97 seconds off the pace. Though the 27-year-old was just off the podium, she had a little something to celebrate as she set a new record for fastest start at the venue with a 4.84-second blast in her second run. Fellow Canadian Mirela Rahneva held the previous record after setting it last November.

"I felt good. I knew that I had to be explosive off the block. There were a couple technical things that I had to focus from the first start, so I focused on that," Channell said. "I had a good load and it turned into a start record."

Channell explained she wasn't thrilled with how she performed out of the gate in her first attempt, especially early on when given the opportunity to shave precious fractions of a second in the opening transitions.

Channell retained her third-place position in the overall standings with the result, and was pleased to have pulled off the result she did after feeling external pressure and on-track challenges earlier in the week.

"I'm really happy with (the result). I wasn't training well through the official training but it all came together on race day," she said. "(During training) there were some little things that were adding up down the track, so come race day, I was able to fully relax on my sled."