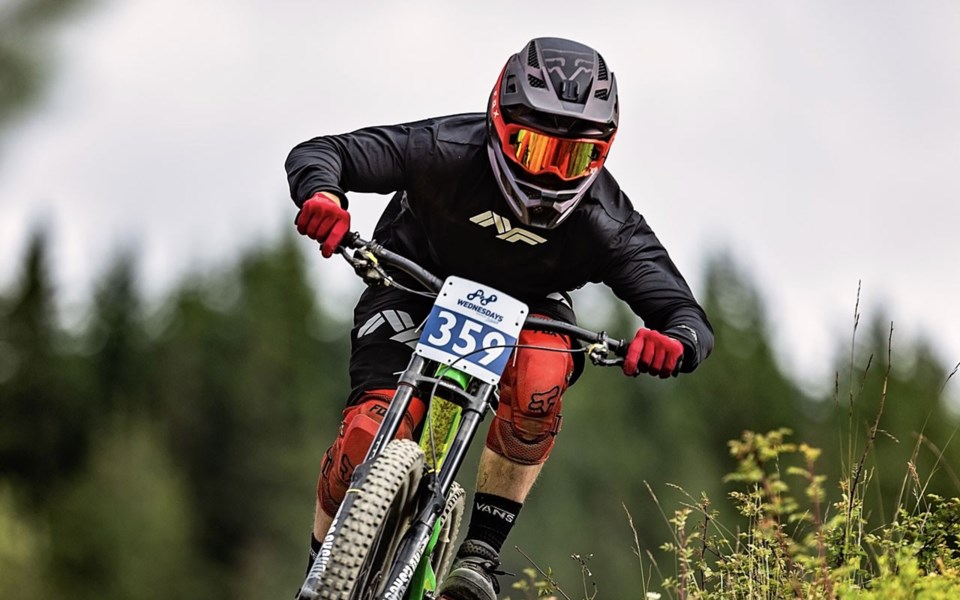 If you've ever doubted the veracity of that ol' chestnut, "It's just like riding a bike," Max Grayston can confirm it.

In just his second year of competitive racing, the 26-year-old went out and won the senior men's category in the second Canada Cup downhill contest of the season at the Silver Star Bike Park on July 14. Grayston nicked runner-up Karl Heldt of Kelowna by 0.29 seconds for the win.

Grayston, who hadn't ridden at Silver Star since taking third in the same event last year, said the course suited his style of riding, especially with a little bit of rain coming in to mix with the dirt.

"It had a little bit of everything. With my style of riding, I liked it ... [There were] a couple of gnarly rock rolls up at the top that were a little bit challenging to hit with speed," he said. "It was almost like two different tracks. The top was a bit more rock, then you get into the bottom half and it goes into the trees and it's a bit of a jungle. There are exposed roots everywhere. It's just a different setting.

"The combo made it quite enjoyable."

Grayston is a relatively recent convert to racing, having only rejoined the mountain biking world since moving to Whistler from Kelowna two years ago.

"Growing up as a little kid, I was mountain biking right up until middle school and then I sold my bikes and stopped cold turkey for about 10 years until I moved back here," he said. "When I moved here, I had to get back into mountain biking."

He's jumped in with a vengeance, trimming nearly five seconds off his 2018 time at Silver Star. But he's noticed even more progress locally, as some of his elite friends used to be 25 seconds up on him—and he's now narrowed that gap to just five.

Grayston said he's not necessarily riding more, but has learned to develop his mental approach by remaining on task when something goes awry in a race.

"Being able to live up in Whistler and racing a Phat Wednesday series, you get to ride basically a practice race midweek," he said. "A huge part of it is mental. Some of my friends that I ride with here, they're keeping up to the same pace, but when they go to ride a race run, they just fall apart.

"This year, I've really been able to focus on that you're not always going to be able to have a perfect run, and being able to remain focused and do the best that you can, that's really helped me out."

Grayston hopes to move into the elite category in the near future, but plans to stay in the amateur division for Crankworx Whistler so he'll remain more competitive.

"It'll be a lot more competitive if I stay in amateur until Crankworx is done instead of fighting for the bottom in the elite [division]," he said.

Tyas has also taken some time off recently after suffering an injury two summers ago. However, with new sponsors in tow, she's back and making a charge.

"It's pretty awesome to get back into racing," said Tyas, who has lived in Whistler on and off for the past five years. "Mentally, it's trying to keep the nerves down, because when you're at the top of the hill going down for a race run, your nerves can take over you sometimes.

"I'm just trying to get back into the process of controlling them, keep cool, and keep that process smooth."