Grizzlies surge past Raiders once again 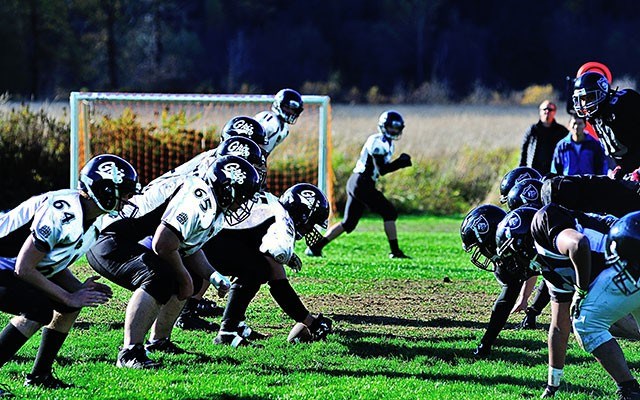 RICHMOND REPEAT The Pemberton Grizzlies wrapped their season on a winning note, knocking off the Richmond Raiders for the second week in a row. FILE PHOTO BY DAVE STEERS

The first description Pemberton Grizzlies head coach John Burleson came up with when describing his team's rematch with the Richmond Raiders: "Groundhog Day."

The line scores from both games look similar — Richmond managed the first eight points and shut out Pemberton in the first quarter once again — but the Grizzlies hit their stride, never looking back.

With a heavy contingent of fans, Burleson said, the Grizzlies were able to navigate their way in hostile territory.

"The boys did well, as far as going on the road," he said. "They did put together another game of four straight quarters and playing to the whistle."

Burleson said all team members played well, but there were several game-changers on defence for Pemberton. Robin Grylka hauled in two interceptions, scored a touchdown, and made five tackles while Ben Thompson made seven tackles and three sacks. On one play, Thompson blocked a pass, made the interception, and returned the ball for a touchdown.

"It was the highlight play of the day," Burleson said.

Offensively, the Grizzlies put up 396 combined yards. Kex Nelson threw for 179 yards and tossed three touchdowns and three interceptions. Nelson also rambled for 143 yards on the ground while Finck added another 87. William Briening made it to the end zone for the first time this year after a Nelson lob, while Reilly Cuttle and Zac Moxley also notched touchdowns.

The game was the final one for several Grizzlies: Graves, Lacsamana, Thompson, Briening, and Finck.

"I don't care if you play at the next level, I don't care if you go win a Super Bowl, or if you're successful off the field in a boardroom, you will always remember your last senior game," he said. "It is the most important game you'll ever play, because the reality is you're not guaranteed to ever put on pads again."

Pemberton will now launch into offseason training. Burleson said the team will be working with Crossfit Whistler in Function Junction, and is inviting other high-school-aged athletes to join the program for $10 a session. The sessions are each Tuesday afternoon from 4 to 5 p.m.

Burleson said the team's fitness was a major contributor to its success. He observed in the Richmond games that though the Raider roster was nearly twice the size of Pemberton's, the Grizzlies' 15 players were able to tirelessly take over the game.