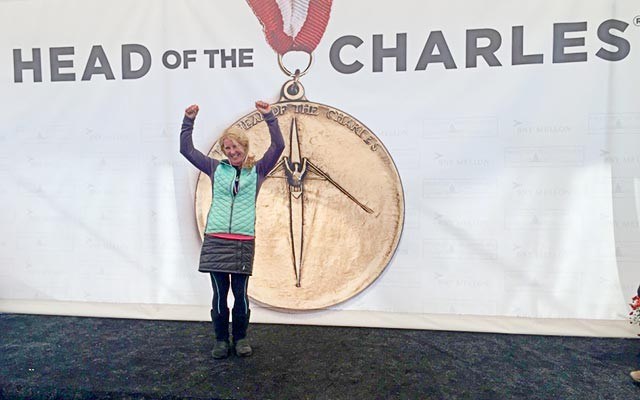 CHARLES CHAMP Maureen Harriman celebrates her victory at the Head of the Charles in Boston on Oct. 17. Photo submitted

This time, Maureen Harriman was second to none.

The local rower has been to the Head of the Charles Regatta in Boston six times before, grasping the silver medal on multiple occasions.

But on Oct. 17, she couldn't be stopped, taking the women's grand master singles race by 12.6 seconds over runner-up Margarita Zezza of Cambridge. New Haven's Mitz Carr ended up 15.6 seconds back after taking a five-second penalty to drop her a spot.

"I was feeling good. I was feeling ready and I was ready to race. It was a long time coming for sure," she said. "It's lucky No. 7.

"I was pretty confident that I could do it. I just haven't been able to do it in the past."

In her bid to capture top spot for the first time, Harriman hunkered down, increasing training with coach Marlene Royle and going down to Boston early to acclimatize herself with the conditions.

"This has been my focus since the day after the race last year," she said. "I was faster and stronger. I also went to Boston a week early. They have a preparatory race (Head of the Kevin) a week before for the locals, so I did that, and then I rowed down the river for the week before without any pressure.

"I thought that was really helpful."

The Head of the Charles, roughly three miles (five kilometres) in length is no ordinary race. The course poses obstacles and twists and turns that can leave even seasoned rowers struggling.

"There are seven bridges that you have to go under, and a lot of curves, so your course does matter," she said. "I was back a bit this year because I had a crash last year so I started sixth rather than in the top two or three positions.

"It's tough maneuvering by the bridges, around the curves by the shortest course possible and stay out of any trouble."

Harriman said the conditions didn't seem favourable on race day, but she gutted it out the best she could on her course to victory.

"There was a really wicked headwind. Headwinds usually are not that favourable to me. I'm not that tall and headwinds usually favour the bigger rowers," she said. "I woke up that morning after we'd looked at the wind all week and it was a very strong headwind. It was a pretty tough race all around, so I was worried that might set me back.

Harriman also explained her positioning a little further back in the pack was a challenge, especially given her challenges in 2014, but she adjusted her strategy and it worked to a tee.

"I also started sixth, so I had to pass a couple of boats and last year I had some difficulties getting by some of the boats at the bridges. On the last curve, I didn't get the inside line that I wanted, but this year I decided not to fight for it and play it safe. I guess it worked out for me," she said.