The 15th annual Squamish Triahtlon: A Memorial for Bob McIntosh got underway with cloudy skies and a lightning warning, delaying the race by about seven minutes while organizers waited for the all-clear — 20 minutes with no thunder or lightning
Jul 18, 2012 9:00 PM By: Andrew Mitchell 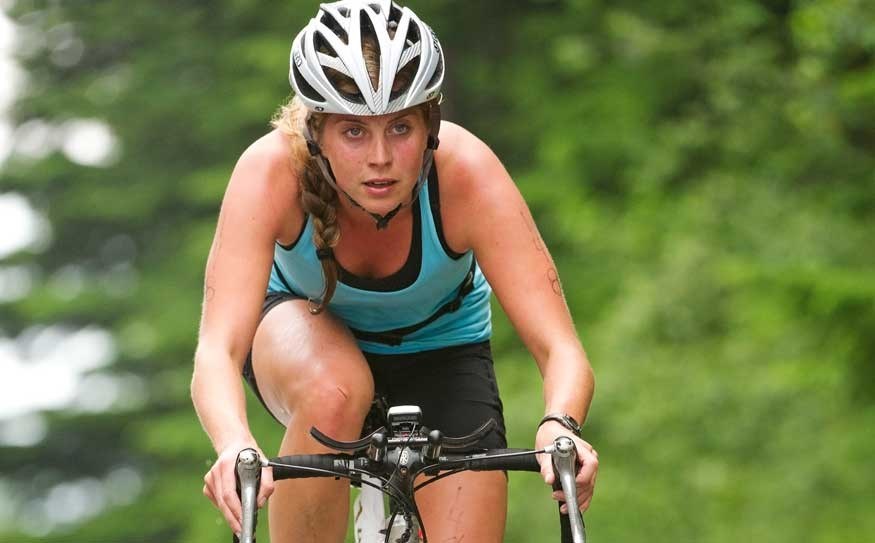 The 15th annual Squamish Triahtlon: A Memorial for Bob McIntosh got underway with cloudy skies and a lightning warning, delaying the race by about seven minutes while organizers waited for the all-clear — 20 minutes with no thunder or lightning.

Squamish's own Brandi Heisterman, who's racing with the national Xterra off-road team this year, flew through the course. She was 15th out of the water, posted the 11th-fastest bike leg and finished up eighth on the run to place 10th overall out of 160 finishers and first among female racers with a time of 2:11:49. She also won her age group, women's 35 to 39, by 24 minutes.

Heisterman, who is specializing in off-road triathlons, enjoyed the race more than she expected and was especially pleased with her time on the run.

"I had a great run, I don't know what happened," she laughed. "I felt good. I think it's because I didn't pin it as hard on the bike like I do in the Xterra events where the mountain bike is a lot more taking, so maybe I had more energy for the run. All I know is I got to the transition and my legs weren't blown."

Heisterman was sitting in second after the bike leg, and passed Jessica Kissel at the start of the run leg.

"The girl that came second also had a good run," said Heisterman. "I caught her at the beginning of the run and I could see her at the turnaround for both laps, so yeah, I was running scared. I didn't know what she had left in the tank and these young girls are so fast."

Heisterman earned $900 on the day — $500 for placing first and $400 from the Garibaldi Veterinary Hospital as the top female.

In the men's competition there was a bit of a controversy after Calgary's Stephen Hastings crossed the centre line during the bike leg. At the time there was no oncoming traffic and he was stuck behind a group of four riders, and made the call to pass on the outside. The pass got noticed by Triathlon BC officials that threatened to add two minutes of penalty time to his bike leg, which would have bumped him back to second. However, after reviewing the incident there was no penalty and Hastings chip time of 1:59:41 was allowed to stand. Hastings was first out of the water, the only swimmer to break the 20-minute mark on the 1,500-metre course in 19:21. He was third on the bike and fifth on the run.

Jeffrey Manson of Richmond placed second overall — and second to Hastings in the men's 25 to 29 age category — with his time of 2:01:18. He was over three minutes back of Hastings after the swim, but posted the fastest times on the bike and run. Sean Clark of Maple Ridge was third overall and first in men's 40 to 44 in 2:03:17.

Other strong local results include:

Only racers in the top 50 or on the podium were included. Complete results are online at ww.raceheadquarters.com.

The Squamish Triathlon is an Olympic distance race that gets underway with a 1,500-metre swim, followed by a 37km bike and a 10km trail run on the Cheekeye Fan trails in Brackendale. You could race solo or as part of a relay team.

In the relay, Whistler-based Bill's Bandits — Bob Deeks, Paul Nicholas and Aoibhe Gwynn — finished first in 2:21:50. Blownaway, from Squamish, were second in 2:27:13, followed by Vancouver's Better Late Than Never in 2:29:02.