Coming off injury, Whistler skier has little time to make a case for Olympic team
Dec 11, 2013 8:00 PM By: Eric MacKenzie 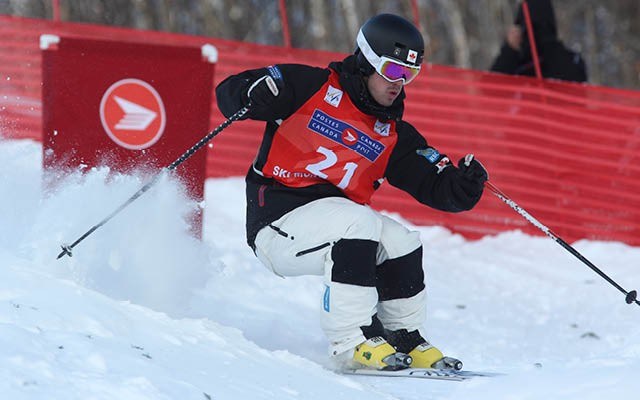 Back at it Eddie Hicks, seen here competing during the 2011-12 season, is back with the Canadian moguls team after missing nearly all of last season to injury. Photo by Mike Ridewood / Courtesy of CFSA

Last winter was supposed to be Eddie Hicks's time to break out.

The Whistler mogul skier was as healthy as he'd been in a long time and had finished off the 2011-12 campaign with some of the best World Cup results of his career, despite spending much of that season battling back pain.

With nine top-10 finishes on the circuit, but still in search of his first podium, the Langley native appeared ready to push into the top three — and put his name into the Olympic team discussion — as the 2012-13 season was about to kick off at Ruka, Finland.

But everything changed with one ugly crash.

"I felt like I was skiing at a level I'd never skied at before coming into last season," said the 25-year-old. "I was (thinking), 'OK, this is for sure going to be a better season than I've ever had before.'

"And then, boom — first day of official training, injured."

Skiing the Ruka course just two days before the first World Cup event, Hicks tumbled down the hill and went shoulder-first into a mogul, dislocating it.

Add to that a cracked humerus and a sprained ankle and his entire year was basically wiped out.

"I've never had a crash like that before," he said. "It was pretty savage."

The 2011 Nor-Am Cup Grand Prix winner didn't compete again until March, spending most of his winter rehabbing at home in Whistler and coaching youth athletes through the Whistler Blackcomb Freestyle Ski Club.

"Last winter, I really took a step away from the sport mentally. I was studying and doing school, hanging out in town, having, friends and a social life — it was crazy," he laughed. "It was kind of like a normal life.

"I didn't really want to think about what was going on or how much fun (my teammates) were probably having on the road, or all the cool things they were doing and seeing."

But Hicks is back with the rest of the Canadian moguls team as it prepares to begin the Olympic year at Ruka again, the first race scheduled for Saturday, Dec. 14.

Hicks had finished the 2011-12 season 10th in the World Cup standings; the fifth-ranked Canadian skier. While he expects to be a little bit rusty upon his return, the lone B.C. guy on the men's national team has performed well in offseason training, and is looking to get back to the mistake-free skiing that helped him to strong results in his last full season.

But there's not much time for Hicks to recapture that form if he wants to be representing Canada at the Sochi Games. Last year's injuries spoiled his chance at early Olympic qualification.

Now, he'll likely need to post some career-best results in a hurry if he wants to be in Russia this February.

"I just don't have any time to waste, but... I really just want to focus on one race at a time, get back in the groove of competition and get one result," he said.

"It's going to take a few results to go, but it has to start with one."

The competition within the Canadian team to earn a spot in Sochi is intense. The strength of the squad versus the maximum four quota spots means Canada will have to leave legitimate medal threats at home for the Olympics.

"If you want to qualify for the men's moguls team you've gotta have podiums, or you're going home," said Hicks. "Then you see guys from other countries who are like, 'Man, I've just gotta get a top 30 to qualify.'

"For sure, it's frustrating."