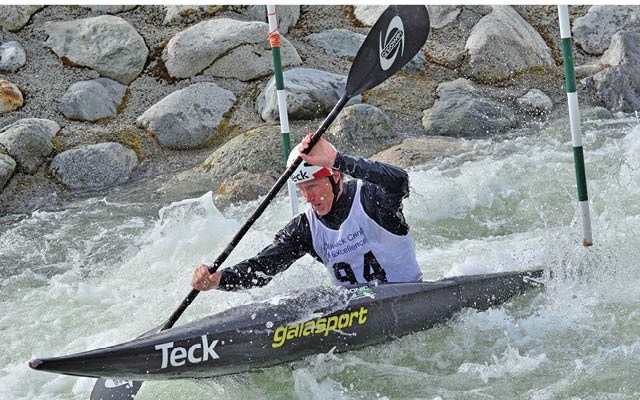 the kayaks are back Five-time Olympian and former K1 slalom world champion David Ford navigates the course at the Rutherford Whitewater Park during the national team's stop at the facility last week, its first visit in four years. photo by rob fletcher / rfort fotos

For the first time in years, the Rutherford Whitewater Park was back in use this past weekend, and multiple stakeholders are hopeful that's just the start of increased activity at the facility going forward.

CanoeKayak Canada (CKC) held its national slalom team trials on the Rutherford course on Saturday and Sunday, May 17 and 18, following several days of training. Neither CKC or CanoeKayak B.C. had made use of the run since 2010, and officials from both groups said they were thrilled to be back at the course located halfway between Whistler and Pemberton at the Innergex-owned hydro station on Highway 99.

"It's great to be back out here," said James Cartwright, slalom high performance manager for CKC, during final training sessions on Friday, May 16. "Just seeing the smiles on the faces of all the athletes, (you can really tell) they enjoy it here."

CKC holds its national team trials on a rotation of four slalom courses across Canada, so this past weekend's return was on schedule. But that also meant that even some veteran athletes were paddling the artificial course for the first time.

"This is my first time here, and it's just heaven on Earth," said Haley Daniels. "It's an awesome course... and if we could train here all year, our results would be awesome."

But one major reason why the park has been seldom used is due to its level of difficulty.

"This is a higher-end use facility, so it's fine for us to select our senior world championship team here because this is going to give us the best challenge," said Cartwright, a three-time Olympian during his racing career. "We don't have anything anywhere near as good as this in Canada, so it's a real gem from that standpoint.

"But if you're trying to build the sport and build participation, this isn't the venue you would choose."

The evidence of the course's difficulty could be seen on Daniels's hands — she had torn the skin off her knuckles earlier in the week when bumping into the "corrugated" sides of the run.

Rob Fletcher of CanoeKayak B.C. said the venue hasn't been used at the provincial level due to first aid concerns, and because events like a B.C. Championship are designed to encourage as much participation as possible.

David Ford, a five-time Olympian and the 1999 men's K1 world champion, said the Rutherford run reminds him of the course built in Beijing for the 2008 Summer Games — great for the world's best, but unusable by athletes still developing their skills.

"That's kind of what this is — it's even a little bit too hard for what we want to do at a World Cup level," Ford said as he wrapped up training on Friday. "It would be awesome if they could scale it to a point where it was usable by everyone.

"When we have a course that's not quite this hard, you can set the gates to challenge the athletes, rather than the river. So we'd love to see something that's scaled back a bit."

That's where some possible synergy exists with Surf Pemberton, the local group that has spent the past several months working towards establishing a standing-wave surf park at the venue. Surf Pemberton president Tyler Kraushar got a chance to meet with CKC officials last week and said discussions were positive. The group is continuing to fundraise to go ahead with its plans, but Kraushar said he's hopeful to work with the canoe-kayak bodies as they look to invest in the facility and complete some concrete work on the slalom course as well.

"Long term, hopefully they'll be able to help us with the funding challenges," said Kraushar.

"Our goal is to be the community stewards of the site, and make it actually get used by multiple user groups."

Cartwright said CKC is excited about Surf Pemberton's plans, particularly as they would have no impact on the slalom course. The proposal from the surf group calls for a standing wave to be built below the course's finish line. He's also hopeful all stakeholders can work together to make the facility suit everyone's needs.

"It is going to take quite a bit of money to get this thing to where it needs to be so that we can open up the usage, but the potential is enormous," said Cartwright, adding that CKC has taken notice of the success the Pemberton Canoe Club has had in flatwater racing over the years, so there's already a pool of paddling talent to draw from in the area to begin developing whitewater racers locally.

Even if plans to alter the current facility don't move along rapidly, it won't be another four years until the water gets turned on again. Cartwright said the national team would be back in 2015 for a training camp before next year's Canadian and world championships.

FORD ON TOP IN SELECTION RACES

Rosters for Canada's canoe and kayak teams headed to World Cup and world championship races in 2014 were decided after four selection races over Saturday and Sunday.

Ford returned to the men's K1 senior elite team thanks to three strong finishes over the weekend, and will be joined by Edmonton's Ben Hayward and Ottawa's Michael Tayler. C1 athletes Cameron Smedley and Alexandra McGee also made the senior elite team, which will race the first three World Cups of the year in Europe starting in June.

Women's K1 competitors Jazmyne Denhollander, Jessica Groeneveld and Thea Froehlich were all named to the senior A team, which will join the senior elite team at the fourth and fifth World Cup stops of the season, as well as at the world championships in Maryland in September.