Iles and Cankovic hitting a crest 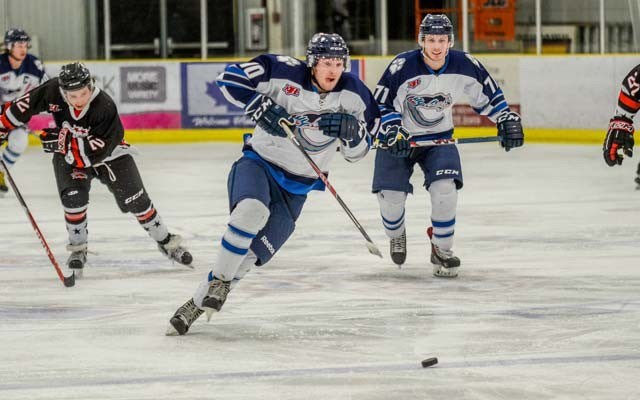 The Creston Valley Thunder Cats have had a lightning-quick start to the season.

The Kootenay International Junior Hockey League team has a pair of Whistlerites leading the way, with Grant Iles and Thomas Cankovic each having tallied 15 points to sit tied for fourth on the team in scoring.

And the team has enjoyed success as a group as well, with a 12-1-2 record to start the campaign, sitting tied with the Kimberley Dynamiters atop the Eddie Mountain Division.

Iles, 20, is no stranger to team success, having played with strong squads in the Vancouver Island league with the Comox Valley Glacier Kings, who traded him to the Interior last season.

"I think it's great. Obviously, with this start, it's just a start and we want to, hopefully, end up winning a championship," Iles said. "It's been going pretty good. Our forward group is pretty deep this year, so I'm playing with some really good linemates and that helps a lot, for sure."

Iles is skating with set-up man Liam Plunkett and Brodie Smith, explaining the trio meshed quickly in the two games they had together last weekend.

"We like to play fast and use our speed," he said. "We go to the corners where it gets kind of messy. We put it in however it works."

Cankovic, meanwhile, has lined up with a number of different players as part of a mix-and-match approach. The 19-year-old got off to a blazing start to the year and was a finalist for the Kootenay Conference player of the month for September after tallying 10 points in seven games. He went through a little lull before busting out with two goals and an assist Saturday night against Nelson.

"I've been on different lines throughout the year. I've been moving around quite a bit... It's been shuffled quite a bit," he said. "We don't really have a first, second, third or fourth line. We basically have four first lines whatever line you're on. You're playing with good players."

Like Iles, Cankovic was acquired midseason last year, but from within the KIJHL, moving from the scuffling Princeton Posse to a solid Thunder Cats team. Both appreciated the chance to have a full training camp with the team and start the season from the very beginning with them, but Cankovic also expressed gratitude at being able to settle in socially as well.

"I definitely have some close friends here now whereas last year, I was kind of being the new guy," he said.

While Creston Valley experienced its share of turnover, returning only a handful of players from 2015-16, Iles said the ones who remained and the ones who were brought in should provide the squad with a strong opportunity to capture its first league championship.

"The guys that we've traded for just fit in really well and have the same goals as the rest of the veteran group has," he said. "The rest of the rookies are onboard for what we've got to do. We'll do whatever it takes.

"I think the sky's the limit with the guys we have," he added.