Telus World Ski and Snowboard Festival lays down the gauntlet
Apr 16, 2010 9:43 AM By: Andrew Mitchell 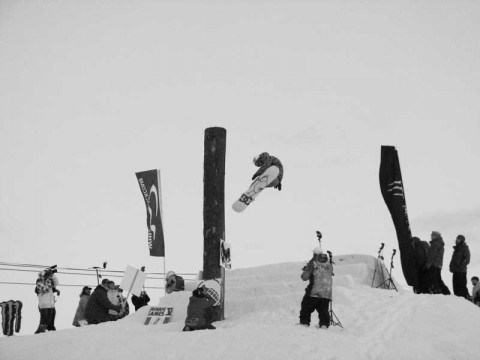 The Telus World Ski and Snowboard Festival has seen a lot of the world's top skiers and snowboarders pass through over the years, launching some careers while capping others. And while sponsors and formats have changed time and time again, the atmosphere is always the same as athletes converge on Whistler to celebrate the end of the season by going skiing or riding with their friends - awesome.

The prize money this year is huge, even by past standards. There is $50,000 in cash and prizes up for grabs in the World Skiing Invitational, which will be handed out in big cheque form following the Superpipe and Superhit competitions. There is also a one in four chance that the top male and female skier on the Olympic-sized halfpipe could drive away from the festival in a brand new Camaro. If you catch one live sporting event this year (Olympics not included) it should be this one.

This is the third year that Whistler has played host to the Orage Masters, a ski industry showdown between factory teams where costumes matter as much as the skiing - and the skiing is beyond phenomenal.

While the event has typically occurred up the mountain, out of sight of the general public, the organizers have brought it down to the valley this year to a custom-built course at the base of Whistler Mountain - a course that will be shared with the Grenade Games the following week. Finally the athletes will be able to show the world what they're doing these days.

The event is judged by the athletes themselves as well as a panel from Orage. It takes the form of a head-to-head showdown between eight teams in an elimination format until just two teams remain. Teams represented include Amplid, Armada, K2, Line, Salomon, Surface, Volkl and 4Front. Volki is the defending champion.

Local skier Sean Pettit is in the field again this year competing for the K2 team.

The competition gets underway with the first heats at 1:15 p.m. and runs through the afternoon until the finals take place around 4:40 p.m. and the final vote is tallied. The awards follow at 5:30 p.m. on the main stage.

The Telus World Ski and Snowboard Festival practically invented the freeskiing revolution, hosting some of the earliest slopestyles, quarterpipes and halfpipe competitions in the world. Anyone who is big in the industry, from Tanner Hall to Mike Douglas, has competed at the festival, even before they had their own World Skiing Invitational banner to rally under.

This year the organizers of the WSI opted to skip out on the usual big air contest because Whistler basically hosted three weeks of Big Air events during the 2010 Winter Games, and because of the decision to host the Orage Masters at the base of the mountain this year.

But while there is one fewer event this year the prize purse is about the same as last year, with the entire $50,000 in cash and prizing up for grabs at the Superpipe and Superhit competitions.

A lot of exciting things have happened in the 15-year history of the World Ski and Snowboard Festival, but the decision by Danny Kass to move the Grenade Games here last season takes first prize in the snowboarding category.

This is the least serious event you will ever see, but still manages to push the boundaries every time.

There are four events in the Grenade Games. Three of which are more or less open to the public.

The first event is the Search and Recovery Mission, and on-mountain treasure hunt that runs all day on Wednesday, April 21, 9 a.m. - 4 p.m. There are five different on-mountain challenges, starting with a run at the GMC Race Centre on Blackcomb. The top 40 timed riders will advance to the Dual Slalom moguls competition the next day where they will face the top riders from last year. Other tests are on the Green Chair Flats, on Easy Out above Catskinner, the Whistler Terrain Park and at the Longhorn.

Athletes who complete all the tests will receive an invitation to the final mission at the Longhorn, which gets underway at 4:30 p.m. Last year it was a poker tournament with a very expensive watch as first prize.

Riders will go head to head and the fastest riders will wait in the hot seat until all the boarders have been through the course before facing off in a head-to-head final. Riders can make as many runs as they want in the two-hour jam, which runs from noon to 2 p.m. The event will wrap up at 3 p.m.

There will be live entertainment for the riders by DJ Vinyl Ritchie, with Monster supplying the energy drinks.

Next up is the Superpipe, which will take place on an Olympic-size course using the Olympic pipe cutter. The event is wide open and the format is an open jam session starting at 11 a.m. After the first jam riders will be tapped to enter the final, and then eliminated one by one until the winner is declared.

The last event is the invite-only Grande Finale at the base of Whistler Mountain. This is basically a short slopestyle course with some unique and bigger than normal features. Athletes can qualify during the other Grenade Games events by showing that they have what it takes.

The practice takes place from 3 p.m. to 5 p.m., followed by the contest itself from 8 p.m. to 10 p.m. There will be cash and prizes for the top athletes.

To make things a little more interesting this year, athletes can volunteer to be lab rats as well as action sports stars. During the TWSSF, UBC researcher Cynthia Thompson is conducting a study on whether skiers and riders are genetically predisposed to high-risk, thrill-seeking sports. If athletes agree she will take saliva samples during the competitions, which she will use to determine if there is a genetic imperative. She has taken samples from skiers, snowboarders, BASE jumpers, paragliders, mountain bikers and others. She wants to explore whether adventure-based sports have potential for treating individuals with substance abuse, which is also a high-risk behaviour.

All she needs from athletes is a swab of saliva and answers to a short questionnaire.