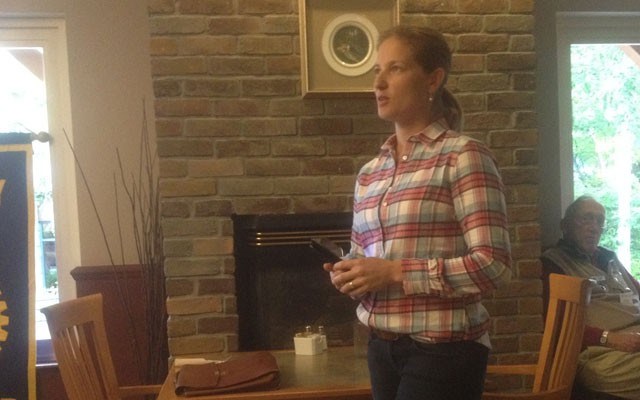 back in town Britt Janyk speaks to the Rotary Club of Whistler on Sept. 15. Photo by Dan Falloon

As a ski racer, Britt Janyk has been on the road for essentially half her life.

Though she retired in 2011, the 35-year-old has only recently settled back down in Whistler full-time after husband Mark Tilston was named executive director of the Whistler Mountain Ski Club (WMSC) this spring.

Before that, the family split time between Whistler, Tilston's homeland of Scotland, and France, where Tilston coached the Spanish team.

Now that she is settling back into her hometown with her family, including three-year-old Nina and nine-month-old Tiree, Janyk took some time to brief the Rotary Club of Whistler Sept.15 about how she now views her racing career in hindsight, and what she's doing now.

"It's been fun and different (to settle back in)," she said in an interview after the meeting. "I'm rediscovering a new community, but it's still the same community that I remember, if that makes sense. I'm a different person coming into the community since retiring.

"But I see so many familiar faces and so many people that know me and that inspires me to continue on my journey. I'm excited and I'm looking forward to raising my family here."

Janyk has appreciated some regularity in her schedule, as the past four years have seen a little less permanence, in some ways, than when she was competing.

"It's been four months in one place. I haven't done that since I stopped racing," she said. "It's interesting. It's nice to have a routine."

After rising through the NorAm and Europa Cup ranks, Janyk hit the World Cup level. She took part in five World Championships, first attending in 1999. She hit the top 10 on 28 different occasions and won one World Cup downhill in Aspen, Colo. in 2007. Her only Olympics were on home soil in 2010, where she placed sixth in the downhill.

"There are some absolutely fantastic results throughout my career, but at the time I retired, I looked back and I saw a lot of failures. I saw a lot of struggles, because there were a lot of struggles," she told the club. "If I base my career on how we perceive success, and how we look at success in sports, you win or you lose. I won one World Cup (race) and to me, my goal all those years was to win World Cups and to win World Championships and to win the Olympic Games. I had one successful moment."

Janyk acknowledged it took her awhile after retirement to reconcile her struggles with the successes she enjoyed, but ultimately made the connection that three of her most strenuous seasons preceded her most successful one, where she finished third overall in the World Cup downhill standings in 2008. She credited taking up golf — and the ups and downs inherent in it — with giving her new perspective on her racing career.

"It's important to know what failure is," she said. "My goal was to win at the top level and it took a long time to do that. There were certain points in my career where finishing top 10 was a successful day. I'd come from finishing 30th and now all of a sudden I had a top 10. But my goal the whole time was always to get right to the top.

"As far as saying 'Did I have a fairly unproductive career?' (the answer is) 'Absolutely not.' But there was that feeling when I retired that I didn't win as much as I wanted to."

When considering retirement, Janyk vascillated between the two options before making up her mind.

"I came to the decision I wanted to retire and the most difficult thing was just to say it out loud. I think I had known for the whole six weeks of going back-and-forth," she said.

These days, Janyk is working at the Peak Performance store in Whistler Village and will coach WMSC's U12 skiers, hoping to pass along lessons from her career to the next generation. She hopes to help create the same passion for skiing that fuelled her on the mountain.

"What I've been trying to learn is to not look back on it with regret. I see where I could have done things differently, mostly in my failures, how I could have managed them better and moved forward from them," Janyk said after the meeting. "I can carry that through into my current life, my next career and pass them onto my children as lessons.

"I can sit back and see where I could have done better, but I don't regret that I did it the way I did."