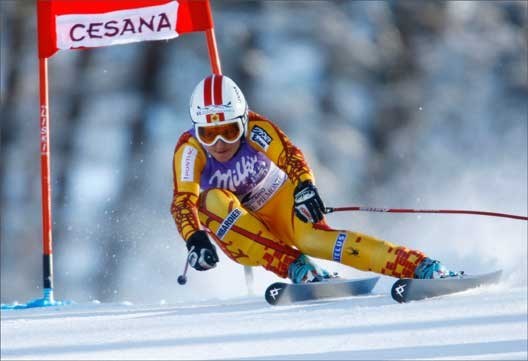 It was a good weekend for Whistler on the World Cup circuit, with Britt and Michael Janyk leading the way for the Canadian Alpine Ski Team in their respective events.

Following an accelerated schedule due to the number of World Cup events affected by the lack of snow, the women’s speed team spent a busy weekend in San Sicario, Italy with a super G, downhill and another super G in just three days.

Britt Janyk led the way in the first super G on Friday, placing fourth and missing her first World Cup podium by three one-hundredths of a second. As it was fourth was her best career result, after a fifth place in giant slalom in 2003.

“I was in the leader booth from very early in the race, and kept seeing the best in the world go by over my time,” she said. “I almost saw myself on the podium, but a fourth place is not that bad at all.”

This season, Britt was bumped back from the national team to the development team following three difficult years on the technical circuit. That demotion meant she had to pay Alpine Canada $25,000 to be able to train and compete with the national team. And, boosted by strong results at last year’s nationals in the speed disciplines, Janyk gambled with a switch to the speed squad.

All those questions at the start of the season now seem to have been answered. Her fourth place finish at San Sicario qualified her for the Alpine World Championships, in super G and downhill. It also means Alpine Canada will refund 80 per cent of her training fee.

While she has yet to podium, Janyk has been very consistent in speed events this season. Leading up to her fourth place finish on Friday, Janyk has placed in the top-30 nine times, or in all but two events.

Boosting the team, Kelly VanderBeek of Chilliwack placed fifth, just one-one hundredth of a second back of Janyk.

“It wasn’t a perfect run but it was a pretty good run,” said VanderBeek. “I was so pumped for Britt. I knew she was right on top so it motivated me to push even more.”

VanderBeek was fourth in the Olympic super G last year at San Sicario, missing the podium by one one-hundredth of a second.

Friday’s win went to Renate Goetschl of Austria, followed by Lindsey Kildow of the U.S. Austria’s Christine Sponring, one of the last skiers on course, bumped Janyk out of the bronze medal position.

In Saturday’s downhill, VanderBeek was the fastest Canadian in 13 th place, while Janyk placed 20 th . Goetschl picked up her second gold of the weekend, followed by teammates Elisabeth Goergl and Maria Holaus.

In the second super G on Sunday, Janyk proved that Friday’s result was no fluke with her second fourth place finish — this time missing the podium by just 0.28 seconds.

“I’m definitely feeling pretty good,” she said. “I’m fourth and of course I would have liked to have been on the podium but the fact that I’ve had two fourth place finishes on the weekend tells me that the podium is within my reach and that’s a great feeling.

“Now that I’m fourth I can see more and more that it’s attainable to be on the podium.”

With the points she earned on the weekend Janyk climbed to sixth overall in the World Cup SG rankings, as well as 28 th on the DH rankings. She is also 22 nd in the Combined standings.

VanderBeek and Genevieve Simard also cracked the top-30 Sunday, finishing 10 th and 29 th respectively though they were separated by just 1.11 seconds.

While Britt was earning points in Italy, her younger brother Michael was leading the men’s technical team at Kitzbuhel, Austria.

In Saturday’s slalom he was the lone Canadian to qualify for a second run, finishing his day in ninth place.

“It was another solid result,” he said. “I am happy with my skiing. I went all out and made some mistakes, but you have to do that if you want to be on that podium.”

Mike is now ranked fifth in the slalom standings, buoyed by a silver medal performance in Beaver Creek earlier this year. He has also been the most consistent member of the technical team, with three top-10 results to his credit leading up to the events in Kitzbuhel.

This was the first race where Janyk featured the Resort Municipality of Whistler logo on his helmet, after announcing a sponsorship deal with his hometown last week.

He also used his ninth place result to give kudos to his sister, one day after her first fourth place finish.

“She worked very hard in the summer, and it’s good to have her back in the game,” he said. “She is one of the hardest working girls on the circuit and she’ll podium sooner than later.”

Jens Byggmark of Sweden took the gold medal, while Mario Matt of Austria picked up the silver and Alois Vogl of Germany claimed bronze.

In a second slalom, on Sunday, Janyk again qualified in the top-30 for a second run, but ended up with a DNF after straddling a gate close to the finish line. He was on pace to crack the top-10 once again.

Mike shrugged off the incident. “You can’t really think about straddling that gate. It happens so quickly. If you want to win, you’ve got to ski on the edge. You take chances. Sometimes it pays off, sometimes it doesn’t. It’s always better to come once on a podium than twice in the 10 th position.”

Byggmark picked up his second gold of the weekend, and Matt his second silver. Italy’s Manfred Moelgg took the bronze.

For the next two weekends the Canadians who qualified will be at the FIS Alpine World Championships in Are, Sweden.