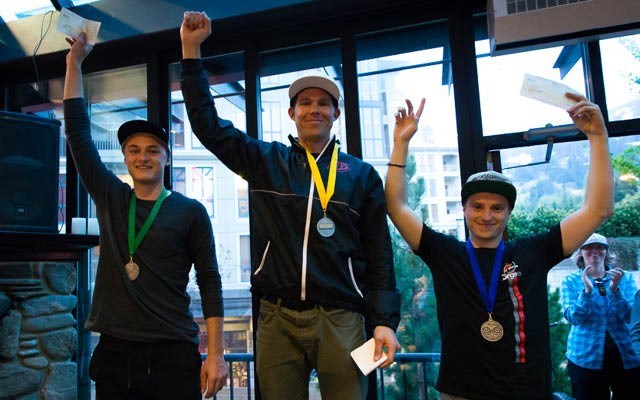 The race was short, but the spoils were sweet for Curtis Keene and Sarah Leishman in the GO Enduro on Friday, May 16, which kicked off a busy weekend of sports events around Whistler for the inaugural Great Outdoors Festival.

Keene, who also took home $750 for the victory, finished first on the final two stages to clock a winning time of 10 minutes, 48.761 seconds. Whistler's Nick Geddes, who won Stage 1, finished in the runner-up spot at 10:57.656, while fellow local Jesse Melamed was less than a second behind in third spot. Dylan Wolsky missed the podium by just three seconds, settling for fourth.

Leishman, who described the short course as a "sprint enduro," finished the three stages in 12:19.873, holding off Whistler's Katrina Strand by 10 seconds for the women's title. Carrie Meltzer placed third.

"Katrina is really fit this year, so I was surprised it worked out," said Leishman, who earned a top prize of $250. "(The course) was a pretty challenging, pretty physical three stages, but it was still fun."

Chris Dewar swept all three stages in the master men's race, winning with a combined time of 11:35.442. Josh Lyons was 28 seconds back in the runner-up spot, and Chris Young finished third. Bowen Irvine (12:54.789) was the lone junior competitor.

Meanwhile, the Sea to Sky Enduro Series continued the day after in Pemberton. See Sports Briefs on Page 54 for details.

Read on for the rest of the final results from GO Fest sports events from this past weekend.

Team Prestige Worldwide paddled its way to top spot in the Great Green River Challenge on Saturday, May 17, emerging as the winner after a rafting pentathlon that featured a flatwater sprint, mass start race and time trial, plus a raft flip and sumo wrestling competition.

Michelle Wilson (158) won the pro women's event, while Bradness Henderson beat Bill Anderson on the first playoff hole after both tied for first in the pro masters category at 160.

Sticking with discs, Toolbox, from Seattle, was the winning team in the two-day Whistler 5-on-5 Ultimate Frisbee Tournament that wrapped up Sunday, May 18.

Barbara Walker and David Stein were the overall winners of the GO Ski to Sail Regatta hosted by the Whistler Sailing Association on Saturday.

Walker and Stein placed third in the ski scavenger hunt, but won both sailing races to take top spot.

Skylar and Phil Beauregard were the top family team, while Mark, Erin and Anika Husken won the ski event.

—with files from Brandon Barrett