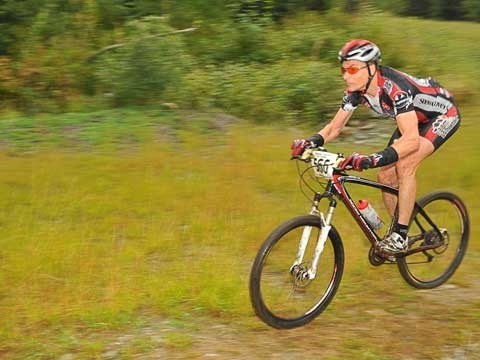 The rain held off for most of the 2010 Cheakamus Challenge, and some of the slower riders even saw some sun on the way to the finish line. While there were puddles they were smaller than last year, and overall riders said the conditions were good.

The conditions didn't stop more than 200 riders from racing on Saturday, either in the full 70 km race from Squamish to Whistler, or the short 40 km "lite" version that joined the race in progress at the Calcheak area.

Squamish's Neal Kindree was first to the finish line in 3:05:33, averaging over 22 km/h on the course.

Kindree was near the lead the entire race but said it was a strange race and that riders had to work together sometimes.

"It was a bit of a mix, the lead group wasn't consistent throughout," he said. "Out of the (Cheakamus) Canyon there were two of us, but going along the highway there was a headwind, which is kind of unusual for Sea to Sky, so we were trying to keep a group together and work together. At one point there were probably 10 people in that group."

The lead group kept changing until the end, said Kindree.

"I opened up a gap on Tunnel Vision with probably 15 seconds, but I was on a hardtail and a guy caught me and chased me on his dual suspension. I got away again on the Kadenwood climb, then rode sort of dangerously down to the finish - maybe a little too fast, but I didn't crash so everything worked out okay."

Kindree was one of the top young riders in Canada until he was sidelined in 2008 with a knee injury. The Cheakamus Challenge was the only race he did in 2009, and so far in 2010 he's done a half-dozen races - finishing on the podium in most of them.

He didn't come into the Cheakamus Challenge with any expectations, but was waiting to see who would show up to challenge for the title.

"For me it's just racing," he said. "I wasn't expecting to win, but none of the World Cup guys showed up and it was up for grabs.

"My knee was better than last summer - it's still a problem, so I don't know how serious I'll be next year and take it as it comes. Last year I did my first race in a long time and this year I've done five or six and it's gone pretty well. I'll keep working my way back on a slow pace and hopefully next year will be better than this year."

Heisterman said she wound up with a group of guys at the beginning, including Eric Crowe and Carl Goldstraw.

"It only rained near the very end and the conditions were actually super," said Heisterman. "Tunnel Vision was awesome, the rock was in great shape and easy to ride, and Big Timber was super fun - those trails were the highlight of the day, the most fun of all the singletrack."

Heisterman also raced the GranFondo the previous week, but said she was feeling pretty good at the start of the Cheakamus Challenge.

"I figured I'd be recovering but I went for a ride the day before and felt really good," she said. "I was just hoping to get to Brandywine and still feel good, but I felt fantastic the whole day and kept trying to pick off the guys and chase Eric Crowe down."

Heisterman says she will take a break after a long season of racing, but will likely compete in the low-key G.K. Ripper in Squamish to finish her season. She will do the hill climb from Quest University to the Diamond Head parking lot and Lauren Rosser will do the downhill portion.

Overall, Heisterman says she has had a good season, returning to racing after taking a few years to start a family.

"I didn't know how I was going to do, and so far everything has really exceeded my expectations," she said. "Cathy (Zeglinski and the Northlands Medical Clinic) really supported me, and the team - they helped me to get out to races, put clothes on my back and helped out in other ways, so it was great."

There was a slightly different course on display this year. Trash was left off the route once again and the top section of Riverside was cut out. As well, the bottom section of Tunnel Vision was added to the route to lengthen the singletrack, which also added a little more to the climb up Kadenwood.

Next year there could be some additional challenges as the Sea to Sky Trail construction continues, according to race director Grant Lamont.