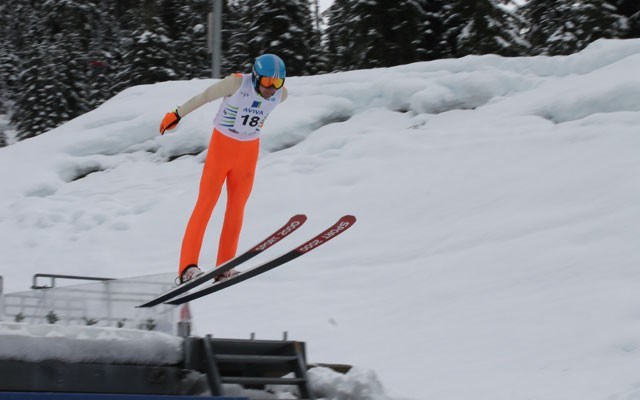 Though they had three attempts, competitors never caught Jakub Kot.

The Polish ski jumper won the both FIS Cup events at Whistler Olympic Park and in addition to Saturday's win in the Canadian National Championships, took all three open men's gold medals on Feb. 6 and 7.

The results marked the 26-year-old's first time on the FIS Cup podium since 2010 and his first win on the circuit since 2009. The results helped him rocket to sixth place in the FIS Cup standings, though German Danny Queck still holds a significant lead over all challengers.

"It was a perfect weekend for me. I'm happy to be here for the first time and I hope it's not the last time," Kot said. "Jumping was good. The hill was well prepared."

Kot was thrilled to be back on top of the podium not just once, but three times.

"It's a special feeling. It's important to be the best," he said.

Though he was the only jumper to break the 100-metre mark on the weekend, Kot acknowledged he'd have liked a little more consistency in his jumps, especially on Sunday.

"It was good, but not the best. The first jump could be better but final jump was better and final result was OK," he said. "I'm just happy because I know that I'm the best. I know it was maybe just 18 jumpers, so not like in Europe but (a) win is (a) win."

Next up is a competition in Eau Claire, Wis. this weekend and Kot said he'll bring plenty of confidence to the proceedings.

"I'm jumping good. I know I'm in good shape. To repeat will be difficult, but I'll do my best to be on the podium and once again in first," he said.

In the opener, Kot posted a winning score of 247 points to easily best Brown and Maurer.

In the Canadian National Championships, he stepped it up, notching a 257 and surpassing 100 metres on both attempts to knock off a pair of Norwegians, Knut Jokerud Strand and Skinnes. Maurer placed fourth.

Kot enjoyed his first trip to Whistler and felt prepared to fly from the get-go.

Maurer, meanwhile, had an up-and-down day, as he was generally pleased with his skiing, though he'd like a do-over on his last flight of the day.

"In FIS Cup this morning, I did pretty good, and then this last competition, the last jump wasn't very good," he said. "I took off too early, so I finished in a weird place. It didn't fly right."

Maurer's home course is in Calgary, meanwhile, is from a different era of the sport and provides a bit different feel to training. Still, he's comfortable in Whistler as well.

"I've gotten a lot jumps here over the last five years," he said. "Calgary's flies a lot higher because it's from the '80s.

"You just have to fly a little bit different depending on the hill and the wind."

In the women's division, Eleora Hamming captured the title with a score of 197.5 to best Natasha Bodnarchuk and Abigail Strate. All five competitors represented the Altius Ski Club in Calgary.

"It's a really tight competition between us. We're always pushing each other to do better. The team really drives you to do better all the time," the 16-year-old said, adding she's been coming to Whistler for four winters.

"This hill definitely pushes you to do better and if you don't have a good jump, it's a bit punishing," she said.

Up next for the young women is the FIS Nordic Junior World Ski Championships in Rasnov, Romania from Feb. 22 to 28.

"This was a good training camp. We got lots of training in and lots of jumps in, so we're all feeling really good and confident," she said. "My teammates are also feeling pretty good about it and looking forward to the trip together."

It will be Hamming's third time competing overseas as she competed in a FIS Cup event in Austria last July and a Continental Cup event in Norway in September.

"It's definitely different, but it's not necessarily a bad thing. It takes a bit of adjustment, especially the time change," she said. "I've never had a bad experience there. We've always had a good time."

As for the J2 (junior) event, Great Britain's Sam Bolton, 13, scored a 171 to edge out Cory Rogans and Max Stretch.