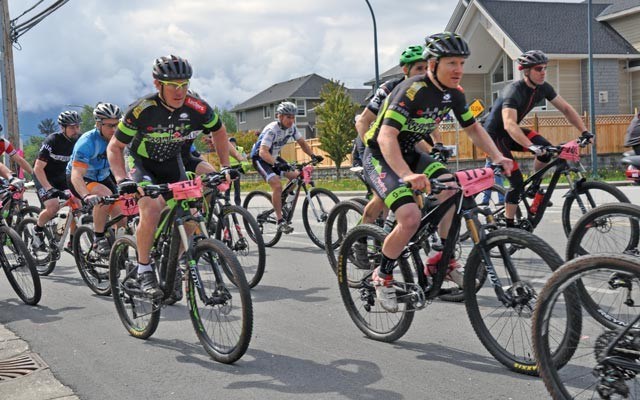 off to the races Team Whistler riders Michael Boehm, left, and Alex Capon take off with the pack during the start of the OreCrusher in Squamish on Saturday, May 10. photo by ben lypka / glacier media

Mahon Lamont didn't win the race, but he did win a race within the race during last weekend's OreCrusher.

The 18-year-old was the top Whistler rider in the annual Squamish mountain bike race held Saturday, May 10, with an 11th-place finish overall.

"It was a pretty good race," said Lamont. "It's only my second race back. I had a broken arm and was out for six weeks, so it's nice to be racing again.

Lamont wound up as the runner-up in the men's 14 to 19 age group, finishing behind Squamish's Rhys Verner. But the race also acted as a qualifier for Team B.C., and only the first two laps were considered. Since Lamont was ahead of Verner at that cut-off point, he went into the books as the qualifier's race winner.

With his win at the Sunshine Coaster the weekend before, Lamont has now won two of the first three qualifiers, and won't have to race the third one in Campbell River on May 31.

"I'm pretty happy I don't have to go to Campbell River, and I can do the Nimby Fifty," he said, as he would have had to miss the Pemberton race without winning Saturday's qualifier.

After Lamont, the next Whistler racer to the line was Trevor Hopkins, who was 15th overall at 2:09:26.9 — a pretty impressive result considering it was the Team Whistler rider's first day on a mountain bike this season.

"Last time I'd been on my mountain bike was last December," said Hopkins. "I literally got my new bike on Friday and built it up the night before the race."

Hopkins has been focused on road racing early this season, and he's earned some impressive results, including a third-place finish at the three-leg Maui Stage Race in Hawaii last month.

"I've done 10 road races this year," said Hopkins, adding that the transition back to fat tires was fairly smooth.

In another notable result for Team Whistler, Chloe Cross was the women's runner-up with a time of 2:24:21.0. She was about 15 minutes behind winner Sandra Walter, but was able to overtake fellow Whistler rider Petra Tlamkova late on the final lap for second place.

"There was a small gap and I knew that I could close it, so I just kind of put my head down and it all worked out," said Cross, who was racing her first OreCrusher. "I was super stoked to be second."

Meanwhile, Verner finished sixth overall, and had two other Squamish riders join him, Day and Moberg in the top 10, as Dwayne Kress was seventh and Eric Goodwin finished ninth.

Whistler's Michael Robinson rode to victory in Salmon Arm's Salty Dog Six-Hour Enduro on Sunday, May 11, winning the event for the second time in three years.

The race sees competitors try to complete as many laps of a course in six hours, with 300 metres of climbing per loop. Robinson finished nine laps and posted a 10-second margin of victory.

"Two years ago, I won it in 10 (laps), but the wet conditions slowed things down," said Robinson, who was ahead by at least four minutes at one point, but started to suffer late in the race.

"Laps 7 and 8 were the hardest and I had to ease off many times on the climb, as I was cramping a bit," he said. "I held on for the win, but only just."