Laoyam Eagles back on top 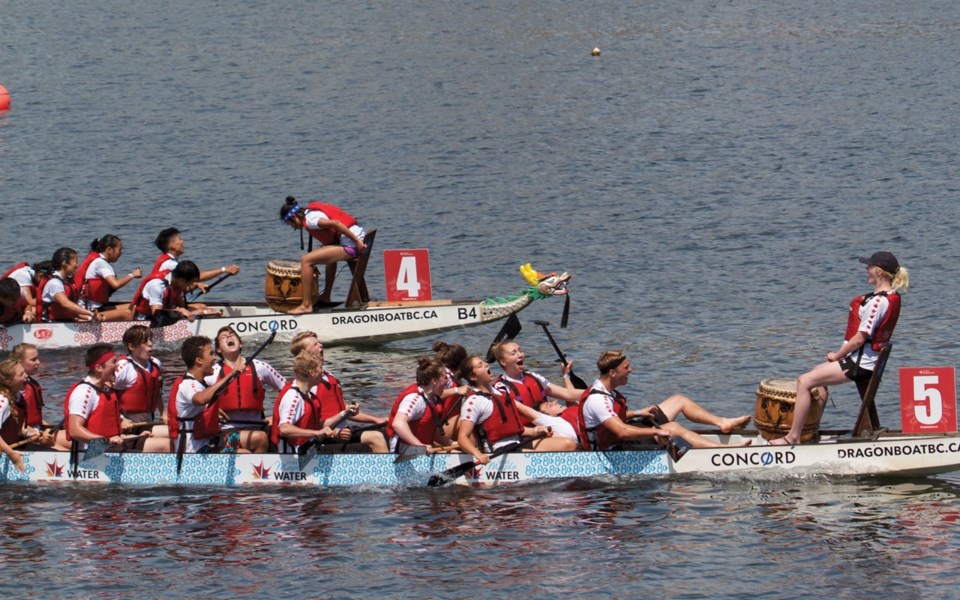 SOre and soaring After a long weekend at the Concord Pacific Dragon Boat Festival, the Laoyam Eagles emerged victorious in the mixed junior 'A' division. PHOTO by Patti Nott

It was easy to tell in Isaac Tetreault's voice how much reclaiming the junior grand final mixed championship at the Concord Pacific Dragon Boat Festival meant to him and the rest of the Laoyam Eagles.

"It's awesome. It feels great to be part of the winning legacy coming from Pemberton," he said on June 25, a day after clinching the win on the False Creek waters. "It's super awesome to prove it to myself and all my teammates and our coach."

The win came after three years away from the top of the podium, a dip that followed wins in 16 consecutive years.

"To bounce back after a couple of rough years feels really good—well, not rough years, coming in second is a great accomplishment—but to win gold again is awesome," Tetreault said.

MacKenzie Williamson, who is in her second year with the team, said she'd never seen the squad as excited as it was after securing the victory, dedicating the accomplishment to coach Hugh Fisher.

"It was pretty great for our team to give the win to Hugh. He's been wanting to have this win for a long time," she said. "Since we lost our streak, we've all been pretty sad that we've come in second, but it was amazing to finally have our team win first. We were all so excited.

"All of the Grade 11s and 12s who were there when the streak was lost—everyone was so happy and amazed. We were all so proud of everyone on the team for finally doing it."

Tetreault explained the crew was relaxed heading into the final, feeling minimal pressure and expressing confidence in some of its new approaches.

"We made a couple changes to our technique, to our stroke and to our start," he said. "We were focusing on reaching forward more with our hips instead of sitting straight up. We were trying to get more power at the front of our strokes that way."

As for the final itself, Tetreault noted the Eagles' tendency to have to play catch-up at times, but a strong start shot another jolt into the team and helped boost them to the win.

"For this race, we were neck and neck right from the start and our drummer, Jessie, got the boat super amped up and started yelling 'Pass!' right after the start. We took off from there," he said.

Williamson, meanwhile, recalled steersman Kolton Goochey yelling words of encouragement as the boat bore down on the finish line.

"He was saying 'We're in the lead! We're in the lead! We've got to keep going!'" she said. "We all just kept powering along so we knew we'd win and once we got to that finish line, we all looked up—because in paddling, you never look up—you've just got to put your head down and paddle. We realized that we did it and it was just amazing."

Meanwhile, in the 2000-metre Guts and Glory races, the Hens & Chicks took 10th in the women's event and the Bald Eagles were 11th in the mixed race.

Three flatwater sprint paddlers will head to Vancouver Island for the BC Summer Games next month. Landon Drain, Anna Beaudry and Alexis Balsamo will compete in the Cowichan Valley from July 19 to 22.