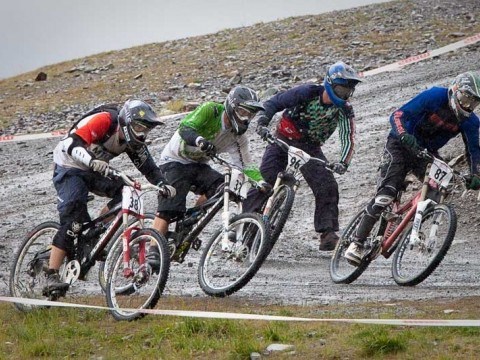 If there's a drop you've been eyeing, a trail you've been building up the courage to attack, or a line that you've always wanted to bag, this weekend is your last chance for at least seven months. Thanksgiving Monday, Oct. 12 is closing day for the Whistler Mountain Bike Park for the 2009 season.

Despite fears that the recession could be bad for Whistler, the bike park once again set records in terms of rider numbers. Whistler Blackcomb doesn't give out specifics, but Bike Park spokesman and Crankworx Manager Jeremy Roche said the increase was on par with recent years.

"We've definitely set our 11 th record in a row since the park opened and we're really excited about the results," he said. "Obviously the weather was very supportive, but we also put a big focus on increasing trail maintenance and putting out a great product for our guests."

Whistler Blackcomb also surveyed guests once again and while the report isn't complete Roche says the trends are the same as last year, with people travelling to Whistler from all over the world to ride the bike park and staying longer than the average summer guest. Riders are visiting from South America, South Africa, Australia, New Zealand and throughout Europe - especially the UK. In that sense the summer is starting to create a class of bike bums, people who travel to Whistler specifically for the summer bike months.

"What we're seeing is that people are coming from further away to ride the park and staying longer," said Roche.

The park itself is always evolving. It opened with a new section on Lower Crank It Up that eventually merged with Heart of Darkness. Additions were also made to Freight Train, No Joke (New Joke), and Blue Velvet, an intermediate trail in the Garbanzo Zone that should be completed in 2011. The extreme fire hazard prevented some new projects from taking shape, but crews kept busy armouring and upgrading existing trails.

"Our trail crews have been hard at work on modifications to trail sections within a lot of our trails, and more popular trails have seen facelifts over the 2009 season, and the feedback from the riders has really been incredible," said Roche.

The bike park was also pleased by the response to the Phat and PhaSt Wednesday Downhill Series this year, which had to capped at 200 riders after a huge turnout early in the season. As well, participation was up for Women's Wednesdays and youth DFX camps hosted by Whistler Blackcomb.

"Those are areas we expect to continue to grow again next year," said Roche. "We've seen a lot of growth already in the last few years with all of our grass roots programs, so we're picking up those beginner and intermediate riders."

Meetings to plan for next year are already underway, and Roche says there will be more to announce in the spring in terms of trails and programming.