Whistler's Stewart Walker scored a 151 to take home the win in the Juvenile boys division at Hazelmere Golf and Tennis Club last week.
Jul 2, 2021 9:00 AM By: Harrison Brooks 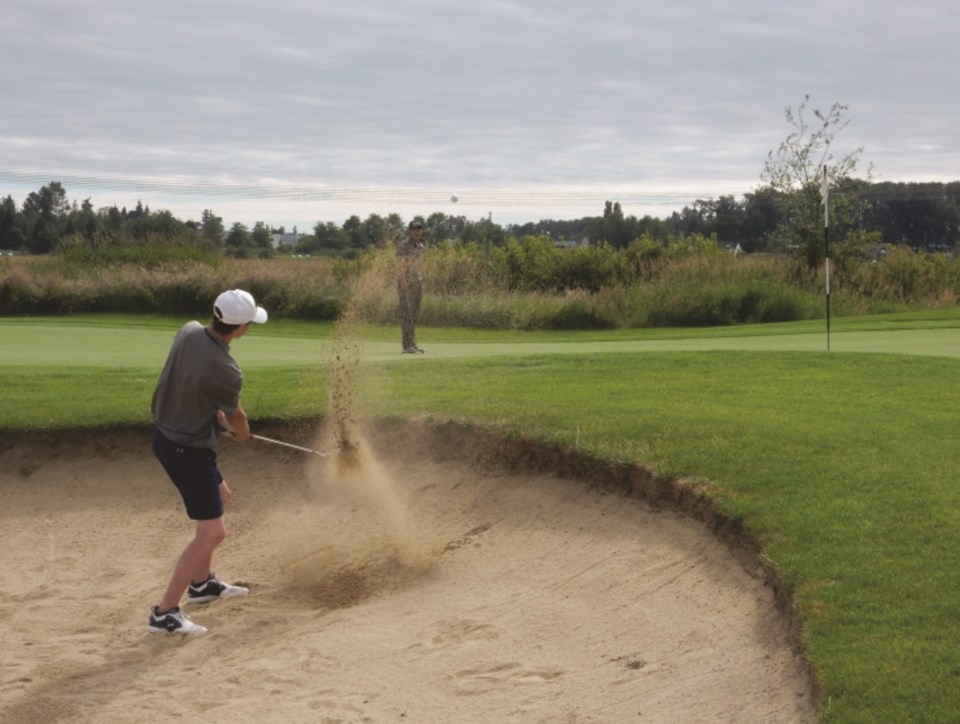 Walker chips himself out of a bunker at the Hazelmere Golf and Tennis Club in Surrey, B.C.Rhona Walker

Walker followed up his win at Golden Eagle Golf Club with an identical score of 151 to win the two-round tournament in Surrey.

“[I felt] pretty good,” said Walker. “I’ve been doing a bunch of swing changes, so I wasn’t too confident going in. I was just really trying to focus on hitting fairways and greens to kind of keep my score as low as I could … and it worked out pretty good.”

According to Walker, he and coach Graham Kehoe have been focusing on several changes to his swing to take his game to the next level, including speed and technical changes, like not dropping the club behind him at the top of his swing.

“His game has progressed over the last year significantly, more so because he’s just coming into that age when we were able to encourage him to work on his body a little bit more,” said Kehoe. “We had him basically go to the gym three times a week with heavy workout sessions strengthening.

“In terms of technique we were able to first strengthen his body so he could then shift his technique into a little more stable and repeatable golf swing. So it was a wonderful, perfect winter for Stewart in terms of growth.”

Because Walker wasn’t able to travel for tournaments most of last summer, Kehoe said they spent significant time practising on the parts of his game they normally wouldn’t be able to during a full tournament schedule. Initially, they set a goal to increase his swing speed to 110 miles per hour (177 km/hr), a goal Walker has already exceeded, clocking in at 112 (180 km/hr).

With the 16-year-old Walker in his last year of the Juvenile boys division, this season is all about preparing for the tougher competition he’ll face next year in the Junior boys division.

However, neither Walker nor Kehoe are too concerned about the challenge.

“I don’t think there is going to be any challenges,” said Kehoe. “I think that as long as we prepare him and continue to strengthen and give him the speed and tighten up the short game, it’s all going to be there for him. So I don’t really see that as a challenge moving forward I just think that as long as we’re prepared and he has the strength everything will be fine.”

On Monday, Walker made his way out to Morning Star Golf Club on Vancouver Island for the B.C. Juvenile Championships.

“I’m thinking it’s going to be the second toughest competition behind the Canadians,” said Walker. “So, I think it will be really tough competition, but it will be great getting to play with really good guys.

“I’d ideally like to come top 10 and then maybe even improving on that, but we’ll see.”

Moving forward past this year, Walker has his eyes set on getting a scholarship to a NCAA Division I post-secondary and then “see where it takes him” after that.

“We’re just really looking forward to watching him progress and grow. The community is supporting him very well, like all of the club members are extremely supportive of Stewart,” said Kehoe.

“Our hope is for him to continue on and then in the future to get him into a great university and he can play at that level and then progress from there and become a professional golfer on the playing side of things.”